A lilttle Backstory for Ryoma and Oryou So cute and yet it’s so sad. 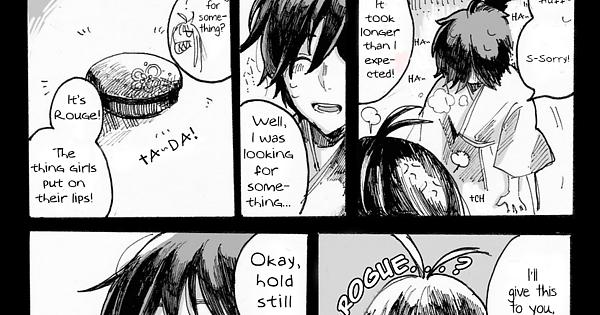 I don’t like how almost every fate character has a sad story. I was expecting something funny from them, not this…

Hmm… That got me thinking, are there any Fate characters with mostly happy story?

Only one I can think of off-hand is Taiga. Other than her dad being affiliated with organized crime, she has a pretty normal life.

does tokiomi count? Just because his back story wasn’t really expanded upon

Well…we knew he died at some point and that it probably wasn’t in his sleep at a luxurious home for retired Japanese historical figures. Not a really surprising story

Btw I’m really feeling Sakatomo+Okada vibes. Sakamoto and Oryou are more like a buddy cop duo, but the romantic subtext with Okada is definitely there.

Tokiomi Tohsaka? Rin’s dad? Err… I don’t want to spoil anything, but I definitely wouldn’t call his story “happy”…

I guess Shirou in Heaven’s Feel because he no longers wants to be a Hero and just be with Sakura.

Same wthing with Shiki just living her life with Mikiya.

Does the novel have something about his back story? I mention him specific due to his lack of back story in the anime and obviously ignoring what happened in it

Oh, we’re ignoring all of what we actually see in the story? I assumed we’d include everything about the character’s life. That changes things, I guess.

Btw I’m really feeling Sakatomo+Okada vibes. Sakamoto and Oryou are more like a buddy cop duo, but the romantic subtext with Okada is definitely there.

I get your point but i just want to point out that just because two people like each other doesn’t mean they have to say it outright (For example, you can tell Kobayashi does like Tohru but never actually says it in Maid Dragon). Besides, Ryouma being so sefless and Izou being a childhood friend of his does explain why he cares for him.

That’s why we call it subtext.

It’s speculative, not implied to be canon.

I know, just wanted to give that other side of the coin if you will.

I gotcha, but it kind of goes without saying

Still wanted to say it. Aww, you mentioned Dragon Maid, and now I am depressed again. Poor KyoAni, Dragon Maid season 2 will live on forever in my imagination…

Since the manga is showing events before ryoma becomes servant and you only mention taiga’s family, I thought we are just talking ablut background. (considering how taiga seems to love kiritsugu and he went and marry another woman and died, that isn’t exactly a neutral life experience).

Like Gou said, ryoma probably didn’t die in a retirement home content with his life. In fact most heroic spirits probably died with some regret since they are summonable by the holy grail to begin with. So I guess characters, particularly servants, have sad background stories just by default

I never understood this meme. Between this and going back and forth over stuff that’s already in the story, I am this lady right now: