Hi! I need some help with ORBS. I’ve saved up around 130ish orbs, could get around 160, but don’t know where I should spend them.

I have the following options:

No specific order, but I just want some good new gen units. I know it’s really up to me and whether I like a specific unit or so, but I want to know if it’s worth saving and waiting. It’s been while since I last spended some orbs to summon. Just free summoned 5 stars.

Please and thank u!!

I’d wait at least for the mythic banner announcement before deciding, should be in a few days

CYL is in mid August

don’t know where I should spend them

If you like armored units, Spring Idunn is definitely worth pulling for as a long-term investment. She has a crazy good Prf and her duo skill is extremely enabling. The entire Spring 2020 banner roster aside from Spring Fir carries easy-to-activate penalty negation which is a very powerful effect (plus Narcian’s weapon is inheritable), but they are all seasonal so you won’t see them for at least a year after the banner closes…so every other unit except Spring Idunn might not be worth trying to pull for if you want to seriously use them (which largely entails getting additional copies for merges, this is not kind on one’s orb stash).

Aside from that, I suggest the usual advice others have already given: save orbs until this month’s Mythic banner lineup is revealed, then make a more informed decision. The banner(s) with the highest concentration of best-scaling heroes are the ones you want to pull on.

I want to know if it’s worth saving and waiting

well i wanna know if it’s worth lol

Saving is always worth it. At IS’s speed of powercreep these units will be as good as non-invested Gen 1s in 6 months (while that is an obvious exaggeration it is sadly not as far from the truth as it should be).

It’s best to save. 160 orbs still probably isn’t enough for a guaranteed 5*

Spend spend and spend, then become disappointed like I do.

My opinion on each banner mentioned:

With only 160 orbs, expect to only get one 5* focus hero on whichever banner you go for–any more than that and count yourself lucky!

Save more! 130 orbs is far from guaranteed a unit

If you really want to spend then it’s your funeral.

But wait for the mythic banner that might have really good stuff on it, and the rates are higher. 130 orbs on a mythic banner looks pretty good, 130 on a regular banner… not so much

Haha it’s not a bad thing

You haven’t posted any Davie504 memes yet so… I’d say you’re safe. I think

If there isn’t anything you’re looking for specifically, then I’d say save. If you don’t have a character that you love or fodder that a character that you use a lot needs, then there’s not really a point in using orbs for them. But if you dont really care about any of that, then I’d still say save because in a few months these units could get powercrept by the new units then

One more thought–I think something usually overlooked about orb value is ignoring the impact of color sniping. The more specifically you try to snipe on a banner (fewer colors), the more prone to being “screwed” you get. This is because you are pulling on fewer orbs per circle, which means you are potentially ignoring orbs on the circle that may be 5* heroes in favor of pulling for the hero(es) you want of particular color(s). This effect worsens the more colors there are in the 5* focus pool for a given banner.

The bottom line? To get the most value out of your orbs, pull more on banners with more color diversity with regards to the heroes you really want–more heroes of different colors you really want on the same banner = higher chances of getting one of them in fewer orbs. That way, while you use more orbs per session, you have a lower chance of missing out on a 5*. Of course, this is usually only ideal–sometimes you just can’t help but snipe for a character you really, truly desire.

Anyways that’s a great analysis, I’ll read the main post and give my two cents as well

You haven’t posted any Davie504 memes yet so… I’d say you’re safe. I think

sometimes you just can’t help but snipe for a character you really, truly desire.

Me whenever Idoun is a focus and the other colors are irrelevant:

Now, the others have given really good advice but I’d like to comment on some things as well:

First: HOLD ON until we have the full line up and the identity of our new Mythic Hero, I can share my chart which has the confirmed present L/M Heroes for this banner:

In case the Mythic Hero banner isn’t that interesting my recommendation would be this: if you like Idoun you’re of culture

it’s worth pulling because she provides incredibly strong tanking capabilities with her [Zephyr Breath] which grants:

Just by having an ally within a 2-square radius or by having a visible buff she gets all that active at once, {ward} skills for example are very useful (if you’re running an armored or dragon team her teammates can use such skills to make her a tough one to take down and it has good synergy).
She even has a Duo Skill which grants this for a turn in a map: 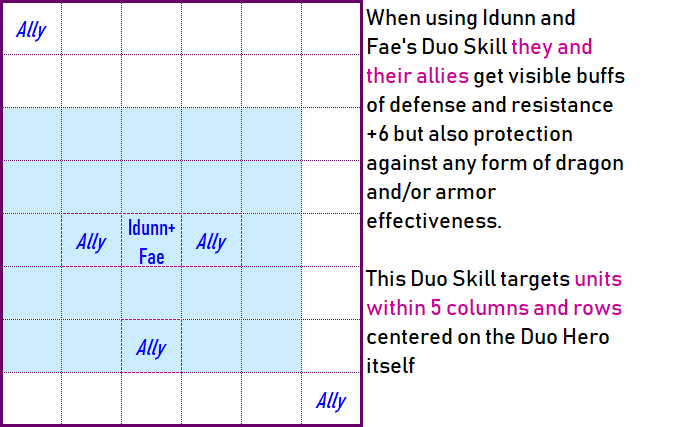 It’s a valuable Duo Skill in the player’s hands on an armor/dragon team as it negates their weaknesses.

it’s nice to have some backup to support your summoning needs, I’d have been alright if I were to get her

Sounds good and since you said you love Three Houses… but attachment towards characters should factor in to sort out who you need more than someone else.
If you like Lysithea though you’ll most likely benefit more from the CYL4 version, all the Choose your Legends banners occur around mig-August so you have time to prepare. Even if you roll now you’ll still be good for saving

But I’ll agree with the others, save your orbs at least until the Mythic Hero is revealed, if you’d like to you can bring back this thread once you see the announcement so that we can provide a bit more of insight

Thank u very much guys! I’ll wait until the Banner is announced and save my orbs.