Hey guys! This is a separate thread I had planned to make for my summoning quest for Sara back in her debut, as well as sharing appreciation and progress in FEH for my favorite Thracia girl!

If you’d like to read the review I did on her banner, here it is:

Hey guys! New Heroes banner, and the perfect one to start the year for me… I’ll advice you, I’ll talk a bit more than what I normally do, about a certain character’s addition (hint: look at the cover below), so I needed three posts to share the whole review.

Did you know Sara has her own scene theme in FE5? If not feel free to listen to it here, I felt this should go first because you can scroll down while listening to it if you like. 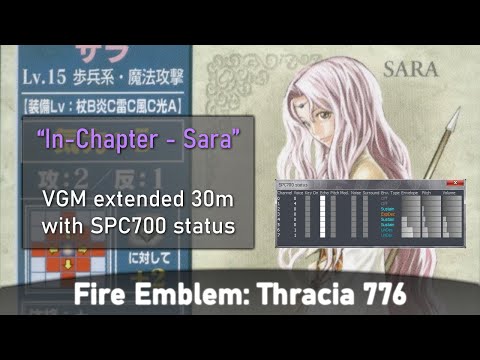 Now, I’ll talk about the unit I’ve been looking forward to see in FEH the most: Here’s some fan #art I found both before her debut and after it, as well as her official #art:

I’ve decided to remove the clutter that was around here, the video should be better to look at: 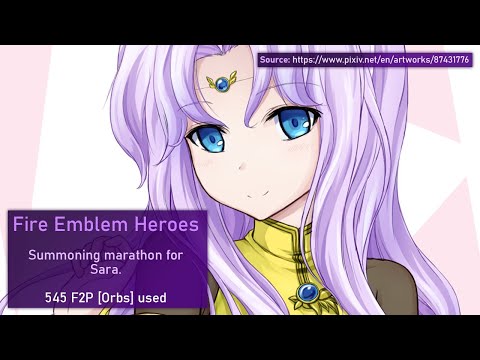 I’ll show the build I use in my main account, as well as that of my alt right below, feel free to read the commentary if you like, otherwise the builds only are on the second block:

Thanks so much for reading through this thread, I appreciate you took the time to read thru it and I hope you’ve enjoyed it.

While my summoning for her on debut didn’t go so well, I was still overjoyed with just having her, she’s just too lovable.

I wish I got a sara while pulling, trust me I pulled colorless each time they weren’t any blue orbs and that happened a lot.

I hope you get her soon enough, she’s great.

Still feel pretty great to get Thracia content, I almost feel like playing the game again.
I remember hoping that Sara had an epic prf.

Congratulations on finally getting Sara! I hope you have better luck getting more copies before the banner ends. Which IV are you hoping for?

Spent a ton of orbs and only got pitybreakers and the Spark of Sara Squad rise up! ;_:

Oh my god you even got hit by Larum and Nina too, what is this banner’s problem?

So sorry to hear the overall session didn’t go so well. Fortunately the banner’s up for a while, and there are a lot of free orbs we should be able to collect yet, so hopefully later pulls turn your luck around. Godspeed, friend.

Sorry pulls weren’t great but glad you got the spark!

Yeah, Larum is the only one in her game which is why I haven’t foddered her B skill… yet.

Thanks! For now I’ll aim for a +1 but maybe I’ll go and get more. As for the IV, +attack feels great, I usually like working around super assets but +spd is a tempting pick too…
But I’m leaning towards that extra of attack since her healing skills are great with that high base and more doesn’t hurt.

Spent a ton of orbs and only got pitybreakers and the Spark of Sara Squad rise up! ;_:

Really though, this banner has been a letdown in terms of summons but I’m happy the spark system was of help for us to get Sara. I wish you all the same and that we can +10 Sara soon enough.

Thinking about submitting an emoji based on her.

Man, 54 atk before merges, dfs, and neutral. Not counting the push

Fully merged with an atk boon would be NASTY

45 base speed is a beautiful thing to see. I’ve honestly been tempted too. 63 is an amazing attack stat, but 59’s pretty solid too and I don’t know if she needs the extra attack? Honestly, with how the summoning went, she might be a Legendary Julia scenario, where I just cannot draw what’s considered their optimal boon, and go with whatever I get and find out it’s still great.

At least we know which banner we’ll be voting to get a rerun as soon as it’s available. Gonna need that second spark at this rate. Anyway, it really sucks that you got so many pity breakers and only the one Sara, I know how much you were looking forward to her. Major F for that

She looks great right now tho, and thank God for the spark system. Hopefully when you finally break pity you get multiple Sara’s in the circle

Very impressive! Honestly, I think it’s nice to see people so attached to characters from video games. One of many ways to show how much they love and appreciate the game. And, Sara is definitely one of the most powerful staff users in the game with that Spd of hers.

Nice pulls but sad for Sara

If I could, I’d take that Ellie and summon a Sara to compensate

At least you got one though. You’ll get more of her though so don’t give up

I would give her to you if I could, anything for best FE5 girl.

Also, thanks everyone! Even if it wasn’t a great summoning session, I’m enjoying Sara and I’ll be looking forward to showcase a +10 one someday with all manners of skills inherited.

I look forward to it

though kinda bummed Linoan didn’t make it in the game yet but that’s still okay, and Miranda looks like a likely project for me…

but rip on the summoning

I share your pain, having also summoned a helbindi I really don’t want. Many thanks everyone! Honestly, I’ve missed getting this badge, it feels like I’ve contributed to something people really enjoyed despite the adversities, I did too, writing this post was a pleasure and best FE5 girl deserves it.

After the emotional hit this banner landed on me, I’ve slowly started to recover and now I feel fired up, ready to finish up my review.

I want to share my Sara in FE5 but I lost my old files and I’m making a completionist run, currently I’m at chapter 5 and resuming the plot however I can for my understanding, I can share the PDF once it’s done, however. Thank God for the spark system but man you deserve more Sara. Especially with this huge appreciation you have for her and the one year wait you did.

At least you got her and are happy with her! So congratulations to you! I hope more copies of Sara are fated for you in the future! FEH did a good job translating her in voice and combat. A lovely unit with a solid and unique prf is great for any 5 star and Sara got well treated.

I’d spark for her but I have a lot of priorities for my current units but maybe she’ll come to me during a free summon someday? I can only hope she hears my inner voice for her.

Why is Nina still in the regular pool IS? That one hurts me seeing that. Should’ve been Sara