I had intended to make of this appreciation post a surprise of sorts, been thinking of creating it for the past few days and seeing I already like a lot the character I’ll cover… why not?

I’ll also mix in a little surprise as well due to a special date being celebrated today.

So, who this time? Well…

From: Fire Emblem: Genealogy of the Holy War

That’s right, one of the motivations for this thread is her, so let’s get started.

I tried to write this bio from memory at first, I’ll probably try to refine it later with what I find in the Wiki, so for now, there’ll be no links, etc. But feel free to notify me if you find any errors and/or missing info.

Why I appreciate her?

Although, sadly, she doesn’t have as much so here are 5 of the ones I liked the most.

At first, I was against using my free [Forma Soul] from the fourth anniversary since it’s extremely valuable and I wanted to use it on a seasonal I was sure I loved when they appeared.
I was also mentioning the possibility OG Idoun could appear as Forma, but honestly? I decided not to wait for her, because I already have her at +7 and she’s getting all the skills anyway, so I thought someone else deserved to be recruited this way… I slowly convinced myself I wanted Altena, until it was 4 in the morning when the [Hall of Forms] ended and finally, decided to get the last merge… yes, that copy was all that I needed to fully max Altena out, and I would love to share her with y’all: Gatrie has the [Spirited Lance+] which will help Altena charge special skills faster with an easy to meet condition, I can also get [Fort. Def/Res 3] which she could use when she gets [Wyvern Flight 3], but the C-skill is already the one I want, her weapon is also seasonal but I live to spoil my favorites in this game so…

Btw, her support is with OG Leif, who I got the other day with his Resplendent skin, but sadly I don’t have anything for him yet.

Yes, I said at the beginning of this post and in the title that something special was taking place today, it’s…

That’s right, this game was released exactly 25 years ago, I’ve been secretly working on this post in hopes to make of it a surprise, and although I can’t really make much for the anniversary, I wanted to share my appreciation for what I see as one of the two games that compounds the pinnacle of the series, led by the true creator of the series, Shouzou Kaga: He’s the true creator of the series and worked on the first five installments in the series, which includes Thracia 776… he left @Intelligent_Systems shortly after that game was finished, and founded a company named Tirnanog (which is named like one of the cities in Isaach, a country to the north east of Jugdral), that company released first an Emblem Saga game which was later renamed to TearRing Saga: Utna Heroes Saga because Nintendo reported the copyright infringement from the OG name and they managed to sue Kaga for it.

Today, he still lives, and has developed a game that draws on a lot of elements from Fire Emblem, known as Vestaria Saga, you can download it officially for free in its website, but the game will be in Japanese… there’s an English version though, but it’s paid:

Back onto the previous topic… I recommend checking out this Tumblr archive, more fan #art is bound to appear in these days!

I played the game recently and made it to the grand finale, it was truly beautiful, the music is outstanding and very memorable, so is the cast… there’s a lot I firmly appreciate in Jugdral and the games developing on it are worth playing, I recommend them!
As for me, I’m playing with the latest translation by Dark Twilkitri, instead of the more updated Project Naga because I’m a diehard elitist /s… jokes aside though, I was never too fan of the newer names, although I’ve grown to adapt to them without problem thanks to FEH, I like more the special charm I feel in those older translations, like… [Volcanon] > [Bolganone].

Plus the UI fonts used in Project Naga really look worse compared to the ones used on Dark Twilkitri, which feel more FE-like Imo. All in all, I appreciate all things Jugdral, although I’m not a resident expert of its lore, I’d be happy to continue indulging on it and help others with character usage, be it on the vanilla game or in FEH.
It’s probably known that I’m extremelly fond of Julia though, who I will post about in 9 days because I would like to align my post with the day of her OG version’s weekly revival, and I’m planning to make it something grand, so please look forward to it. Too bad, but I was close enough to all As.

I’ll end this section by sharing a theme I offered to extend, it’s a rather obscure one but not as certain well hidden pieces (and I meant it in the sense it’s kinda ominous but I love it) — it plays in chapter 9 of the game after Leif talks to Altena (it’s NOT a character theme for anyone!) and the latter goes to ask Travant for confirmation about the truth of the Aed Massacre and her parents: 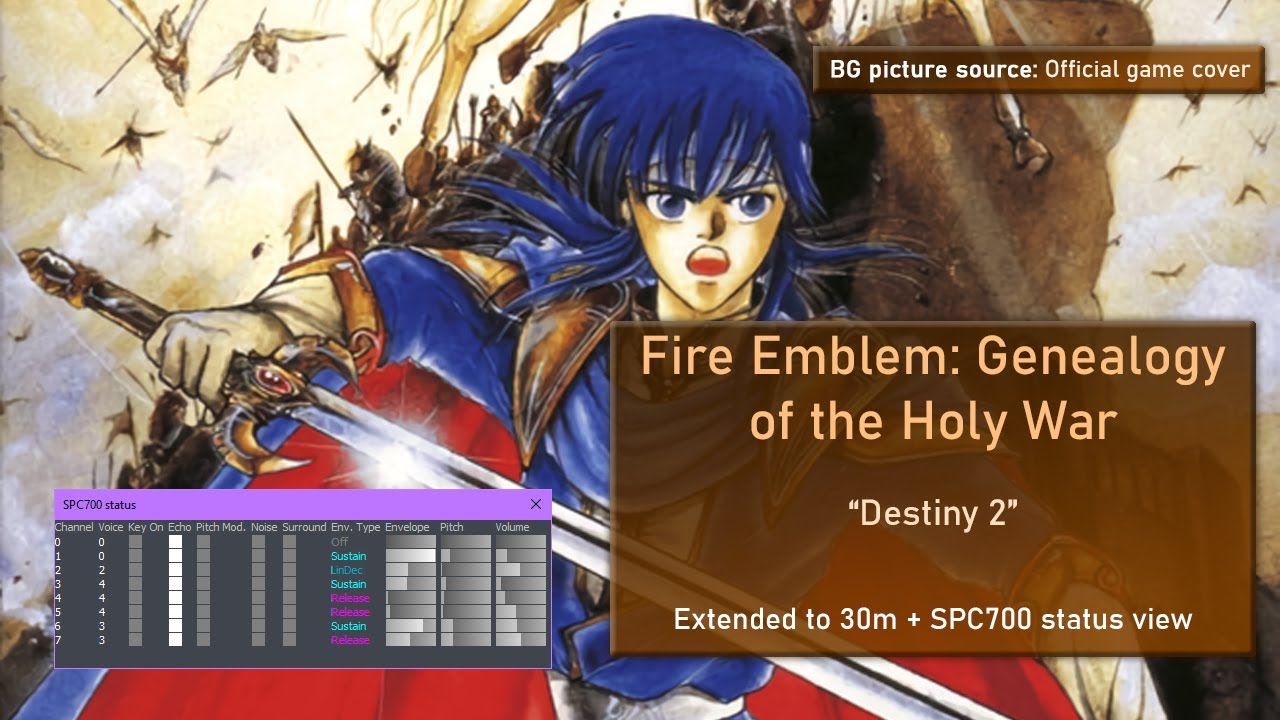 Thanks for coming to my TED talk yet another appreciation post of mine! I hope you have enjoyed the read.
As a side note: coincidentally enough, it’s also the 122nd anniversary for my favorite football club!

Club Nacional de Football (Spanish pronunciation: [ˈkluβ nasjoˈnal de ˈfuðβol], National Football Club or simply as Nacional) is an Uruguayan football club based in Montevideo, Uruguay. Founded on 14 May 1899 in Montevideo, as a result of the fusion between Uruguay Athletic Club and Montevideo Fútbol Club. Although its main focus is football, the club hosts many other activities including basketball, futsal, tennis, cycling, volleyball, and chess. In domestic tournaments, Nacional has won the...


Their story is summarized here, it’s a rather unexpected coincidence and over those 5+ years sticking to the Fire Emblem series, I’d have never thought about this.

But it’s so nice, that means double the party.

Even if they’re not the best performing team, I don’t care, I support them because it’s like a passion and their legacy has been no small talk in my country.
So, happy anniversary for them too!

As per usual, feel free to revive this kind of thread if you would love to share any form of appreciation to the character in context, in this case, Altena!

…Now, to play Secret of Evermore.

Hit up that subscribe option at the #poll in my Silque appreciation thread or request me here if you’d like to be notified of future releases.

With so much premium fodder. :D

Will we get a genealogy bridal banner?!^^"

That’s a great looking Altena you got there! Congrats on finishing her

I know I made my own post about it, but man she’s been really good for me too. I love Altena she is very badass but also kind and compassionate and I love her design. She got translated into feh very well, top tier art and very good voice acting, also good statline and being a 4 star is even better, she is at +9 but I haven’t figured out a build I’m satisfied with yet

Altena’s story is very good. I think I come to like her more than Leif. Actually, I do not know.

She is a literate and older Nino. But it reminds us a lot of the kindness, only more mature.

Her being downgraded to 4 * and having her gun was great. And its design I think is very beautiful. And a woman in Wyvern looks good. It refers to Minerva’s words why she chose Wyvern and abandoned the pegasus.

The idea of ​​Genealogy / Thracia is brilliant. Just see uncovered with Sakurai, Sakaguchi and others.

Not to mention that it also had engineering and ideas from some of the greatest geniuses for me in games. Gunpei Yokoi.

Kaga left for fights and we know the reasons. But Nintendo has a cool thing. Keep the essence. And it gave me joy to know that he talked to the people of Nintendo and everything was fine. When the remake of the New Mystery came out.
He left us that legacy.

Triangle of weapons, permanent death, each character is important, supports and inherit power.

And to think that Fire Emblem was already modern for its time. But unfortunately it was only playable in Japan. There are good stories about that.

And just thanking you for the post is not only your favorite game but also Mr. Sakurai’s.

Your Altena is great and happy for your conclusion.
I like big text even more if you want to write. The only big text I’m afraid of is the Prf in Feh.

And your club is big here in South America. I hope soon that the fans will be able to go to see their team in the stadium and feel the human warmth.

I think I had an opportunity for Spirited lance but it was that or some other premium skill like Guard Bearing or Bracing stance, so I chose the skill instead. I really wanted it for a pseudo special fighter build.

Kind of thinking of running deflect melee to block first and second attacks to charge up her eventual Ignis and go BIGnis, or maybe just sol/noontime to really screw with people since she has Fatal Smoke.