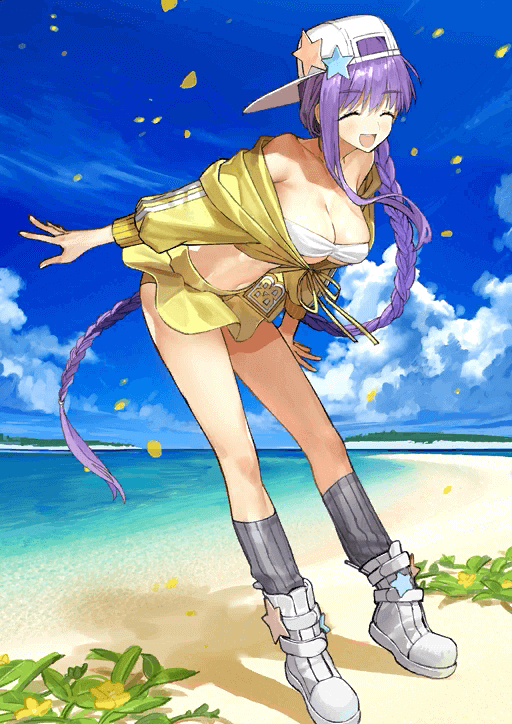 I’m going to start by saying I absolutely disagree with the “A” placement GP gives her. BB is a gimmick, pure and simple, that even when it’s needed (never) is difficult (at best) to use.

Self-Modification EX continues to be a wonderful skill. The crit damage + crit absorb, both for 3T, is a great way to increase your damage potential. But BB…isn’t JAlter, and doesn’t have an extra ~2k attack laying around to make the best of this. With her neutral damage (both against classes and in general being x1.0) this raises her damage on crits to about the level of actual class advantage…but still somewhat low, bc she’s only got 11k attack.

Her 2nd skill is bonkers, with so many effects that other skills wish they were. It’s the 50% charge of Eresh or LArtoria; the 50% NP Damage of Helena (Caster); the Heal/Evade of…well, a lot of people have Evades and Heals. With less CD than many of those skills have for their lesser effects. If it has any weakness, it’s that the Buster buff of 20% is selfish instead of party-wide like Helena, Sheba, et al. have.

Her 3rd skill is the gimmick. Passive 2030 is good, really good, but locking command cards for 3 turns…it isn’t that I don’t see the potential use, it’s that I don’t see the actual use. You can go on YouTube/billibilli/etc to see many examples of it being used, don’t get me wrong, but how many get to do that on the first time vs. countless resets for card RNG? Most 3T strats (even if you’re not Arts or Quick looping) require as little RNG as possible - even the slightest bit off, and your buffs run out and you stall. Yes, BB can guarantee that your Archuria gets an NPAAE brave chain for 3T straight to NP 3x in a row without a problem…but how often is that needed, first of all, and again, how many resets to get both Arts cards on T1?

Now, for BB’s NP Damage, even with buffs (NP+, Buster +) it isn’t good. The OC effect of maybe loosing another Charge can be nice for CQs (Drain is one of the best uses of Orion’s NP) but the damage will be potato most of the time. For Welfares, I didn’t check the full list but Nightingale, Jalter Lily, Rider Ishtar, Santa Alter - all hitting harder on neutral targets vs her for wave clearing (heck, Caster Liz is only about ~500 or so lower on average and she’s entirely forgetable). Do they have the utility BB does? No, not really. I’ll admit that.

BB just seems out of place. For wave clearing and damage she’s just bad (but her NP and 2/3 skills imply that’s the intent) and for niche supporting, her skill is just too niche and RNG-based to be wonderful.

Summon for the memes in my opinion.

Going to resist restating my opinions on her in detail for the Nth time.

If you love her, you can’t go wrong no matter what.

Do I need her? No

Do I want her? I’m going to start by saying I absolutely disagree with the “A” placement for her. BB is a gimmick, pure and simple, that even when it’s needed (never) is difficult (at best) to use.

I absolutely disagree with the “A” placement for her

It’s BB we’re talking about here. I’m sure she hacked the GP servers and changed her own rating.

But yes, for the most part she’s mostly a gimmicky Servant to use. I’m rolling for her because

We get to be the gimmicky boss fight to the enemies’ mobs.

I am sort of interested in her because she seems like a beginner friendly character. Her materials are very easy to collect for ascension given they are all monuments. Her actual materials are not oppressively bad until later upgrades and honestly, her skills by default are definitely above average to the point where you do not need to rush the upgrades anyways. They start stronger than most.

Other than that, I see a lot of potential in her just locking brave chains for my support unit. That is great for me, someone who has virtually nothing, because, well, I need my support to carry harder. 3 turns in a row will definitely allow them to do a lot more damage than my Jeanne could. Plus some passive star gen given I have no 2030 or Merlin. But once I do, well, you can just plug suit her to lock cards long term.

I feel like her “gimmick” is being slept on just a little bit. Yeah, it is a gimmick. Yeah, there are likely better options. But for people without diverse rosters… Seems hard to go wrong. And in some cases, it is just about as optimal as you can get.

It just always seems like people have assumptions about needing her to be really powerful all the time when in reality, she has her niche, just like most every other servant. She is definitely average at the very least and I never really see people so avid about below average servants being a waste unless you love them. I have no clue why BB is somehow so bad that it requires warnings. Lul.

Summer BB with her 2nd asc costume is the best Summer BB and you can’t change my mind.

I want to try and combo her with Hokusai. That should be fun.

Spartacus is a beginner-friendly character. So is Arash. BB, not as much considering the investment required.

Many people think BB’s card trick is the best thing ever because they saw a cool video once. Hence the “warnings.”

Which they are really cool when they work imo. Double BB and locking a hand for 5 turns straight I just don’t think you normally need that.

That is great for me, someone who has virtually nothing, because, well, I need my support to carry harder.

I will admit I never even thought of this, though - a blind spot on my part.

Quoting myself from another thread:

I’m whaling for BBikini, myself. Mostly for two, big reasons.

Also, she seems super fun to play, looks great, and I look forward to plugging her into my frontline to lock Musashi buster brave chains. Not because that’s a particularly strong strategy, nor usually even necessary, but because I like making really, really big numbers.

So, in short, I agree. BBikini is a win-more servant whose gimmick is more for cheesing CQs on pure luck (and multiple attempts), or just showing off. But that’s why I love her.

I max grailed and gold-Fou’ed a triple-buster CQ specialist, do I look like somebody who is concerned with efficiency ?

If you can’t solve a problem with buster brave chains, you aren’t using enough. BB-Chan will help you, Sempai!

I thought Spartacus and Arash were more for farming. But, honestly, I can just raise the BB way easier. I sort of just feel like I need another level 90 at this point, I might do them later because my priority is to get servants who can handle the challenge quests and stories. Mostly because I do not really need to save time on farming.

I still feel like the card gimmick is relatively powerful. Like, why is it not? Rng is really not a factor for me when I am specifically using it to reduce rng.

If there is something I am missing, I would love to know, because I am planning on pulling for her and do not want to regret it.

Clarification: you don’t use BBQ to “reduce RNG.”

She still requires you to get your desired caRdNG in the first place. If you never get a good draw, or if your cards are split too often between the 3-turn shuffle sets, you’ll never get to actually use her 3rd skill for it’s main purpose.

Is her gimmick strong? Heck yea… when it actually happens. Let’s say you’re knee-deep in a CQ or a story boss and you don’t get your ideal card set until like turn 5 or 6. Is the gimmick still powerful by that point?

Her gimmick is powerful in a vacuum. However, it is not consistent at all, which makes it immediately not-powerful depending on the observer’s opinion.

Farming is a universal need, and 1* Servants require vastly fewer resources to raise. BB’s damage potential for most uses is easily matched or eclipsed by both of these options.

Not to mention Arash comes with a free Order Change, a gimmick that is far more universal than BB’s.

To Venatorio’s point, BB doesn’t reduce the need for good RNG. Whether or not she does any good in that respect is in itself an RNG proposition.

I think it’s important to note opportunity cost, as well. Is Faceless Moon potentially very powerful? Yes, it undoubtedly can enable some ROFLStomp three-turn buster brave chains, or whatever. But is that possibility better than running, say, Waver?

I’m going to start by saying I absolutely disagree with the “A” placement for her. BB is a gimmick, pure and simple, that even when it’s needed (never) is difficult (at best) to use.

Forgive me if I am wrong but it is my understanding that Rabbit uses a Grading system rather than a ranking/Tier system. He isn’t putting her into the A tier out of all servants but rather looking at her at the role she is supposed to have and grading her on how well she does what she is designed to do.

So an A grade makes sense. She is an AoE servant with a battery, one of the strongest 3 turn steriods, the ability to decrease enemy charges by 1 or more, and a unique utility that synergies well with her Burster kit.

Really, if it wasn’t for class she would be considered quite amazing. I think the A grade is quite appropriate as those who use her on JP all tend to say she is a good solid servant…just one with a rare niche due to her class.

Just wanted to lay out some math here. the probability of hitting something like 2As or 2 Qs on T1 (assuming they only have 2As/2Qs in deck like Kama or Archuria) is 9.5%. You have about a 50 % chance of hitting an opening hand with 2 Qs from DPS within 7 resets, that goes up to 80% within 16 resets.

For me that’s a pretty reasonable amount of RnG to stomach, for others maybe no since different people have different tolerance levels.

It’s important to keep in mind that the CQ/TA memes that BB memes “enable” usually can work out fine without her help. If your damage is good enough even with 2 Frontline buffers, resetting for good card RnG for that run more likely to get you that clear than resetting for BB.

If her role is AoE damage, she is behind most other 50% battery Servants.

If her role is support, the most impactful part of her kit is very all-or-nothing and not always relevant.

An A rank for NP1 is a tad misleading.

I think Wyan was referring to GP’s new letter-based Tier system and not Rabbit’s. Seems like she has a decent kit on her own despite the long cooldown.

Third skill gimmick could be annoying when trying to use it for the star gen per turn, but on the other hand if the cards line up it could be fun. For example, it would be neat to card lock Summer Ibaraki when she has an AQQ chain ready so that you can loop easier. Though in general the gimmick will mostly be something fun to mess around with which can sometimes be super useful but isn’t going to be reliable unless you’re willing to reset a bunch.

If her role is AoE damage, she is behind most other 50% battery Servants.

Again, it is a grade not a rank. The other 50% battery servants are irrelevant.

An A rank for NP1 is a tad misleading.