RAID BEGINS AT MIDNIGHT EST ON THURSDAY THE 6th 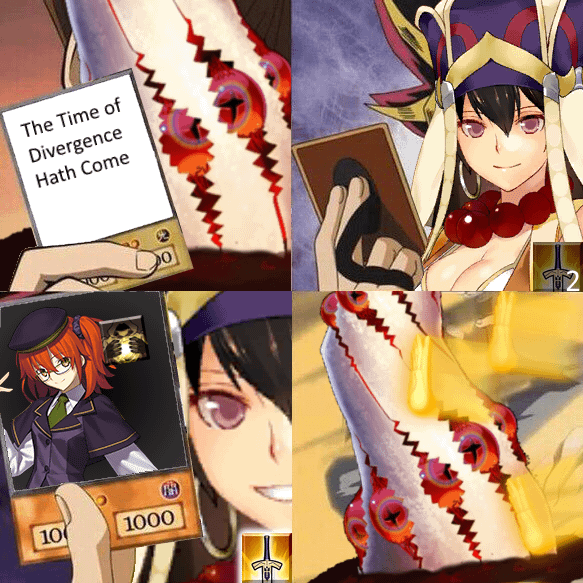 Still with me? Cool. Let’s go over this.

In the Lady Reines Case Files Collab event (expected during Golden Week, so as April turns into May), we get to bully the legendary Barbatos.

If you were around for Solomon’s release, I’m sure you have plenty of fond memories. The hearts! The gears! The pages (remember when we were all hurting for pages because Hyde Park never drops any?)

The whole point of the raid is to spam OHKO Barbatos as quickly as possible. This is where you chew through your reserve of apples.

Because, as you can see, the rewards are excellent It drops QP. And scales, hearts, pages, GEARS, lanters, DUST AND BONES, and assassin gems…all are very good rates. Thanks to @Niko for providing drag rate data. (Translated version; scroll to the bottom.)

Average QP/run looks like it’s a ~1M with an average minimum of 700k per run.

Farming Barbatos is much more efficient than farming QP from the daily quests because of the materials you get. If you’re QP farming with apples, STOP DOING THAT. So, let’s talk about how we can pound this ■■■■■■ in the most efficient way possible.

Barbatos is an Assassin with 500,000 HP and no break bar. Upon entry, it’ll debuff you with one of { Quick down, Arts down, Buster Down, HP recovery down } or it’ll buff itself with crit strength up.

Obviously, if you’re bringing Quick and you get hit with Quick down…that’s debilitating.

Likewise, as the fight goes on, Barbatos has more opportunities to ruin your day, including:

Not to mention that raids have a timecap, so we want to be quick so we can get more swings in.

Barbatos, in this raid, has the Undead trait.

A few servants get bonus damage as part of the event, although sadly, none of them are very notable for the raids bar Kintoki.

As a Buster-inclined F2P, Mecha Eli-Chan is your best option, followed by Caster Shuten = Summer Jalter, coming down to flavor and who you have raised/the resources for.

For everyone else, Sanzang is the true MVP of these raids, if you can enable her.

call me biased, but a Lv. 100 Robin with double Waver and Tamamo and MLB Black Grail can TOTALLY take Barbatos out ~50% of the time grail your Robin everybody

NP5, Lv. 100 Golden Sumo, double Tamamo + Bradamante Sitonai comps can sometimes oneshot the boss even without her Atk buff. If her Atk buffs lands, she will always OHKO (but just barely).

Vlad will always need crits, and even then…

Nobody else comes close.

Lemme know if I missed anything! Feel free to correct my math, (which always needs doing). There are some Buster options I didn’t do calcs for (Illya, Penth) and I’m sure there are plenty of other creative ways to take out the boss, so use this as your starting point and go from there

Thanks for the details, I didn’t see this anywhere.

This is about Solomon though

Barbatos can’t exist we already killed it in Solomon

I can’t tell if this is a joke?

But anyways your efforts are always appreciated @jakeybitchette

We’re past EoR at this point in time

There are no Demon God Pillars left, How is Barbatos in Case Files?

Ahhh Barbados… I was playing in the car while driving to the in-laws for Christmas. But I just love this momento I found online shortly after Assassin huh, and this time I have sanzang and np4 circe to tag team death, probably with support merlin

I hope people put her up! Because I expect Waver/Skadi to be the majority of the Caster/All slots. Poor Sanzang

Yeah, it’s Sanzang time for me. It’s one of those times NP5 is a very nice luxury since I can run her with BG and Atlas MC for debuff clear in case she gets hit with Buster Down. Don’t even need 2x Merlin, because native Merlin + Skadi, Waver, or Reines will guarantee 1T.

Jk it’s a memorial quest-type thing. Idk the story reason behind it

We’re past EoR at this point in time

There are no Demon God Pillars left, How is Barbatos in Case Files?

There are Pillars left - some escaped, as was mentioned during Solomon and since then. As for why Barbatos is here, I’ll wait and play the event.

Just lore her S1 and bring Merlin and like, Liz lol

I’m gonna enjoy being able to grind up Atlas’s MC level, since that seems to be the hardest to level (because how often do you not use your MC?)

Do you know off hand what is better for sanzang if you don’t have BG, heavens feel at low level or AD maxed?

Case Files isn’t Case Files the same way every collab event isn’t their source material. In other words, they can do whatever the hell they like and it doesn’t have to fit any continuity.

I feel bad that Sanzang’s skills are always underleveled, but I blame her for doing the job so well without them. I think I left her at rank 8 s1, but maybe I’ll fix it for giggles.

Aerial Drive is only good for the starting NP gauge, honestly. But Sanzang doesn’t need that, so why use it?

You have your Ox Demon King CEs too

We got lots of pages and seeds that year

I’m short on pages again, but I’m still around 100 after doing that, so I feel fine.

Crud, don’t have any of these options

Throwback to us getting pages in back-to-back lottos, or something