Hi, since Castoria’s arrival in NA is very soon, I would really appreciate recommendations about which command codes would be good options for her.
I’m planning something like this:

Which cc’s will you put her?
Thanks.

Experiment. CC removal is going to be just QP by the time Castoria launches.

Can never go wrong with mage of flowers on the arts.

Could be, but I have already put that CC to one of the Astolfo saber’s quick card.

I’ve always liked Good Wife Wise Fox and Maiden of Orleans as a package deal but you don’t really want to be doing brave chains with Castoria. Other options are Hachiyou no Kagami for stun immunity, Holy Night Aurora Borealis for some stars and BB slot. Ultimately you are probably going to be looping with Castoria most of the time and if you are going to be doing challenge quest you will probably be moving CCs in and out that work best for that particular mission. I think we can freely move CCs on 5th anniversary when she drops.

wait it’s gonna cost QP to remove the cc? I thought we could change them like CEs

Information I was told was a couple mil QP to remove.

Based on this on the wiki I think you’re only paying more qp if you use the remover to reclaim an opener and then unlock another card, which takes QP. Considering how detaching or overwriting bronze CCs now doesn’t take qp, I’d be surprised if that was an added expense beyond using openers

I will give her whatever spare CCs I have, but I’ll be in no hurry.

Maybe load her up with defensive ones. Her CCs will matter not one bit for farming and only situationally for harder content, of which we will have very little for a long time.

I’m in the group that sees CCs as non necessary for supports. Unless you’re going for stall comps, then you would usually use the DPS’s cards in CQs instead. CCs in farming is almost non consequential too. Having said that, defensive/offensive support CCs really are the way to go. Attack buff, NP damage up, crit chance up etc. removal ones will do just fine. Maybe Merlin’s, Jeanne’s and Lolivinci’s CCs are some of the preferable options too. Though I’d rather use the last one for semi-offensive supports instead tbh for maximum and less situational benefit~

I’ll put the budget ones in my case. Glitter and Cure for the most part~

I forget Command Codes exist. I think I’ve used them on 3 servants? Maybe?

They’re such an after thought to me. I have no idea what the ones I have rn would do.

The wiki says it refunds the QP you spent in the first place. I don’t play JP, so I can’t confirm, but it’s pretty clear what it says here. 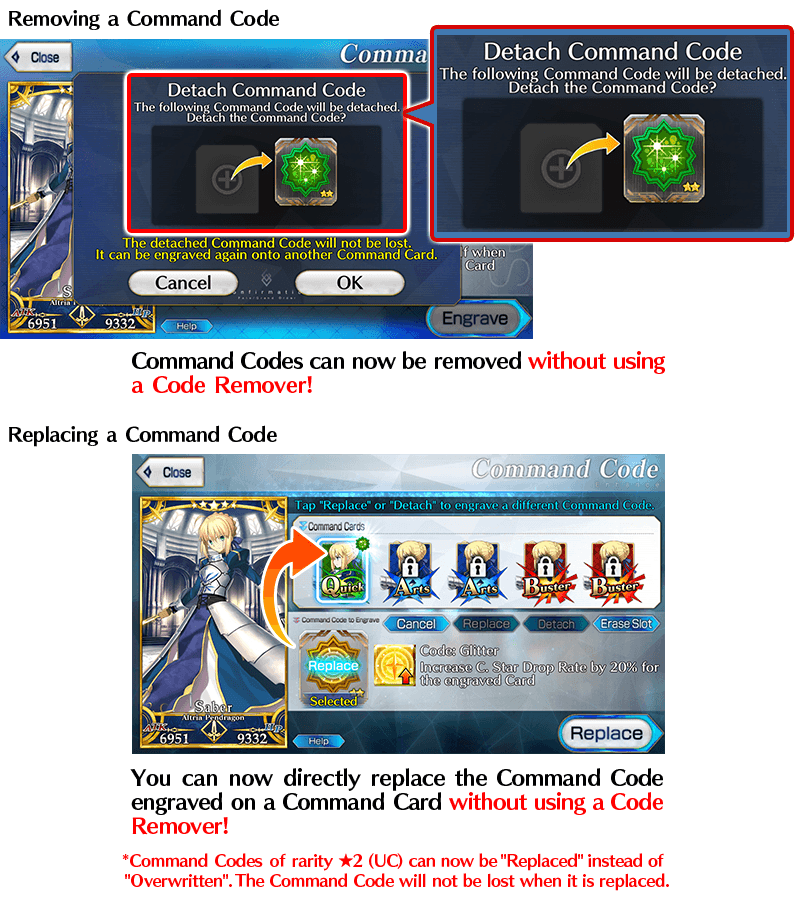 They don’t matter so much for most loopers, but for anybody who uses face cards they’re excellent if applied correctly.

Arjuna Alter without command codes is noticeably less effective than he could be. He’s obviously still strong if everything lands, but if they resist his buster down debuff you have to live knowing you accidentally borrowed the AA that doesn’t have debuffs on his command codes and you just gave away potentially hundreds of thousands of damage.

I’d rather borrow an NP2 with a few debuff command codes than an NP5 without. It’s weird to see an NP5 100 2k/2k AA without ANY command codes, but my list has at least one of them still.

As a support, the most important CCs to attach to Castoria are obviously utility codes, since you’re not generally going to use her facecards for their damage potential.
I’d throw a White Vessel’s Command Seal on one of her cards, since removing a debuff is never a bad thing, but otherwise CCs like Dark Disciple’s/Disillusioned Blossom’s Command Seals, Dove Report, or the future Blue Witch’s Command Seal, Mini Border, or Silver Key Shrine Maiden.

You can’t go wrong with the Mage of Flowers either, but obviously there’s not enough of those to go around.

On a support like Castoria you want things like maiden of orleans for healing, something Castoria lacks or utility CCs that remove buffs from enemies or debuffs on allies, which has a laundry list of CCs available for that depending on how long you’ve been playing since a lot of events have limited CCs.

What you don’t want are offensive codes like armament of victory on Castoria. Those are better suited for servants with crit capabilities or really good facecards you want to use like Ereshkigal’s arts card.

This conversation reminds me that I’m sitting on some perfectly good CCs right now, but then again, I don’t have a pressing need to shuffle.

Will just wait until the shit hits the fan around the end of the year with Douman and Muramasa arriving.

I have several that would be nice on a few servants and they’re collecting dust for now, but I can wait another 45 days to start the maneuvering.

I bought all those damn removers (from shops) and I want to get some QP and openers back on a few of these transactions.

I see no real reason to engrave entire deck unless waifu

Inb4 someone asks about CC itself

I see no real reason to engrave entire deck unless waifu

to burn some QP