Completely lost as to how to build a team

So I’ve been being torn back and forth on teambuilding in AK and I’m starting to think I’m hitting some walls because I simply don’t know what synergizes well (All I know is that I love Aak and am usually fond of buffing/bossmelter teams.) This has led to the other issue is that I don’t really know how to build next as an operator and the resource costs for mistakes has been increasing extravagantly. Offering a chunk of my roster as a reference, can anyone help me? Or even just provide insight on how you built YOUR team. Something to let me to get somewhere with a generalist team, pft.

Thank you in advance! 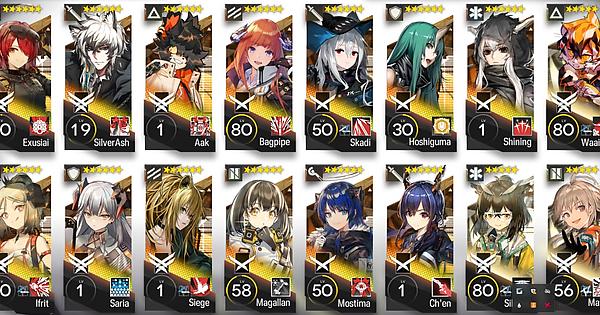 Hello!
The cost of building one operator is certainly very expensive, but I don’t think making operators you like is wrong per se. Have fun with your operator, I will boldly say

That said, however, I’ll try giving you an insight on how I build my team. Take this with a grain of salt though.

That’s from me I guess, I wish you best of luck on your teambuilding. I hope this helps!

You have most of the core operators in every type but not everyone E2.

If you still want to make this game easier I suggest you to E2 every S+ to S-(check them in tier list).

If not, you can start E2 some unique character to make game more fun and challenging.

Another choice is E2 Base operator like Texas and Lapland. They will profit you in long run.

Without seeing what the rest of your units look like I couldn’t say 100% for sure, but I would say one thing to keep in mind is that it’s much better to spread levels over your team rather than pump a few up to max. I see a few max E2s, which (while it will get more people to use your support units) is very inefficient for your exp & LMD for what you get out of it. The general advice is to get everyone in your main team to about E1:50 before getting anyone to E2, and get them to E2:40 or so before pushing anyone further than that. Once you have most of your main team to E2, Mastery levels become more important than getting more operators to E2.

As far as team building goes, I generally see this advised until you get a hang of what can be swapped out:

2 Vanguards (usually DP skill types)
2 Defenders
2 Medics (1 ST and one AoE)
2 Snipers (at least one should be anti-air, often 2 are needed)
2 Casters (1 ST and one AoE)
1 Guard
The last slot is flexible depending on the stage’s requirements and personal preference. DP-on-kill Vanguards, Guards and Defenders are pretty common.

Once you’re gotten that down, you can start toying with what’s good for changing around. Here’s my main team, for example–while only the first five are usually “set in stone”, you can see it doesn’t exactly fit that main team composition but have some decent reasons for them. So you’ll notice I don’t have 2 defenders, 2 snipers, 2 healers, or 2 casters. But I’ve found here that:

Saria is a powerful Healing defender, and her skills can swap her to be either ST or AoE healing depending on the situation. So in most cases I don’t need a second Medic, allowing another DPS to be added.
Estelle is an AoE guard, which blocks 3 at E2 just like a Defender. She can be used well on lanes that have a lot of weaker enemies, so that they die before doing enough damage that it doesn’t matter that her defense is lower than a Defender’s. On maps with a lot of stronger enemies though, I do have to swap her out with a true Defender like Hoshiguma.
I don’t have two Casters, but I have a Caster and two Supporters that deal Arts damage, which serve the same purpose. They do less damage than a true Caster, but each have separate utility that can come in handy.
I don’t have two Snipers, but frankly Eyjafjalla tends to melt anything that approaches her. As long as I have her a Blue Poison covering different areas, I usually don’t have to worry about any drones slipping by. On drone-heavy maps, I usually use an Exusiai from a friend support.

You’ll also note I do have a few maxed operators, but my entire team is at least E2:40, with the exception of Myrtle–since she usually isn’t actually hitting things and is there to print DP, her level isn’t usually that important.

My base team usually starts with Saria, Silverash, Texas, Platinum, Ch’en, Eyjafjalla and Myrrh. Depending on the stage I’ll add in or substitute. That said, here’s the operators I’ve found most useful:

My team building revolves the 6* I like. Here’s my core squad:

I then build units to complement the and supplement my team

I think it’s easier and more fun to do it this way. For one, I get to enjoy the game because I am using the units I like. Another is it gives me direction: developing units that will help my main squad. Just take one project at a time and develop a unit depending on that project.

I’m not trying to sound sarcastic, but with that lineup just in your picture, disregarding the rest of your operators, at that promotion and level, trust me when I say that you can beat absolutely every stage in the game bar none. Even the challenge EX event stages. If you’re still having difficulty it’s more about how you use your operators than who you need to raise more. You can beat even Kazimiers Major (CN’s latest event) with just 4* or lower. If you need inspiration, feel free to look up guides on Youtube or Bilibili.

As others have said, spread your resources. Arknights is a puzzle game, not an RPG. You collect puzzle pieces and prepare them so all of them are adequate when and if you need them. Don’t select a few to “build a team” and raise them until they can bulldoze everything, because they won’t (except SA, Eyja, Blaze, and Hoshi and possibly Bagpipe and Exu, because they can, in fact, bulldoze everything).

So I’ll see if I can give a little specific advice for the units you have, using the basic setup I gave before.

2 Vanguards: Siege, Myrtle. Bagpipe is also a good one, and can take the spot of either the Guard or the free slot. Zima is good to swap out for certain maps.
2 Defenders: Saria, Hoshiguma (level to around e1:50 at least)
2 Medics: Silence, Ptilopsis. Perfumer is better on some maps, but ptilopsis is better in general. Once you get used to positioning her right, Warfarin can also be great for powering up your DPS
2 Snipers: Exusiai, Blue Poison. I’d also suggest leveling Meteorite
2 Casters: Ifrit, Haze (Amiya is worth leveling for down the line, as a tip)
1 Guard: Silverash
“Free slot”: switching this around every battle is the best way to learn how you can substitute units. I don’t have her, but I hear Skadi is good as an assassin or can be sustained DPS depending on which skill, Waai Fu and Projekt Red are good for dealing with spiders and such. You can also put in operators you just like and see what situations they’re good in.

If you clicked on the link of his image, it’ll lead you to an imgur album where he posted all of his units from 6 star to 4 star. Just letting you know!

Thanks, I wasn’t paying enough attention to notice it was a link! Updated my post with more full information.

Quite a few powerhouses in there, so once you get a hang of forming your party to the mission you’re in, I imagine you could clear everything that’s in the game so far. Unless this was an account you bought, with that much invested I imagine you’ve cleared enough to be able to farm everything, so your issue is probably specific high-end maps like challenge modes and Operation Inferno? If that’s the case you’re probably better off looking at strategy guides for those maps rather than overall team building information, since those kinds of missions tend to need to be tweaked significantly from the standard.

well teambuilding really depend on the map u play like if there are lots of air units u need more sniper/caster/range-guards
is it more heavyhitters/bosses u might want units that stall fastredeploy or slow/stun/roots.

i can see that u E2 maxed some units (waaifu and silence) personally i would only E2 30/50 all my units first.
to max a unit in most cases is a waste of LMD the only exceptions (IMO) are silverdaddy as he nearly always can be used and the dmg increase due to the lvlups during skill use is huge (for every 20 lvl he gets ~33atk boost on S3M3 thats total boost of ~100atk per attack which would be [if SA would attack 1 enemy over the duration 30sec 2700dmg more and thats only 1 enemy if its 6 enemys u imagine how much dmg that is from just this little atk boost ^^]
the other exeption would be summoners like magallan and mayer because the summons also get stronger with each lvl of the operator and if we take magallan S3 as example u get up to 3 “mini-meteroite” as summons that needs to replace 1-3 units and lvling only 1 magallan to max is cheaper in total than lvling 4 units to E2 30-50.
so lvling 1 summoner to max is worth it (if u like playing with summons)

an other “exeption” to dont max units is for Aak use : some units will not survive his burst dmg unless they hit a specific lvl cap to get enough def (if u dont want also to use helerps like shinings def aura and skills) so lvl according to that.

speaking of Aak here some funny combos u can do:
units with dodge like helleguar with S2 active/ Feater and such can dodge his S2-S3 skill attacks so they dont get dmg of it [ok hellugar would also get AttackSpeed out of the dmg so even if he doenst dodge it he will hit faster]