Inching ever closer to 100%

Still want to know how you people are managing this! After swapping from Enterprise to New Detroit I went from doing ~45% to ~55%, and I am sure I can maybe go to 60-65% if I am careful with deployment (Lin got killed after only 30s on the field, whoops), but that’s still a big gap. Part of it is gear and possibly missing staple supports like Harim, but still feels like a major gap.

On the bright side(?) I decided to round my pity count to 110 and got ALSY. So now I can go in full hoard mode without being tempted by the next couple of ascended units, but I also just blew my pity counter. Hopefully Ministra won’t come for at least another couple of months, or I’ll need to rely on luck, which I am not very good at.

Still want to know how you people are managing this!

It’s pretty much everything put together. Units and gear combined.

Deploying units fast with batteries (Choi Ina, Lin Xien, and Sigma) are a must. Put tank gear on Lin Xien to help her survive. Her ideal set, if you can manage it, is CDR set with tank subs (Anti-ground/melee Res) just to make sure she survives.

Deployment order can matter too but it’s a mixed camp of opinions.

Some say bring out DPS first so they can start dealing damage and then as the buffers and debuffers come out they start to deal more damage.

Others say buffers and debuffers come out early so that DPS can deal optimal damage once they come out.

Personally I do a mix of it.

Also, remember to bring Joo Shiyoon to counter the enemy’s Specials. Those can kill the squishies on the team like healers.

I should get Ina geared up, she currently isn’t at all. Don’t have Sigma either. Xien gets deployed first, but if I don’t get healer out soon after, she doesn’t survive boss’ ultimate.

Some say bring out DPS first so they can start dealing damage and then as the buffers and debuffers come out they start to deal more damage.

So far I’ve been trying to deploy things that will survive while doing damage first until first slam, then drop all buffers/debuffers, as quite a few of them are squishy. Which leads to…

Also, remember to bring Joo Shiyoon to counter the enemy’s Specials. Those can kill the squishies on the team like healers.

AHA! That’s the ticket. Had no idea how people kept their squishies alive through the fight with mandatory slams. Had to rely on Esquede’s shield before, which is less than 100% reliable with all other AE attacks going around.

@Moop You nearly oneshot my raid, so I’ll oneshot one of yours. 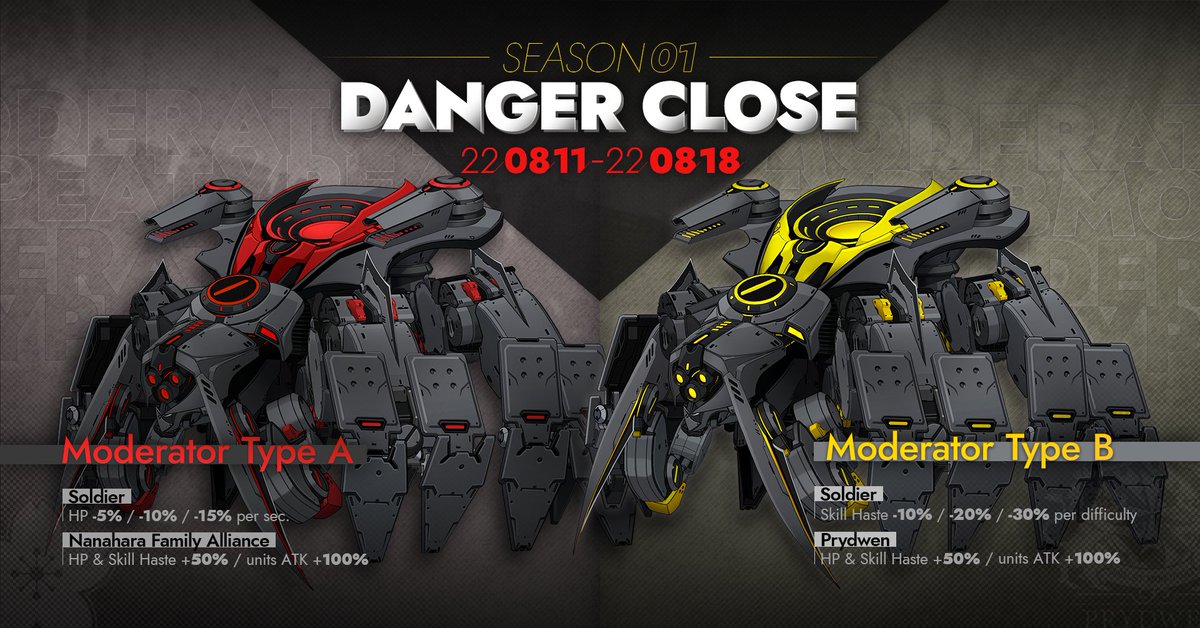 Seems to be the same as SEA server’s first season so link below shows their progression if anyone wants to plan further ahead.

I’m having massive trouble clearing challenge stage 3-9. Even my A!Hilde can’t survive till I place more units. any tips?

If you wanna know the secret… you just gotta manual it.

Use auto at the start so the first few units drop simultaneously, then go manual. Dropping your units at the midpoint of the map saves a lot of time they’d take running to the boss, so they get in more DPS in the long run.

What team are you using?

I forgot which team specifically I used for that, but I remember using Lee Yumi and A.Yuna as my leads instead of A.Hilde. Yumi’s Evade-centric stats and skills sort of work better here cause of how EVA works in the game. As long as RNG goes in favor of EVA, damage from the attack is greatly reduced. Whereas losing the RNG means they take full damage.

Hilde has lower EVA, plus she’s reliant on barriers, so more often than not she takes full damage. Even with her 5% MDL, cause there’s a ton of enemies, her HP melts quickly. Similar to why Admin Rifle is one of the counters for her in PvP.

Using Lee Yumi is reliant on RNG, but since challenge tickets aren’t consumed if the run fails, I could just restart as many times as needed until I get the run where she survives long enough.

So Lee Yumi to tank, A. Yuna for her massive AoE attacks and self-sustain, then Evelyn or Claudia (I forgot who I used first but I deployed the other one later). After that, I remember bringing Kyle for his walls, Admin Rifle to help take out the shieldman.

Can’t remember who else I brought on the run that finally cleared it. Might have been Hilde and Kim Sobin?

Thanks for the tips, I’ll try it again tmr!

I actually got this on full auto yesterday hehe

Well for what it’s worth here is my set up!

My Esterosa somehow is my highest dmg dealer at almost 14kdps in one round I see. I have no idea why.

I think you can get better results if you deploy Sobin and Xiao Lin sooner. Plus, always deploy Seo Yoon last. She gives a 30% ATK buff on deployment that only lasts for a fairly short time, so it’s best to deploy her when everyone else is out. Plus Specials come fully charged on deployment, so she’ll use her Special when she gets in range, which provides another DEF debuff on the boss.

Take out Assault Trooper and Ingrid, and put in Eddie, if you have him, and Cathy Wade for additional buffs.

Now this does put a smile on my face

I’ll do that for my next raid and show the results!
I don’t have eddie, but I can make Cathy Wade stronger. Guess I’ll do that

Just farm Eddie’s shards in Orca’s sidestory. He’s an SR so it won’t take as long. Plus he buffs both soldiers and counters, so he pairs well with the admin rifle and admin swords you have.

AH HE’S FARMABLE? ON MY WAY

Also, can the game please stop sending me mail about how my defences has lost for the 123971823 time. Thank you.

I looked at your setup and dps (14k!) and came to conclusion that

Even with Joo Shiyoon I lost 4 or 5 units at 80% during slam. My highest dps is A.Mina at 10k, with second highest being at Xiao Lin at 8k followed by Alex(?) at 5k. I run out of time at about the same time I deploy my last unit, so I need cooldown reduction on Ina and Xien really badly.

On an unrelated note, I am really annoyed that game uses T4 Spectral items as fodder on “auto”. It only took one day with lack of sleep and too much clicking to lose 10 pieces, some of which were actually useful.