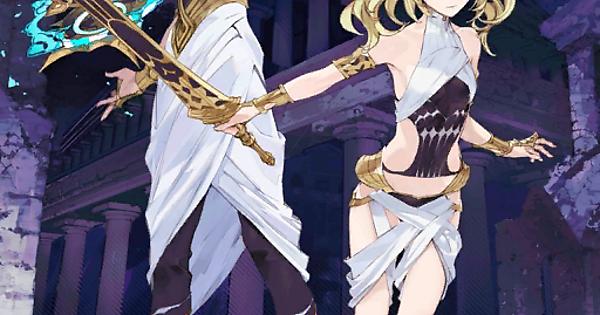 Information from Appmedia and Kazemai. Will edit again once numbers come out.
Stats:
Lv 90: HP 14824, ATK 11840
3rd highest HP out of Sabers, tied with Nero Bride. 6th highest ATK out of Sabers

0.51% per hit seems little, but 4 hits on 2 Arts cards, 5 on Extra and Quick, complete with Riding and Self Replenishment. Seems a little too good to be true, imo.

Based on some footage it look like that first skill at max rank give 10%NP gauge when using Quick Cards and 10 Crit Stars when using Arts Cards. Dioscuri’s np gain is crazy good like what the hell

And if I read it correctly, " 恒常サーヴァント" means that Dioscuri is non-limited.

With Google Translate being what it is, I double checked by searching the word itself, and I got a whole list of Servants who fall under the 恒常サーヴァント category as well The very first new non-limited non-story-locked 5* Saber since… what, Mordred?

I’m too scared to do the exact math behind their np gain because I can already tell that’s its really good and I am going to get irrationally angry at how unnecessarily good it is.

Credits to xNaya. Just the first 30 seconds will show you how good Dioscuri’s NP gain is.

I bet Yuuma-chan had a great time having Maaya-chan call him Nii-sama.

this my friend is what u call
balanced

Will edit again once numbers come out.

Not sure if they are correct, but the FGO wiki has the numbers out.

If you have subscribed to ka ga’s channel on yt, you would see that he uploaded a new video on Dioscuri. The loop potential is definitely there, even if it WAS a solo.

I know that is a mostrously good just reading this,but now thanks to you i know that is even more broken,nice

I’m too scared to do the exact math behind their np gain because I can already tell that’s its really good and I am going to get irrationally angry at how unnecessarily good it is.

The only justification I can think of is because Bride exists. Bride has above-average base NP gain (actually higher than her parameters should give according to DW’s little formula), and on top of that she has 3T NP gain buff and 30% battery. So they give Dioscuri all these fancy gimmicks on top of her unusually good NP gain.

Oh well, if only DW gives this kind of thought when designing other some other ST Arts servants.

Overall, just as a damage-dealer I still consider Bride a step above but Dioscuri is very competitive.

They pack a 1.581 combined damage mod at base that can pushed further to 1.85. Not so bad.
Very good internals considering their deck and +6% passive NP charge per turn and their 1st and 3rd skills: their buster card is really his only dead card => Easy looping is pretty much sure.
Pierce Invuln + Def ignore mean that you won’t have to bring a dedicated flex for dealing with the most common gimmick in CQ.
IMO, the only thing that hampers them is their lack of on demand battery that prevent them from initiating their NP loop turn 1 with BG + double Tamamo comps.

Once their data is added to the Command Chain Calculator, I’ll really need to play around and see how their first skill interacts with their np gain and star gen. I’m also curious to see how they would interact with Skadi.

Okay, when I first saw them I thought they were a 4 star with cool animations I could potentially get easily, but apparently they’re a 5 star that’s crazy powerful. Well, at least not story-locked so perhaps.

I could understand Caenis being sort of a Lancer/Berserker passive-wise since we already have Saber Gilles, but Dioscuri is a Saber/Berserker/Avenger as far as passives go? Would it really hurt them to make multiple servant versions rather than lumping three classes together?

Guardians of Navigation B

I see they don’t mind buffing Voyager of the Storm, and don’t have it cancelling out the Rider passive, so clearly they need to go back and add the rider passive to Blackbeard and Drake.

Dioscuri is a Saber/Berserker/Avenger as far as passives go? Would it really hurt them to make multiple servant versions rather than lumping three classes together?

It’s because of the way they’d function in a typical grail war. Although they’re technically one servant, they individually have different classes: Castor with Avenger and Pollux with Saber.

Gosh dammit! I keep misreading the threat topic as “Daishouri” and always wonder “What the heck did Okita do now?”