The year is 2020 AD.
All of Chaldea is entirely occupied by the devoted fanbases of Okita and Musashi
Well, not entirely…
One small community of indomitable Romans still holds out against the invaders. 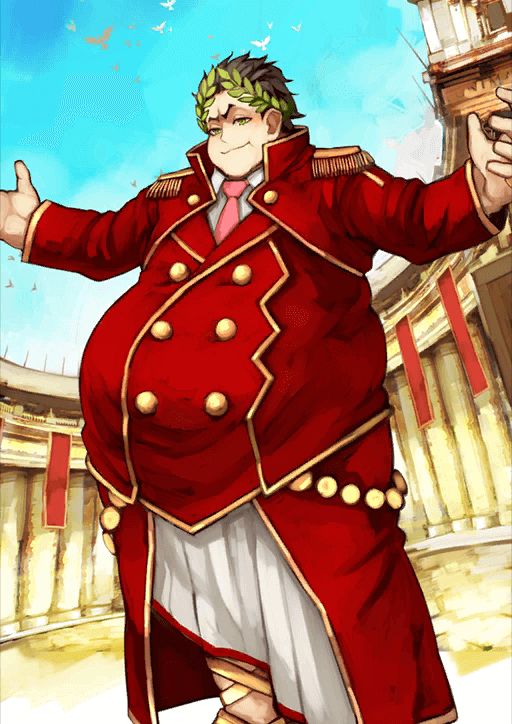 Boy, there is such a thing as buffing, and then there is buffing, you know. Seriously this upgrade was just silly. The sheer damage his NP does, is crazy, and you can actually set up successive NPs with double Skadi and the Combat Uniform.

But that’s in 2 years. Until then he’s Bedivere’s rival. Bedivere and his magic poti—wait. Wrong side of the channel.

Just for reference, I believe at NP5, maxed skills and all 5 Attack Ups (not hard to do) - he hits just shy of Musasahi…NP5. It’s disgusting.

It’s an actually obscene buff, and I love it. He’s already a more-than-capable generic damage amp for virtually anyone, especially with his bond CE or a Carp for added insurance, and IMO, tends to get relatively underrated just because his kit is ‘vanilla’ when that nonsensically ignores his star-bomb-via NP and, well, effective multiplicative buff-stacking. He’s put in good work in my low-rarity runs, but then he’ll become a remarkably excellent DPS as well in his own right, rather than simply “Well he can buff, and also do damage.”

I low-key have this conspiracy theory of an Okita buff in light of it, and one I think isn’t just rooted in intense character favoritism plus wanting another Okita banner. I think it might sound silly, but I also think there’re genuinely more nonsensical hopes/speculations/who cares I could have instead.

Of course, even post-buff I expect Bedivere to see more general use given his hitting like a truck (and hitting obscenely at NP2+ for his rarity), in tandem with his ever-valuable 30% battery, but regardless both are quite excellent and Caesar will become amazing so I’m quite down with it.

The NP Upgrade alone boosted him to 55k damage, the rest is that crazy +50% Attack.

DW trolling everyone who rolled for Saber Astolfo

Sure, absolutely, but you don’t always need those silly numbers for casual farming is the idea, which is where I was coming from with the general use remark. Even right now it’s pretty easy to make 3 free slot 3~5T comps without bringing out my shiny golds for FQ farm (or a minimal amount anyway), which I save for the heavier farming periods or whatnot. That, I see as just getting easier overall, even outside of DSS.

Plus, I could just scope a Caesar up and enjoy those numbers, but I won’t assume everyone else can.

True, Caesar is a case of “okay, but when do I need all that damage without survival/fall backs/etc.”

He will gain a monstruos NP,but he will(usually) live to tell the tail

I knew his NP buff was good, but I didn’t know it was that good of a buff. Guess he deserves his place in my future grails list even more than he did already.

I love how out of all saber servants this fat f.ck gets this buff.
Already love his concept and character before because of events but now i wanna raise him bond 10

If all you need is damage, he’s got it. I do stand by there being very real diminishing returns for standard farming, especially since he’d be needing SkaSka or Skadi/Waver / he lacks charge in the first place… but, if you want to DPS with him instead of buff-bot like I do with him a substantial amount of the time, there you go!

Well, it is nice that he can take on several roles depending on how you want to use him, but one of my several reasons for grailing him eventually is his damage output, so it’s nice to know he’s even more powerful. Still hoping for a Tactics buff at some point since those have been getting buffed recently, but he’s quite good already. How long has it been since that last set of Strengthening quests in JP? Feels like it’s been quite a while.

Honestly I haven’t read this thread, I’m just posting to air my delight with the Asterix reference. Thank you so very much.

How long has it been since that last set of Strengthening quests in JP? Feels like it’s been quite a while.

Since the buff of Gawain

Honestly I already considered him dece as you know, if needing a little more oomph… so this blew me out of the water, lol.

Last proper RUQ campaign was 8/4/19, although do note we’ve had buffs scattered throughout thereafter: Tesla/Ishtar/Clay with Interlude Campaign 10, MHX’s final and fourth with SW 2, Napo/Ivan/Tomoe with Interlude 11, XY with Interlude 12 (finally).

Still, not frequently enough, and far too long ago, I absolutely agree.

The trouble with just having them spread around is that they typically are just for characters linked to the story/event in some way, so characters that don’t show up as much but are in great need of an update don’t get a chance at one. As much as getting a skill update alongside an animation update when the character plays a significant part in the story is nice, I’d much rather get the strengthenings sooner since animation updates take them so long. Especially for characters that are already mediocre in NA and are waiting at least 2 years already since they haven’t been buffed in JP yet.

I’m right there with you on every part of that, tbh. Alas, DW gonna DW.

To be honest this buff is not needed and is totally overkill (like seriously throwing game balance in a whack, in a really bad way). A 3 star should have no business hitting damage on par with a NP5 SSR, much less a 3 star who was already really good before the buffs and already had clearly defined roles as a buffer.

Caesar’s attack buff is chance-based but it isn’t hard to land them all considering how absurdly high the base chance already is. He just need to take a little damage…or get Calamity Jane by his side if you want to guarantee they all land. Ceasar craps out so much stars with 2xSkadi (who doesn’t?) he will also easily get every single buff out of Jane’s funny third skill as a bonus.

Although the JP CBC 2020 CQ was kind of a joke, it still says something when within mere hours of its release there were already several L70 Caesar 3Ts on youtube and bilibili (aka Caesar is absurdly braindeadly powerful now).

Welp, not the first time I got triggered by DW’s inane balancing decisions.