The CE drop to get:

The map with drops and rates: 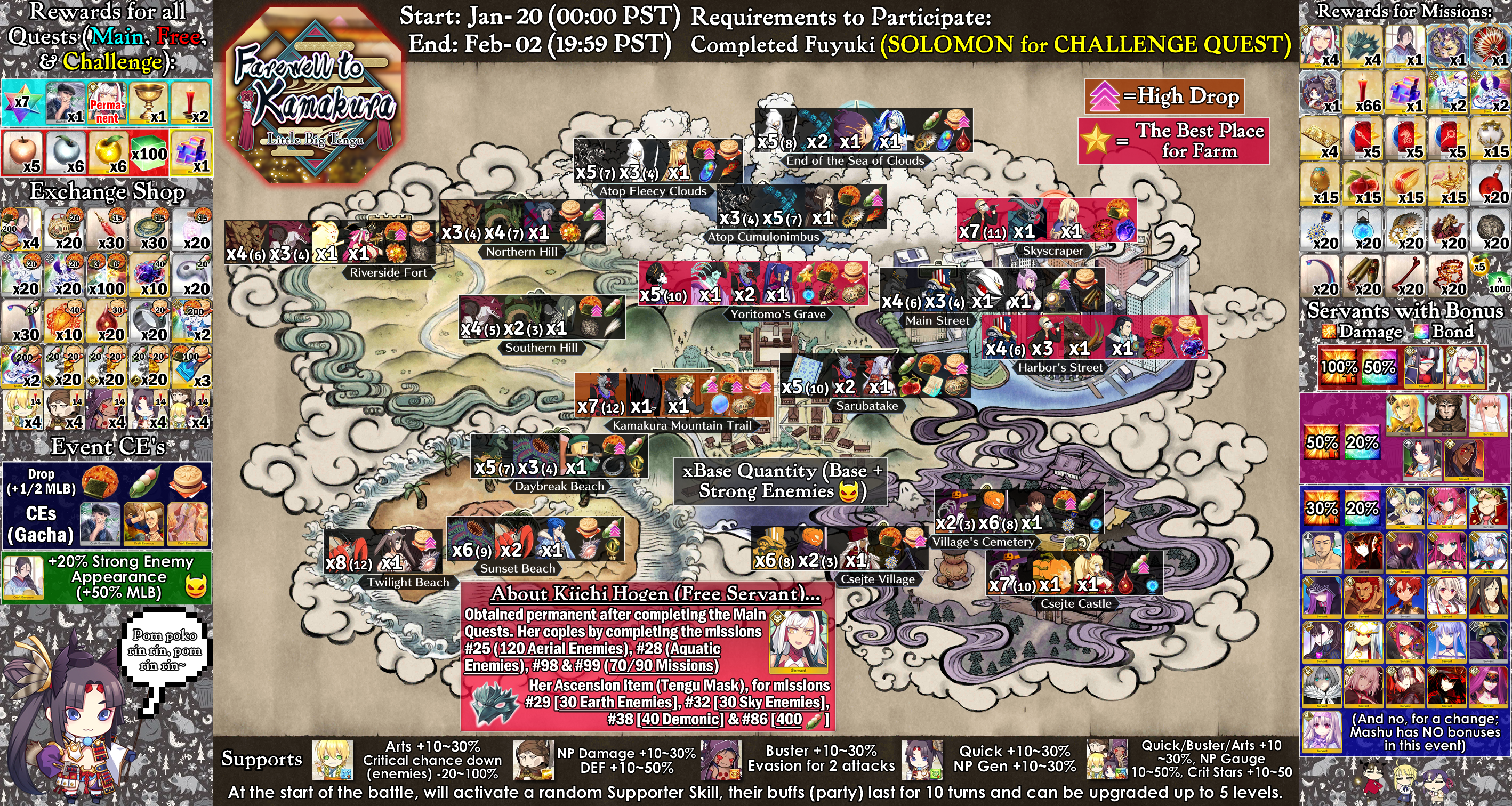 Hello everyone, it’s that time of the year again. You know what I’m talking about. It’s time for Hallowe- Wait, it’s not Octoberfest either, right? Hmmm… something in wrong in Chaldeaville. A certain little big tengu is hitting people with a hammer and have created a mishmash singularity of different events. The servants are weird, the singularity is weird. We have to solve this and fast. The only way we can do that is by HUNTING GENJI AND KILLING GENJI!.. ehem…I mean by following the trails of a certain tengu by using our own tiny tengu radar.

This is a discussion thread for people to discuss about the event. This is not the CQ thread nor the Banner thread. So try to keep the conversation about the event and play nice.

As usual, if another thread exist for the same purpose, contact me and I’ll kill this thread.

12 Likes
Little Big Tengu Rolls to see entire Genji clan DESTROYED by FACTS and LOGIC and SWORDS. Don't forget to SMASH that like button and subscribe to KILL THE GENJI
Inflection January 21, 2023, 6:38pm #2

As usual, if another thread exist for the same purpose, contact me and I’ll kill this thread.

Yours is better than mine so I’m moving in here. Where’s the pantry?

Noticed that event missions were being completed by nodes outside the event; I can’t recall that ever happening before, although it might have just slipped my mind.

I wasn’t expecting this event to be so funny, and I love that we finally have an event where Medb isn’t a turbo-brat for once.

Yours is better than mine so I’m moving in here. Where’s the pantry?

Ya, I saw that when I did the quest for the CE today but forgot all about mentioning it. It’s a bug but they haven’t found out yet.

I was absolutely shocked to hear Mash claim that Medb is universally liked by the women in Chaldea. That sure didn’t seem to be our allies’ opinion back in Luluhawa. She always struck me as Queen Bitch Supreme. The only time I ever saw her doing anything nice was trying to be friendly to Skadi in Enma-Tei. Maybe she just has Mash fooled or something.

Still, I agree. She’s always been the very few servants I didn’t want to roll because of her personality. I think the change started with Enma-tai and Las Vegas, and now FGO is trying to change her whole image. Maybe that’s the reason she pops up later on and get attached fairy something trait.

I was mad my only options were to say medb is either cool or pretty. Hate her guts and I’m often tempted to skip any scenes with medb in them.

On a brighter note:

Omnibus Halloween was well advertised I see. Leading up to that i wanted to smack mash for repeatedly lying about how there’s no way liz was around. She had three versions as event servants and is the only one who uses pumpkins to that extreme. Of course Liz was around!

I couldn’t find the recommended supporter/CE placements anywhere. If someone has it, please post it so others can put the supports and CEs as it is recommended

You mean this one? As the only “bonus” for servants is damage bonus, any support caster will do.

Of course Liz was around!

Still waiting when we will get JP Lizzy as a free servant or give us a costume of Elisabeth JAPAN!

@T1ish
Thanks for the thread

Should just make it a costume. Already had two great opportunities with oniland and this event. I might actually start using liz again with that costume. I really don’t like pink so the purple and black is a very nice change

Got really bad luck on gacha, but for event, Main already had 2 CE drops (guess that’s where my luck went).

Thanks for finding it. I added it to the top post. I’ve done my good deed for this month.

Still waiting when we will get JP Lizzy as a free servant or give us a costume of Elisabeth JAPAN!

Didn’t Liz tell us in this event that it was her costume? So it should be a spiritron dress according to that logic. Although I would’ve loved to get Elisabeth JAPAN as a servant. She was the only one who could sing.

That’s why we have those mini supports that give 10-turn buffs.

Except they are unreliable. Since I mainly use Arts looping, I can’t rely on Mini-Jason showing up when I want him to.

I’m also Arts looping so that’s why Cu will be the last one I’ll level up.

I don’t want more enemies! Get rid of these!

More enemies mean more drops for more currency and more enemy types defeated per ap than without, so using the spawn CEs is more efficient use of ap, but it absolutely doesn’t allow for 3T farming as it forces multiple turns per wave. But I 3T clear most of the time, so the occasional event with extra spawns and more facecards is just a change of pace where self sufficient crit servants get to shine instead. But if you don’t mind the extra runs from not using the spawn CEs then enjoy your loops!

I was mad my only options were to say medb is either cool or pretty. Hate her guts and I’m often tempted to skip any scenes with medb in them.

Hard agree. Faced with those two choices I very nearly skipped rather than choose one (I chose “pretty” since you can be physically attractive and still overall unattractive due to how horrible you are), and I on the other hand never skip story, it’s my favorite part of FGO.

For God’s sake, her Noble Phantasm is a literal rapemobile. GTFO with any sympathy for Queen Medb of Connacht.

Nice event so far and Hogen is cool but…

I don’t hate Medb since it would be hypocritical of me to hate her when I like plenty of asshole characters, but I picked “cool” because I didn’t want to pay Medb her favorite compliment.

Ikr, the events of the lostbelts, easy stuff. Halloween, we turn into the hamster ptsd meme.

I’m not on board with hate for Medb.

Personally I think she’s great and I’ll be using the SSR ticket on her, can’t wait tbh.

In her defence, yeah she can be a bit… let’s say villainous but there are plenty of other Servants who are similar, but because she uses her sexuality a bit, she’s deemed ‘a bitch’ or some other sexist nonsense.

Why would she be unpopular? I’d rather be friends with Medb who is at least honest rather than some others I could name in Chaldea who would likely stab you in the back if it benefitted them.

As for rape mobile, just lol. Do we actually believe that’s what happening in there? If that’s true, then maybe I shouldn’t really say what I’m actually thinking but that NP doesn’t last anywhere near long enough for that. I always assumed it was similar to Squirrel Girl, we don’t know what’s happening, but Medb wins.