This time we face off against Saber Diarmuid and Assassin Emiya. It’s a relatively easy CQ, but here’s gamepress guide with all the gimmicks:

All the best fellow masters, may you and your servants reign triumphant and most importantly get that lore

I’m thinking of this here, once I’ve cruised through remaining missions on natural AP - Borrowed el-Melloi, charge Queenie up and bring in Flora in the back to catch Kiritsugu’s nuke plus crits the pretty Irishman may produce. In comes foxy to charge Queenie back to full and hopefully remove Kiritsugu from the premises, Irishman should be easy going after.

It’s easy CQ for sure.
Euryale can handle Diarmurd.
Also these 2 guys use ST NP so it doesn’t hurt.
But I have to clear all main quest before do it. 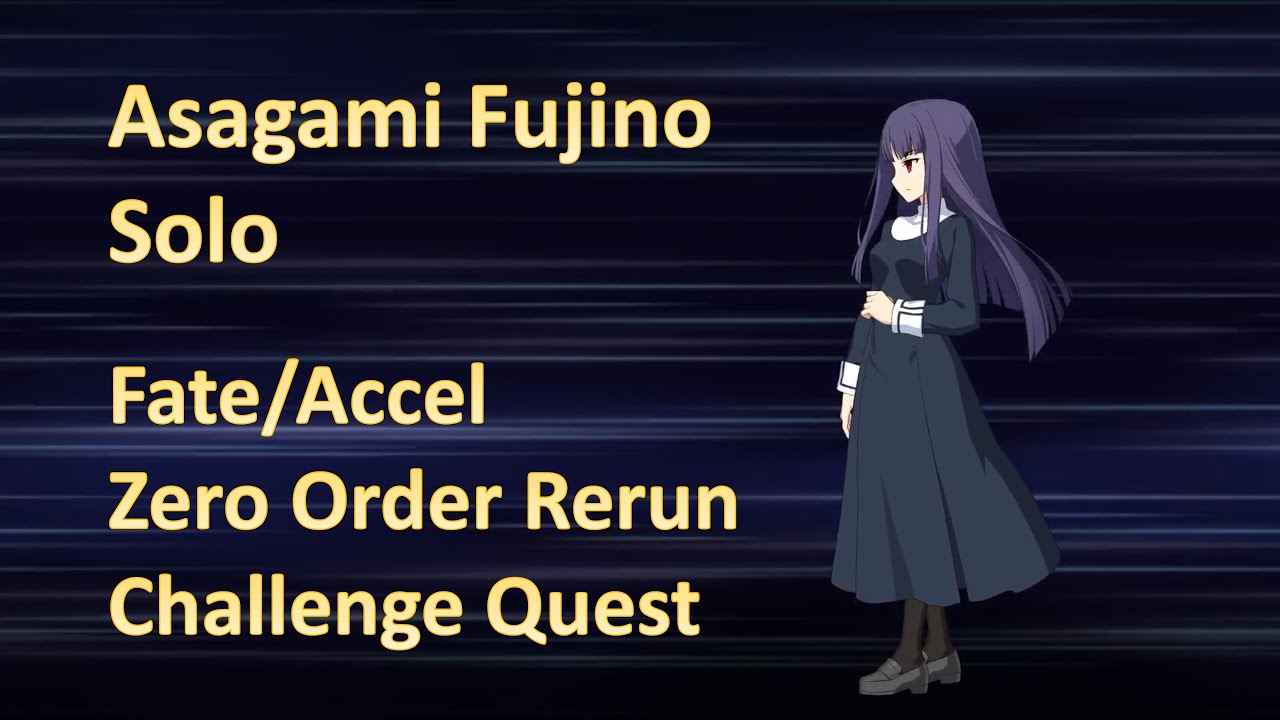 That’s why I will try some different setups, I’ll probably go with Jeanne’s boyfriend and my own newly pulled waver.

Here’s the team I used for my 2nd clear. After dropping buffs on Jalter, swapped Waver for Mash. Poor Merlin, the AI hated him. He always got hit before Jalter, who always had the evade up when she gets hit Mine is level 90 NP2 so i’m not sure if i’ll be able to do it but that looks life fun, once i’ve finished up the missions with natural APs i’ll try that. Friend Waver, as usual, dies turn 3 due to crits.

Kerry had a damn hard-on for Orion, attacked them all the time.

Once Waver died, it devolved into arts stall with no Prisma on Tamamo, but hey I won. I feel a little guilty trivializing almost all CQs but oh well.
Its really alot of time saved… 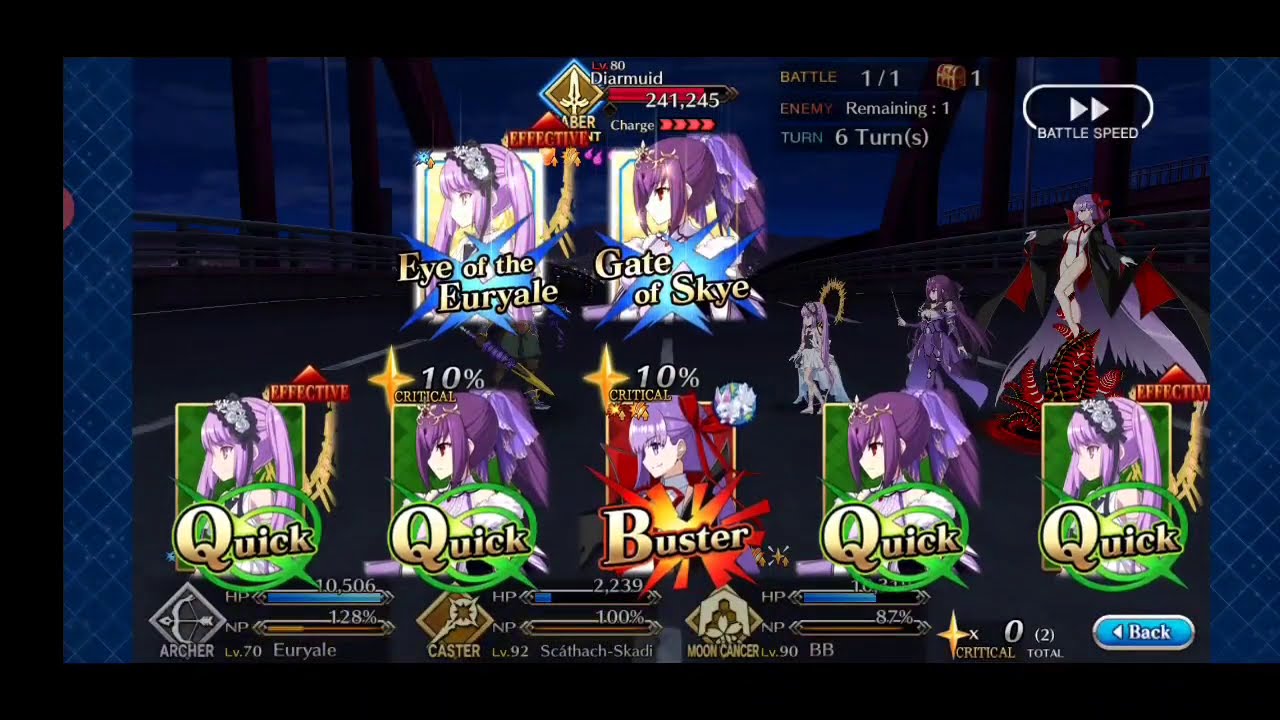 For my first try, I just Skadi meme’d this CQ with Dantes.

I gotta say I’m very impressed with the results.

Oooh, a CQ where they try to cheat with enemy np spamming? I know what to do with that EMIYA never got off a single np, waver’s stun or Edison’s seal were always there and he fell quickly.

Diarmuid post break was a bit tricky with that debuff cleanse and crit buff, nearly lost waver and Tama. But again, we shut him down. No np’s for him either, though I did have to resort to the MC stun once to prevent him until I could cycle np’s and skills through to drain him back to nothing.

It feels nice to get by a CQ without needing command spells for once. Here is my setup and result.

I know this is one of the easier CQs but I am still quite satisfied. How were you able to replenish his np gauge at 100% in just one turn after his np ?

Too often I forget how great is our goddess Euryale

This took a few more turns than I was expectring, Sanzang did really well with Emiya, but didn’t want to die

Some unlucky cards in the middle but I liked it, nice CQ

So I decided to try again with a different type of stall and picked merlin, BB, Jeanne. And I thought I would focus on Kerry first because he’s got a short bar and pierce invincible skill. Should be easy, right?

Yeah, got Kerry down to half of his last bar, and he proceeded to use scapegoat on diarmuid EVERY SINGLE TURN UNTIL DIARMUID WAS DEAD!!! so it was impossible to stun him to sync np’s or just make sure he didn’t np with pierce active (fortunately only targeted merlin like that, who only ever took a half bar of damage).

But we prevailed anyway, and BB had a big syringe ready to teach Kerry a lesson as soon as scapegoat couldn’t save him anymore. Surprisingly, Kerry didn’t use his second or third skill at all.

Damn, 36 turns ? Although the additional healing from Merlin probably made a bit more comfortable than my run.

So I started this whole CQ thing by blowing my command spells on Darius, because at some point I started to think it was the real thing… Cleared it with my usual “CS revive with an almost dead enemy because NOT AGAIN!” fail-strat. Only to be greeted with a new quest stating “High difficulty”. That was off to a great start.
Brief look at the enemy line-up and vague description of their special actions (wasn’t even sure if I should expect two NPs on turn 1 from the kiritsugu starting charge. When in doubt: Luminosité Éternelle!)

So armed with the knowledge of “Assassin and Saber”, I built a well-thought an improvised team, even picking a random support Raikou by an absolute lack of inspiration (or common sense. I have no idea how you play Raikou and that showed: she simply died. More fuel for my general biased hatred against berserkers; this is a screen taken afterwards, Raikou’s skills/CE might have been different, doesn’t matter much though…)

The perfect opponents for Twin Helenaaaaas!!

Threw in the random Raikou, A BG Medea for the expected grandiose Kiritsugu frag and Mash because COST! (I think that was the reason

)
(yes, that’s a scope Mash because … reasons that probably made sense in a not entirely sober brain)

Both Helena NPs took a bunch of HP off the two until ArcHelena died, making me suddenly realise that someone has pierce invu. Great. Enter Raikou who won’t do much else than get destroyed by a crit or two while Helenaaaaa!! goes down to under 2k HP and gets order changed out for Mash (or something along those lines)
Let’s just say that I had at some point a massive stack of defense that led to a Chronos Rose hitting Helenaaaaa!! for a whooping… 37 Dmg!
Helenaaaaa!! eventually dies. Medea enters and gets deathed by DIarmuid before I even knifed anyone once, because of course he proc’ed at least once and I was keeping her battery available (or Kiri had used scapegoat).

At that point, Kiritsugu still has something like 180k HP and Diarmuid isn’t even broken yet. Nothing much for the insane DPS duo that is Jeanne and an already half-dead OGMash, at around 20 turns so far.
Mash will barely cling to life following awesome lucky combinations of NPs, taunt, DMG cuts and stuns. At some point, she was even starting to heal back up a bit. That went on for another something like 20 turns.
She would die a couple turns before the end, possibly on purpose to favour Jeanne’s chains.