No video because I still have to figure that out. Here’s my team, though (used a level 100 Tamamo with Prisma Cosmos as my borrowed support since my own Tamamo isn’t ready for showtime yet):

It was a messy clear for me, unfortunately; I lasted twenty-three turns before having to use my command spells on turn twenty-five because I made a few mistakes. If I had an extra damage CE I might’ve put it on Heracles, but he did help with the spirits Erice summoned, at least.

Twenty-eight turns total because I had to get rid of a spirit before finishing Erice off. I’m grateful I had the damage CE MLBed. I was luckier than usual and got three drops, so I was able to MLB it without the two gold currency shop CEs, which I still need to farm currency to get.

I got no screenshot or anything. I just brute forced it with a CS revive cause I’m done and never got a fucking CE drop. This cq (and by extension event) can rot in hell. Make a CQ that really incentivizes having a mlb dmg ce but only sell 4 copies and leave the last one to rng is such bull. It was so bad I legitimately had no one on my FL with a mlb ce either and I wasn’t gonna delete someone just to make space to ask for one

Was there really no one you could remove, even temporarily? Most players I know have a few inactives on their friend lists.

As for me, I typically try to save a few slots for players who may need an event MLB CE, etc.

Nope. Everyone on my list was within 3 days and I don’t know who was who off the top of my head. Even if I was willing my point still stands I think being at the mercy of a CE drop is stupid. Either way it’s done and I can ignore this event until it’s rerun that still hasn’t happened on jp (I wouldn’t mind if it never reran. I think it’s shit)

Well, if this was your first time being at the mercy of a CE drop, then I suppose you’ll have to get used to it, because this isn’t the only event that has had a damage CE requiring a drop to MLB it.

Those other events typically don’t have a cq that makes a dmg ce near required for its gimmick. At least to me it didn’t. And I’ve done plenty of events with this same situation and was fine. First run of the last guda event is an example, was fine the first run and the second run was piss easy cause I had the dmg ce that time

Edison didn’t need the damage CE. Took 62 turns but he beat her in the end

(I never got a drop yet either, still think that’s lousy. Could have easily made a 5th one a mission reward)

I can’t even unlock the damn CQ cause I have no clue what squares I still need to land on and I have no dice. Fuck this event.

The inner side of each square has an indicator of how many times you still need to land on that square (should be yellow). Once it is cleared it will look like this:

Make a CQ that really incentivizes having a mlb dmg ce but only sell 4 copies and leave the last one to rng is such bull.

rng had it’s way with me, now I’m eagerly awaiting the next event.

Wait, you used that many apples this event fishing for an mlb CE and never got a drop?

me still having half the board to go:

Wait, you used that many apples this event fishing for an mlb CE and never got a drop?

Yes. Imagine how many it’ll be if I actually get the CE and get handed poor hands consistently

Shop has been cleared out for a while so I’m just earning bond I guess. I started with Li at 220k , I wonder how close he will be to Bond 9 by the time I’m done.

Also this is without any event CE’s except what is borrowed from a friend. I didn’t roll and I don’t automate either.

On another note. The CQ can be done without the event CE but I do not own Skadi or Versus so my options are nearly nonexistent atm

I put up the MLB CE on Dioscuri for any of my friends who want it. They work very well here even if not aiming for min-turn.

Also apparently Caeser DSS with some esport supports can completely overpower her damage resistance. 2CS and it’s a guarantee 3t Business as usual for Musashi

Nothing fancy, just former master and servant duking it out. Friend Skadi had Caldea Tea Time because I couldn’t find another one. 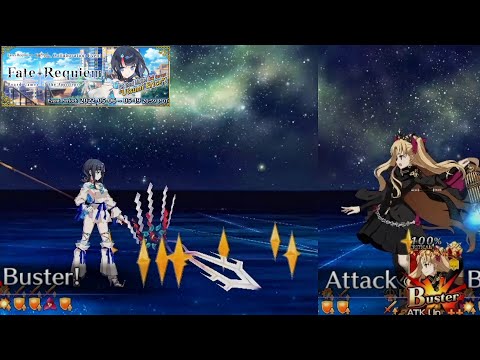