Official thread to post videos, discussions on the exhibition quests.

I hope I can do it with my np2 enkidu too, but I don’t know if I should try solo or full team, I’m not good at soloing and those crits hit hard on disadvantage cass in the videos… Maybe I’ll fill up with taunters, time PG avicebron for np protection?
Also have grailed cu to try.

I’ll try a team first since the Lancer Raikou + Enkidu combo has already gotten me through a lot of strong Archer bosses.

Solos can be fun but we don’t have thinks like Maid in Orleans or White Vessel yet so Enkidu’s solo potential while good, isn’t gonna be perfected for a while.

I’m ready to get destroyed by all the CQ’s but I must persevere for the tickets.

If you think these are bad, you’re not gonna like Saber Wars 2’s Dark Rounds.

Unlike NeroFest, I hope to participate this time around. With Skadi on my side, I should be more than ready!

Hopefully, I won’t regret insta-MLB’ing all 5 Powermod CEs I own… Not much to say, a bit annoying but that’s about it.

First time solo’ing with Lv 90 NP1 Clay 6/6/6 with Atlas. Got a bit iffy towards the end but a kill is a kill, especially when it only took one attempt. Going to keep Clay on my event support in case anyone needs some Clay love 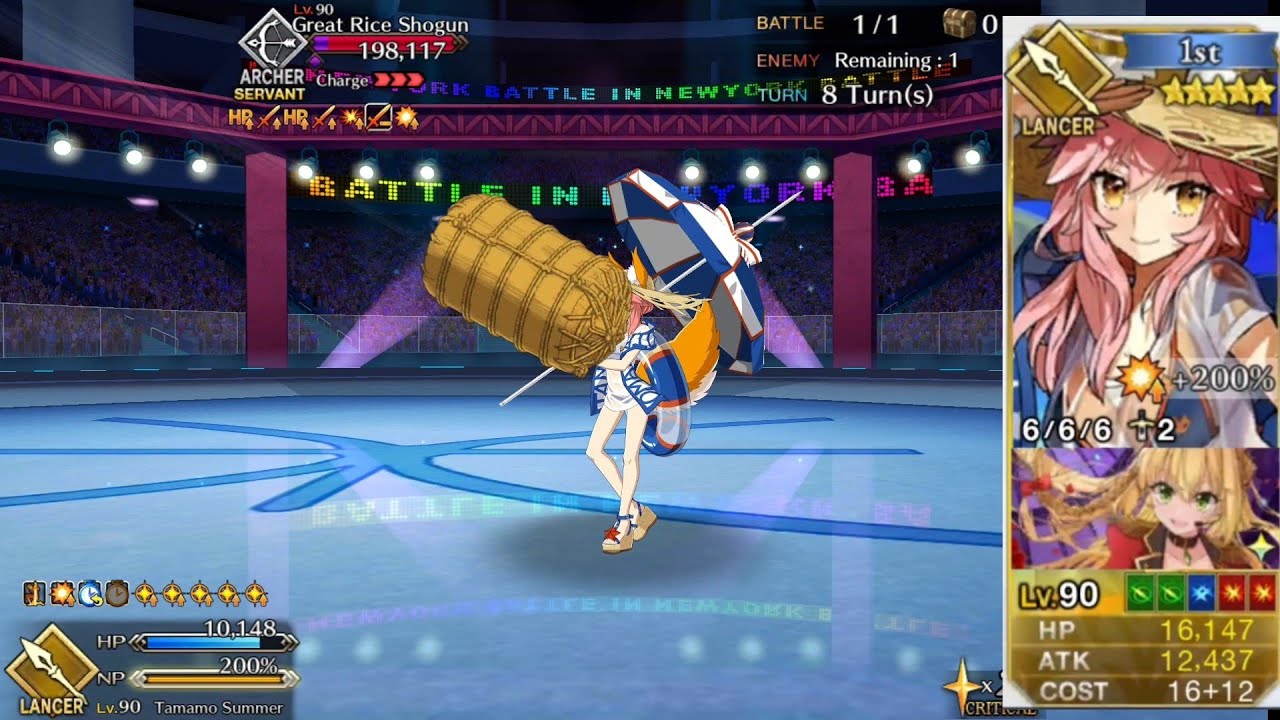 Borrowed a tamashark and beat it with her, Medusa, and Clay This was a very easy solo. I didn’t even pay attention to what debuffs he was hitting me with:

Is this the thread for the Exhibition quests too? Let’s say it is.

Both Casters died to his NP on t3 or 4 or whatever, but Bryn pretty much had it in the bag. A nice easy start to the quests here.

I’ve just falled to sleep at 20th turn. My team got card lock over and over again. Suddenly Cú Chulain pured himself and released 3M dmg Gael Bulg and finished this quest. Lol.

didn’t have any ally with a ST lancer with the actual dps CE, so i did it with someone’s eresh.

what a thoroughly un-fun fight. So many darn rules and things happening i was just completely turned off. Far easier to just pray he doesn’t arbitrarily kill someone cuz of some rule and wait til the game tells you “you can win now.”

Fun seeing herc do a 5 million NP, I guess.

Borrowed a friend’s Tama Lancer and solo’d it. Not that bad. Tama had MLB damage ce tho.
Took me 13 turns.
I brought Bunyan and Banana Oni as fodder with Obsession CE and the Jeanne D’Arc on death CE.
(sorry I cant recall the name, too tired lol)

in the exhibitions, i believe every one of them is like that so there’s no double merlin/skadi memes. plus they’re only 1 ap cost.

Fuuuuun. Make it so someone can only have one course of action per turn in a strategy game. Peak game design. Players are too attached to their servants nowadays. Let’s make it so they can’t use any of their cards for three turns.

Went in blind with Enkidu/Waver/Merlin team, I just wanted to check what I was up against and prepare an appropriate team later.

Well, in the end best clay just refused to die. They facetanked an NP at one point, did crazy amounts of damage and were surely whittling the enemy down. In the end it was just them and

on the field, enemy had his NP ready and dodge was on cooldown, I was sure this was going to be it…

I’ll also try soloing this fight at some point, looks like it could be fun!

EDIT: Solo done, it was fun!

And easier than going with a full party!