So I’ve been thinking about something today. The identity of the remaining Grand Servants, especially Grand Saber.
Grand Servants is a pretty cool thing. Like badass people that are specific chosen to fight the Beasts. But the thing is, they act waaaayyyy too different from their respective classes. Like King Hassan for example, he’s supposed to be Grand Asssasin right? But he’s walking around like a freaking fortress! Heavy armor, big sword and shield. Totally un-assasin like at all! He’s like a tank! If King Hassan play DS will his build be a strength build? ? ?
Orion is supposed to be a really good marksman right? Like his gf is a Goddess of the Hunt! She swore an oath of chastity too but for her to have fallen for him that much, he must really be good! But he doesn’t even uses range much! He prefer to smash with his fists and bow! Like the amount of muscles he have will make most other servants cries! ! ! If he’s isn’t a Grand Archer I’d had thought he’s Grand Smasher ahahahh
Romulus=Quirinus is another example. Where tf is his lance? HE S THE LANCE! ! omg have you seen his armor? Straight from Saint Seiya!! ! His blue tunic look so cool! And his background is amazing!!!

So here’s the thing, Grand Saber’s identity. After some thought, I’d finally arrived to a conclusion, and that Grand Saber identity is none other than EMIYA.
You see, he can trace Caliburn, a holy sword and he’s a hero of justice right? So he’s totally someone to face a Beast! ! ! He also like to snipe people with swords, he’ll totally fit in with the rest of the Grands easily. Also since the Grands are a bunch a Buster memers, he’ll be a perfect fit ! ! !

Such a thing, amazing

r/grandorder - Shoutout to this guy. Oh how I love Fate franchise! 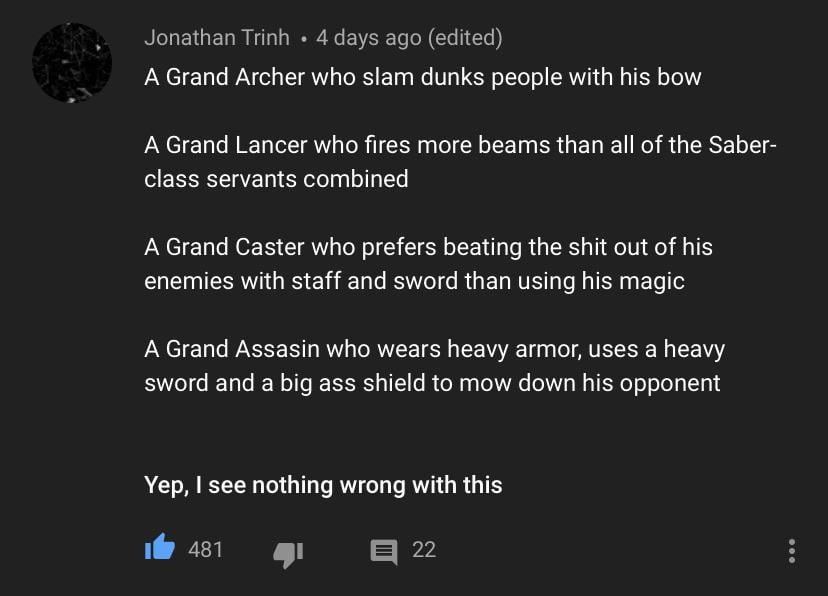 Oho?! I can literally smell.the joy eminating from this post! Hypothetically speaking of course.

But as for Grand Saber… In my opinion I would nominate Gilgamesh as the most likely candidate. Why? Well… He already has swords and sometimes fights like a Saber even in his Caster form, so all that’s left is for DW and Nadu to just give a the necessary class change.

Also… This idea started from the latest Da Vinci rerun. If you fight fake Gil he transforms into a Saber class with the Saber enemy NP charge bar too!!! Like wow!

Something like that would be super amazing! I don’t know how they’d implement it but I await with avid anticipation for.the glorious day when my King finally gets the class most deserving of his “sword of rupture” Dufufufu!

Honestly with all things considered i’d think it’d be Artoria or at least the OG Arthur. It’d be nice for him to come back but not only as Prototype Saber, he started the whole legend tf

We do know from his introduction in FGO that he’s hunting the Beast from Prototype, so there’s a good chance he’s Grand Saber.

I hope he is. The waifus have been too much give some love to the OG too smh

Emiya would be an interesting Grand Saber. I mean, I like he’s marksmanship focus and he’s weapon-flexible. He also has heart.

Gilgamesh does have Ea though. The most powerful noble phantasm in his ‘infinite’ armory. If it’s considered a sword he might be the most fit?

Not too sure really, just thoughts.

(This title almost feels borrowed from the popular discussions of a grand unified theory from physics. Random but yeah.

This intel is interesting…

Who can be the grand berserker?

Not really any actually. Just figured since Cain committed the first ever murder out of anger he fit the bill.

And the “from the beginning” was specific to the Grand Berserker in that thread.

I saw some other leaks regarding the grand servants from a Chinese server [image] TranslationsGenerally these translations are pretty good. I also happen to speak Chinese so I’ve added some commentary. <a class=“lightbox” href=“https://community.gamepress.gg/uploads/default/original/3X/e/5/e52bb827d116b412eb47c2a52c2e45936a523ec5.jpeg” data-download-href=“https://community.gamepress.gg/uploads/default/e52bb827d116b412eb47c2a52c2e45936a523ec5” title="ima…

A demi servant form like Shiro but kind of like mash fuses with Arthur. That’d be cool to see and imagine Unlimited Excalibur Works lol

That’d be really up there. I’d like to see that too.

How the quote of the post looks lol. Multi quotes kind of just break.

I don’t know how lul!

I thought it was some cursed image or a spoiler of a terrible servant design, but it was the quotes. Haha!