I never realised how tame the version we got in FGO is next to the original. 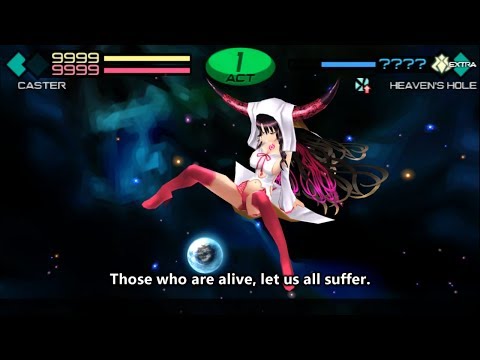 So where what the hell was Archetype:Earth doing when this happened?

what the hell was Archetype:Earth doing when this happened?

Enjoying the scenery, I assume.

This was in the Moon Cell, although her plan in both CCC and FGO for the world. Dissolve all life in ecstasy within herself so she can reach enlightenment and thereby “save humanity.”

She wpuld have failed though as regular Maradeva Kiara would be defeated by Saver (Buddha). Incomplete Beast Kiara is a tad weaker than her form in the Moon Cell but possesses Nega-Saver to counter him.

she puts the whole ass world into her vagina

i do that every night

she puts the whole…

My mental voice immediately read this line to the tune of “He Has the Whole World in His Hands.”

…yeah, that can fit, actually.

“She has the whoooole world…in her vag.”

She would have failed regardless, because the moment that Tamamo gets serious, she can just drop-kick the Mooncell and reboot the whole thing (which is exactly what she did at the end of CCC). Really, the only reason there is any hint of danger in the Extraverse is because Tamamo doesn’t want to show her true self in front of her crush.

Why tho beasts are hot

Guys are intimidated by girls who are taller than them? Tbf Tama can’t instantly return to Amaterasu, it takes time for her to regain the tails and she only does so with wibbly wobbly shenanigans in Extra for her (kind of bad - Tama 9) ending.

It takes her 1,000 years to regrow the tails, but since her true form can travel faster than light, she can effectively time travel at will, making however much time it takes irrelevant. Heck, the scene I posted above was Amaterasu plucking you out of the future to talk about how disappointed she was about how her bunrei was behaving, making it clear that she can see and mess with the future at will, if she wants to.

Basically, Tamamo is OP and never really in legitimate danger in the entire series.

That happens because the mystic code you equipped Tamamo with allows Amaterasu to glance into the future/detect you/links you to her origin, not because Caster Tamamo herself can instantly manifest Amaterasu’s powers.

But also - a fully reformed Tamamo isn’t Tamamo anymore. That’s why she cuts her tails off before she fully manifests. If she becomes Amaterasu again - great, you probably beat the big bad unless a Type/Sephyr, but now Amaterasu is here and she no likey humans.

(Also she is in danger in Extella, straight up says she would lose to Sephyr even as Amaterasu because she already did 10,000 years ago)

she would lose to Sephyr even as Amaterasu because she already did 10,000 years ago) Also are those fucking bunny ears

Caster Tamamo is a bunrei of Amaterasu, which makes them exactly the same. A bunrei is an identical copy of a spirit.

Tamamo definitely can choose to regrow her tails effectively instantly, as that’s exactly what she does in the game. It doesn’t matter how long it takes, because she can travel backwards in time to the moment she needs the power, as she demonstrated against Kiara.

Tamamo with all her tails is still Tamamo, she had all the same desires and motivations as her one-tailed Caster self. The only issue is that she can’t fit into a servant container with her full power, and therefore can’t remain at her beloved’s side with all her tails, forcing her to depower once she rebooted the Moon Cell. That was her entire character motivation from the beginning, she wanted to experience love as a mortal, and therefore gave up her divine power and forced herself into the Moon Cell summoning system to find a husband. She can take that power back pretty much whenever she wants to, but that would mean sacrificing the entire reason she was there in the first place. That’s why she only does it when there is no other way to save her beloved’s life.

My interpretation of the end of Extella wasn’t that she was afraid of losing to Sephyr personally, Amaterasu survived the white titan’s arrival 14,000 years ago, after all. Amaterasu is a solar deity, which is on a whole different tier compared to Earth deities. What she was afraid of was losing Hakuno. She says it herself, that what she was really afraid of was being left alone again. She didn’t want to see Sephyr wipe out humanity and take away her beloved.

That’s what I really like about Tamamo in general: she’s completely selfish in everything she does, and takes nothing seriously. She is a servant because she wants to be, she’s devoted to the MC because she wants to be, and she says herself that she would probably have devoted herself to any other master who summoned her in the same way. She’s a strong, independent woman who don’t need no man, but decides to play the doting wife because she thinks it would be fun.