How do you plan out your Servant Pulls and Quartz Saving?

Now, I’m aware that many people probably just set their sights on certain banners for the year and put hard limits on their spending, but as a GSSR-only player on my main and purely f2p on my alts, I have to pretty much plan all my quartz spending to the T. There’s probably any number of ways to do this, but here’s how I personally approach it.

As I’ve let it be known many times, I love using /u/zuth2’s FGO Manager tool. So I added another sheet named “Quartz planner” to my own copy, which looks something like this: 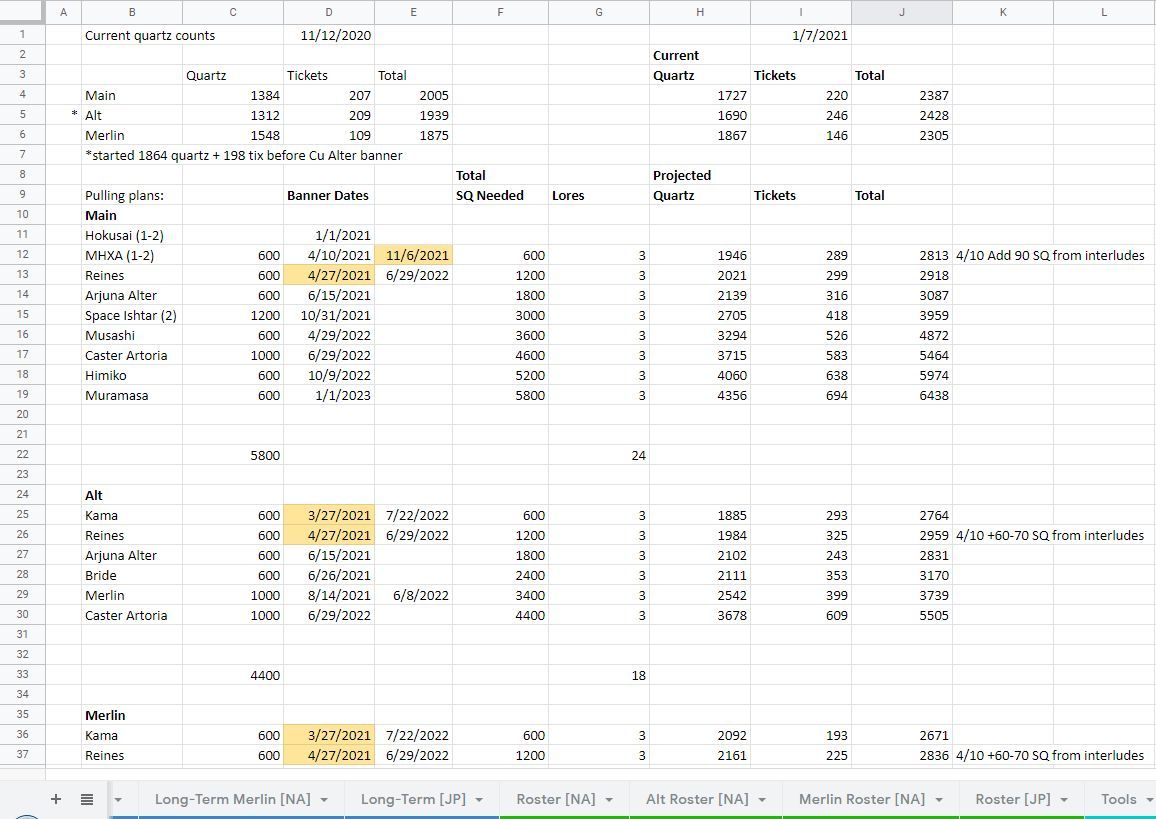 Now, what I do is look up the specific banner dates in the Servant Look-Up (which I then list in my quartz planner tab), fill my streak and quartz information in Summoning Planner, then enter in the banner date I plan to pull on. It will then calculate your expected quartz by that exact date in the Total row. I then list that in my quartz planner tab and repeat for each banner. If you already have the banner dates, you can just copy and paste each date one at a time into the “Up to” blank at the top of the Summoning Planner.

The quartz total is based on event quartz from the zuth2’s own Event Compendium as well as login, streak, and master mission quartz. It’s quite accurate, and the only thing it leaves out is variable quartz (such as the extra mission quartz for interludes completed in the 16 million download campaign). Actual banner dates will vary a little since the stated dates are original JP dates.

As you can see from my sheet, I tend to allot 600 quartz per pull since I don’t consider my luck to be particularly good, and I’d like to be on the safe side. Anyway, that’s how I plan out my quartz saving. How do you personally do it?

This is deep. I commend you.

I just make sure every Banner I want to seriously pull on has a gap of like 3-4 months from any of the rest so I can have a good sum of Quartz by the time it comes. Thanksgiving kinda messed that up but I should be back on track soon.

Simple, pick a few targets for that year, save for them, then proceed to do some impulse rolls on random banners cuz nearly everyone in this game is Limited

I cut down my target list to about 2 or 3 Servants for this year, it was a lot longer but I’m not counting on my luck to get all of them

I’m F2P peasant so I want to be efficient with my SQ. I don’t want many Servants but I want to get high NP levels on the ones I do want to get.

I skipped Old Li this time because he’ll have a banner with Summer Nobbu in the future.
Impulse rolls are a big no for me. That’s pretty much it, I don’t count how much SQ I will have when the banner I’m saving for will be up.

I put a very minimal amount of planning into my summons. Basically if I would like to get certain characters and there isn’t an event coming up very soon then I toss what SQ I have at them and see what I get.

Typically I try to have 1-2 10 summons per event to grab some CEs, though if there’s an event servant I’d like to get or a bigger event with more servants I like, as Summer tends to be, then I’ll save a bit more, usually stopping at around 3-4 10 summons.
Event reruns it depends if I missed anyone I wanted or not, for example I know I’ll skip the Prisma Illya rerun so I don’t have to save anything up right now and can freely toss SQ at the Swordsparrow in the hopes she’ll show up.

So I don’t really save up much, but I try to have a few 10 summons around for events and characters I’d like to get and then based on what’s coming up next I can decide how many SQ I can toss at a given banner.

I have been summoning when gacha urged me to and even roll on story banner for luck but ever since not getting ruler martha to np5 i have changed my strategy and gonna start saving up for servants i want.
Made 2 folders one for servants i really wanna get and another for the servants that would be nice to have but dont like either their kit/personality.
Also made this calendar to look back into Wow, some people really put work into this. And then there’s me, who usually never gets more than 100 sq without a lump sum payout because I can rarely resist rolling on anything

. Sometimes I have good luck, other times crap luck, but it evens out and I’m generally happy with the state of my roster anyway… So it can be hard to find the motivation to save seriously.

I go over the banners for the entire year as well as into the early stages of the next year. I look over all the servants that I have interest in , if they disappoint me or preform too similarly to another servant I already have in the same classing.

I spend money on SQ packs but limit myself to 2-3 per month. For this reason I don’t feel as stressed about all servants I want to summon , despite the fact I won’t be getting them all realistically.

Since I lack the big supports I’ll be trying my luck at Waver , Merlin & Skadi all in one year. This sucks because Kama’s banner is close to Waver&Reines who are close to summer and summer brings MUSAshi & Merlin. After that I have a little time to save for Space Ishtar and Skadi. I don’t have to roll for anyone else this year besides those however they are all big investments compared to other servants I’ve rolled for in the past.

How? Ummmm, I do it while crying? I don’t know man this is a hard question for me. There’s always a good banner every 3 months and 3 months are barely giving 200 SQ. I never hold more than 300 because a pack of 14+1 SQ alone costs a week’s worth of full day meal here, so I only spend like once a year.

Honestly me in a nutshell. I just think that the “fun” in fgo’s gacha is how random everything is. I get good spooks literally out of nowhere. Just keep on rollin!

Step 1: Make an actual plan for the year

Step 2: Declare publicly that I have no intention of rolling on X banner because Y reasons

Step 3: Proceed to impulse-roll regardless

I get a lot of Servants this way, but results vary, and wallet-kun doesn’t do eating out or traveling much; stopping at Step 1 is advisable.

I don’t “save” usually and do yolo rolls with the quartz that I have on hand.i keep the quartz from login bonus and milestone hidden in the present box so I don’t roll and use it for a character that I like. I usually pick 4-5 banner in a year to empty my present box

Basically i use Clairvoyance EX, choose the SSR target, then save/hoard SQ until the banner comes, roll it

So far i get all my SSR target this way, next will be Godjuna

And as my status as F2P, i consider myself having B+/A Luck in my book lol

Planning is easy: I pick the characters I want each year, save whatever I can until their release, then do 10-pulls on their banners like most people do. In the meantime use loose tickets to deal with impulse pulls.
My only self-imposed limit is if I don’t get a character after using up all savings and buying 1 biggest SQ pack, then stop rolling until this character’s next release.
The only times I actually have to pace myself or plan something is when there are several interesting banners in quick succession without a chance to stock up on ~200 SQ between them (like Valentine>Kama or summer 3> summer 4 banners).

When I joined in the middle of last year, I got immensely spoiled by a stroke of good luck while rolling on Skadi’s banners. I’ve since learned [the hard way] that the Pokemon mantra of gotta catch em’ all does not translate very well into this game.

I had a wish list some months ago that has undergone several revisions. Now, I’m rolling for my absolute favorite servants only, and so far, I’ve been pretty disciplined about it! I don’t have any limits, at least at the moment, but let’s just say that rolling over New Year’s left me looking at my wish list and wondering if it needs another trim

I do appreciate the fact that most of what I really want will be coming back in 2022. So, if I experience another set-back, it won’t be the end of the world.

Well… “Planning” has largely just meant making various cuts to the wishlist based on how valuable the servant is. I try to skip characters that I like or really want if I cannot realistically see them getting to bond 10 organically. Either that, or they have to have an extremely practical niche.

Then again, most of my cuts have been to achieve the dream of np5 Space Ishtar. If I would just do the sensible thing and stop at np2, I might reasonably achieve all of the high priority characters I desire.

But I am a Rin simp.

Wow, you do so much to save for a servant? That a sign that shows that you really want that servant.
I just choos a servant that i really want (for the moment that is Miyu) and try to not spend SQs the best i can (is kinda hard for someone like myself to save because i love to roll to try to get new things

Waiting around 3-4 months for an SSR will give you around 300SQ or something which gives you a decent chance at NP1… Most supports don’t require higher NP levels. DPS like Arjuna Alter for example do need NP 2 or higher to be “broken” as they are supposed to be so saving for around 6-7 months to get to 700+SQ is important… This is if you are completely f2p and have average luck on the specific banner… bad luck might result in no SSRs even after 700+SQ… This is how I mostly roll until I can’t hold my hand and roll on some random rateup…Just check the wiki for the summon schedule for the year and see which banners are worth your SQ… Events that get rerun may be pushed to the rerun if the servant isn’t something you need desperately…

Oh wow this makes it so much easier.
Since I’m F2P (aside from GSSR) I usually plan out a year or two in advanced what I’m going to roll on and use Notepad++ to log how many SQ I plan on using for each banner (as well as an allotted amount for impulse rolls per year), and sort by priority.
It’s been extremely successful thus far (I’ve gotten every servant I’ve saved for), but this will make it a lot more organized.

I REALLY need to learn how to use Google Sheets for more projects it’s pretty useful.