I thought I’d put up a brief overview of how she stacks up in Class relative to Artoria & post-buff Altera. I’m trying to avoid this becoming a wall of text, so it’s short factual statements & separated out into headings. You should be able to easily come to your own conclusions on their actual efficacy. You can quickly see their card damage multipliers in different circumstances & what their supported NP damage looks like, and with the references to Merlin/Waver/Skadi hopefully the values are…

Ibuki has high attack - the highest for her class - while being basically the worst in terms of HP. She has 4 passives but only 1 is that great - Dragon Kin EX is a 12% Buster and a 200 Damage Cut. She’s got a Divinity variant that gives a flat 250 attack bonus and increases her buff removal by a little, then Riding and Magic Resistance which are normal for Sabers (do more Sabers have Riding than Riders do? I’m actually curious.

Her 3rd Append is anti-Ruler. They aren’t that common an enemy to find and they’ll still resist her damage anyway.

S1 is a large NP battery - finally, we have a Saber that actually has 50%. Mordred and OG Saber had 30% ones that could add up to 50% (or more) after their NP, Suzuka had 50% but spread out over multiple turns, and then there are a few like Jason that can NP refund enough that they don’t need a full battery, but this is the first AoE with it just actually there, ready to use. It also has a 3-time 40% Attack buff - great for farming or Buster Brave chains.

S2 is a 3-turn Buster increase (30%), 3-turn Defense buff (30%), and a 1-time star bomb (20) on a nice and short 5-turn CD. As Ibuki is a Buster gorilla, and she already has a pretty good passive that gives her more Buster and defense, this skill adds to her kit nicely. The crit stars also help with her s3.

Said s3 is a ST NP Seal (very nice skill), 3-turn Crit damage buff (50%), and 3-turn Special Attack vs. “Undead”. NP Seal is always a nice skill to have, and the stars/Buster buff from her s2 go nicely with her crit damage here - she doesn’t have any weigh to change her star weight, and as a Saber it’s pretty middle-of-the-road, but if you run her with Casters as support she should still pick up most of them herself. Undead isn’t a very large enemy group though: Ghosts, Ghouls, Skeletons, Scarecrows, Zombies. The Black Samurai that show up in Shimousa and the Dark Shinsengumi from our last Guda Guda also are Undead. Skeletons, Zombies, and Ghouls looked like the only ones she’d have class advantage against (Ghouls are usually Berserkers, while Skeletons and Zombies can be most classes.)

@Cards covered her NP damage pretty well in his thread linked above, and how it compares to OG Saber, Altera, and Muramasa. Going into it briefly again here, it’s an AoE Buster that pre-casts a 1-turn Ignore Invincible and then a post-damage Buster Resist down based on overcharge (20%—>40% @max OC). It also Ignores Defense so it can be useful for some harder fights.

When she released, I remember thinking I liked her more for challenging content than farming - really, a lot of CQs from events are boss rushes in one form or another, so AoE is actually pretty helpful, while having tools like a passive damage cut (stacks with someone like Waver or Reines), her own Defense buff (also stacks with Waver or Reines), high attack and crit damage, and Ignore Invincible/Ignore Defense that are probably going to see use.

For instance, in the Imaginary Scramble event CQ, we had Gilles and many different Jeannes as backup. While ofc Ibuki would have struggled vs. Archer Jeanne, she is AoE and would have class advantage vs. Summer Jalter + Santa Jalter, been neutral vs. Gilles/Lakshmi Bai/Jalter, had at least some extra damage via 3rd append vs. Jeanne, been able to get around the taunt thrown on Gilles due to being AoE, sealed Jalter’s NP that would pierce any Invincibility skills you had, and been able to get around either Jalter’s Invincible skill or Jeanne’s NP-based Invincible to guarantee damage.

But when it comes to farming, I’m not as impressed. She can work, of course, even now, the way any 50% self-charger can. And her damage is going to be pretty good. But if you already have a built OG Saber, she works just as well for that currently. I’m always hesitant to summon a servant just because they could have greater performance in the future if I could summon someone else for them. FGO gacha is harsh, and if you bank on using her + double Koyanskaya but then you fail to get Koyanskaya, she’s just a side grade to Artoria.

But check out the first linked thread for what she can do with support, as it does make a big difference to her potential.

Why does ibuki have a riding skill anyway? What did she ride in her lore anyway?

Riding skill can be simply because you can tame rideable beasts. The various Oni obey her automatically and she can manifest Orochi heads, so one of these could be rideable.

For instance Quetz has hers because of the winged dragons that serve her. 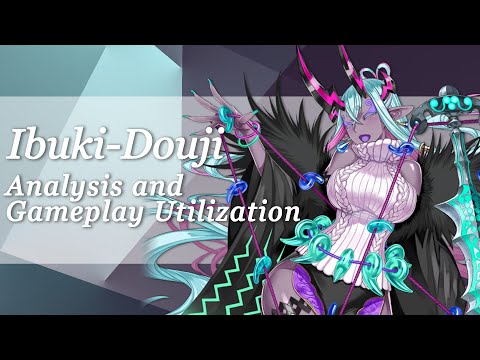 Though do keep in mind that he does have her NP5 lvl 120, and even though he’s aware of it it still skews your perception at times.

God shes so ugly. I dont care how strong she is i cant make myself ever pull for her

Riveting opinion you have here, great way to add to the discussion, don’t trip on the way out.

Imagine being this dumb and posting a comment to let us know.

I’m one of those people who thinks Raitaboob is gratuitous and weird, but I barely even notice it anymore. It’s basically a trademark style by this point. My feelings toward Raikou, for example, have actually become much more positive over the years thanks to her surprisingly good characterization.

I think we’ve all gotten our opinions out in the time between Raikou and Summer Murasaki, so Ibuki doesn’t faze me. I initially commented on her design at her release, but my rolling decision has little to do with that. I think she’s pretty cool, just wasn’t sold on her enough in the story and am feeling a bit anxious about my rolling plans for Morgan, Melusine, and Oberon since I’m thinking I might NP5 them all.

anxious about my rolling plans for Morgan, Melusine, and Oberon since I’m thinking I might NP5 them all.

Haven’t you had 5 unplanned NP5s on the side to the planned ones since Summer? What’s 3 Servants?

I feel like we’ll check in in 2 days and it’ll be the usual “ah yes, NP5 I see.” I don’t believe these porky pies when you’ll have a whole recent history of “they’re bad and possibly ugly” but still NP5!

we don’t talk about my Yuyu

I am going to take a crack myself but can’t guarantee it, and I’ll settle for whatever with Muramasa onwards so long as I have the new supports.

LB6 and personal circumstances/life pivots will tell with time.

Back on topic, Ibuki is a sidegrade but I like her animation set. Equally importantly I’ll be going NP5 next on Koyami, whom Ibuki is on trait for and can NP with.

I’m grateful to be gainfully employed, but my funds have limits, so having this many unplanned gacha babies does eventually catch up with my gaming budget even if I don’t spend on other games. I need some time to build back up before I go too crazy again.

The main reason I want Muramasa is just to have him since he’s part of the story, but I’ve never been a huge Shirou fan. I don’t dislike him, just kind of blah about his character.

Gameplay-wise, we’ve watched him get progressively buried under a series of competitive Servants. I’ve said as much before, but even his crit game doesn’t even impress as much once one is accustomed to the delicious cocaina that is Douman or Van Gogh. What I find most appealing about his gameplay is his s3, and even that can be imitated to a limited extent by Koyanskaya support.

Ibuki appeals to me more than he does right now.

What I find most appealing about his gameplay is his s3, and even that can be imitated to a limited extent by Koyanskaya support.

Ibuki appeals to me more than he does right now.

His s3 is more about extra consistency and I don’t think it matters much to an optimal team because they’re either going to have enough battery or he’s going to crit refund 200-300% anyway.

For lower end teams or soloing I think the s3 pulls its weight quite hard.

His s2 is great but if you wait to time it you won’t have stars to giga crit with without also blowing his super projection. And if you want stars enough for a good shot at critting without using s1 you want it up turn 1.

So yeah, not quite the prodigal son he was once hailed as.

I’m still in the camp of wanting him at NP2, because Sugiyama is part of my intro to Japanese dubbing, he’ll have a major story chapter with no rate-up and he’s pretty cool anyway. NP1 is feelsbad if you ever step away from advantage.

He’s definitely the smarter pick right now but Ibuki’s animations are >>> in general.

A little over 8 hours to go!

I think she’s coming out tomorrow. Unless they decide to give her to us earlier.

Second banner launches a week after first banner, in 7 hours it will have been a week.

Didn’t douman come out on monday though?

Edit: Nevermind. I looked back and realized that the maintenace started on Sunday, but finished on monday.

“Ugly” is such an odd descriptor, when she’s just gratuitously over-endowed as is typical of Raita. If anything, “grotesque” would be a better descriptor, as she’ll fall into the ‘uncanny valley’ due to her inhuman features. If you ran her through a warm filter and removed the horns, she’d be a relatively ordinary gyaru.

Personally, I already have Saber the Hun. Story-wise I’ve only gotten her introduction. I’m busy saving SQ for Melusine, Koyan, & Oberon, hoping to ticket Summer Red Saber (Caster). I don’t really have the need or budget for her at this time. Nevertheless, if she impresses me in the story, I might throw a few tickets at her for potential DKSO buster looping.

^
This bears repeating. We’ve all known for X years that Y person doesn’t like Raita’s Selvaria/Raikou brand of design. Can we not repeat this song and dance?

I might throw a few tickets at her for potential DKSO buster looping.

Basically everyone DKSO loops. Don’t roll unless you actually want her; being able to loop is of no inherent value when the majority of the game’s roster does so.