Been playing FGO for a year now and I’m enjoying it so far, particularly the events. Aside from the holiday events like Christmas and Halloween, I really like the nonsense ones that are not tied to any special occasion like Da Vinci’s counterfeit event where at the end of it just turns out it’s a servant throwing a tantrum.

So just wondering if anyone has any ideas for others.

I have an idea for one where Scheherazade, Shakespeare, and Anderson team up to create a massive fantasy world reality marble. Scheherazade creates the setting, Shakespeare supplies the characters and Anderson gives them attributes.
Event bonus servants with increased drop rate for event items would be heroes from works of fiction like Holmes, Jekyll, Robin, Beowulf, etc. Heroes from myth like Atalanta or divine spirits like Parvati wouldn’t count. Neither would bible characters like David or Sheba.
At the end of it would be Nursery Rhyme throwing a tantrum because Jack and Ibaraki teased her. So she asked the three storytellers to make her a fantasy world where she can escape to. She gave them a holy grail that she found to help them create the fantasy world and after consoling her, she decided she doesn’t need the fantasy world anymore and give it to you.

Would love to hear other’s opinions or ideas

At the end of it would be Nursery Rhyme throwing a tantrum because Jack and Ibaraki teased her.

Awesome idea. You could build in some Fate/Extra lore too. Like have the Jabberwock be a boss or a battle where Nursery Rhyme uses her NP The Queen’s Glass Game to reset the battle if not completed within a certain number of turns.

Personally, I’m waiting for a Tsukihime collab. You know, when they finally get around to finishing either the remake or Tsukihime 2. So…

I would also accept a Melty Blood collab (about as likely to happen).

The other one I want is a steampunk themed one. I know London had hints of steampunk but I want a full on steampunk event. I have a couple ideas. Either one that focuses on Babbage where he creates a singularity by completing his difference engine while he was alive which leads to a steampunk world or something involving the authors and H.G. Wells and Jules Verne. I haven’t really though much about how it would work but I know I would want Captain Nemo from 20,000 Leagues Under the Sea to be the event servant.

Personally, I’m waiting for a Tsukihime collab. You know, when they finally get around to finishing either the remake or Tsukihime 2. So…

I would also accept a Melty Blood collab (about as likely to happen).

A White Day that can actually match VD.

I’m not playing JP but I like the concept of Sherlock event. I hope they make other events like this. 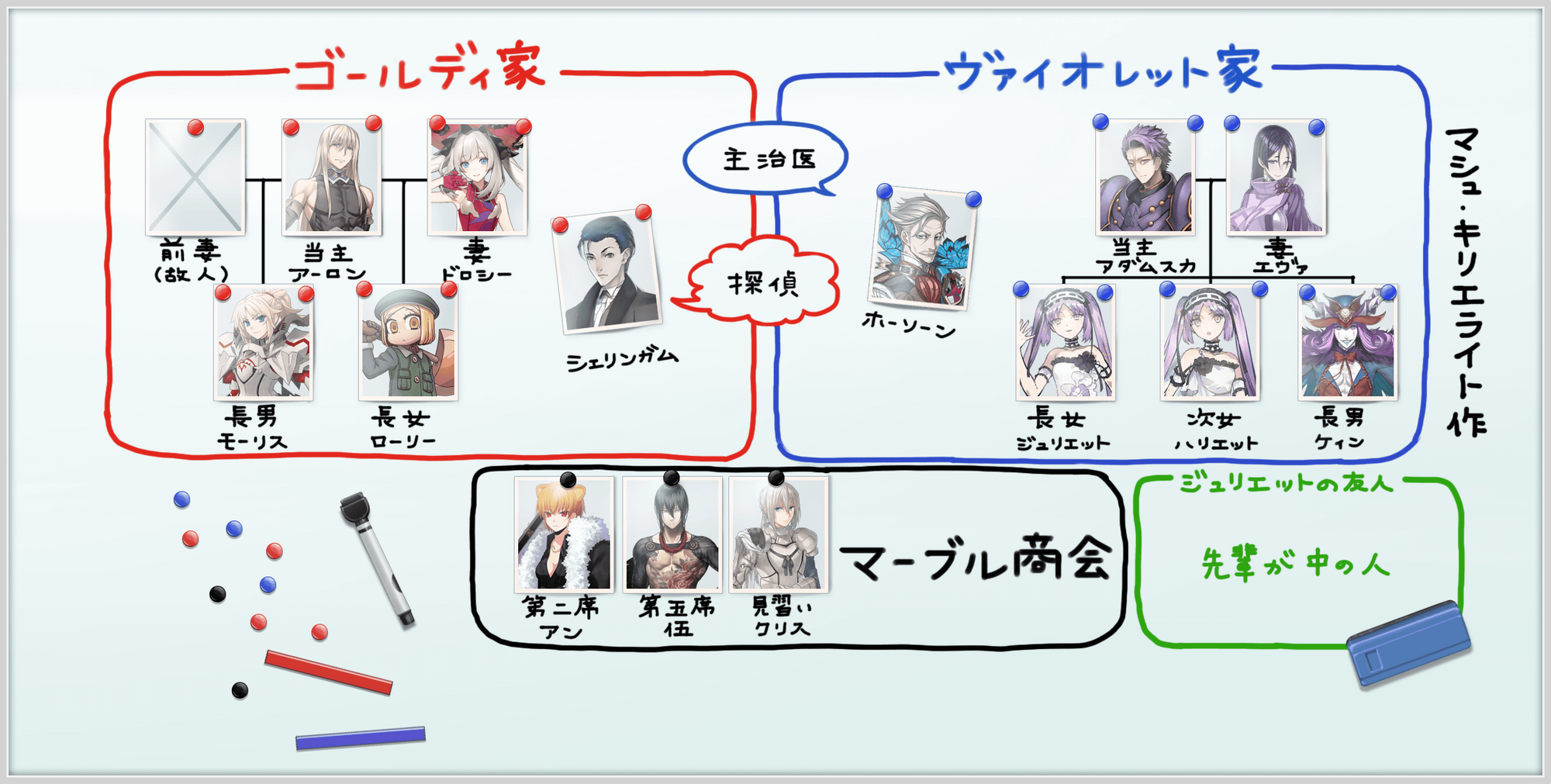 Tsukihime is a question of when rather than if. Arcueid is one of the most wanted Servants not yet available and the VN is being remade. Maybe

A Fate Strange Fake event should happen eventually as well. It’s one of the most requested anime adaptations in Japan and when that happens we’ll get a collab event. I guess this depends on how far through the story the LN is and whether they want to adapt all of it in one go.

Shogugeki no Shirou.
Muramasa for new event rate up servant.
Emiya just hunting down muramasa to kill it and in the end of event he’ll admit it’s just ridiculous

Another racing event like 2nd summer, or maybe event like gudaguda.
Also if we already get Extra CCC collab how about Extella Link Collab.

Hear me out, Emiya-san Chi no Kyou no Gohan collab event.

I don’t know if these have been done already since I don’t use my Clairvoyance to peer deep into the future beyond summon banners. So maybe these ideas or servants have already been added.

A) An event that goes through the tale of Beowulf. You could even introduce Grendel (who I have a feeling would get waifued), his mother, and maybe even make the unnamed dragon that is his final opponent a servant. If not, the dragon can be a new type of enemy. They could even take cues from the 2007 movie of Beowulf where not everything is as it seems. It would be nice if Beowulf gets an update at this time too or perhaps a new class. Maybe a Beowulf Saber version. The Beowulf that is now a king and his final battle is against the dragon.

B) An event based around the Dragon Palace. It came up during Agartha but unfortunately wasn’t used much. I don’t know much about the story behind the palace, but it has the protagonist Urashima Taro and the princess Otohime. Both sound like they could be servants with a water theme. Otohime perhaps could be a dragon like servant similar to Kiyohime. Best of all this could give reason to bring back all our pirate and seafaring servants (yes, even Blackbeard and Rider of Resistance) because this is a group that rarely gets any play. It could even be a chance to bring in a few new pirates and seafaring servants like Horatio Hornblower.

C) A crossover event with Shin Megami Tensei. As another series that uses a lot of mythical, folklore, and divine heroes, demons, etc. It would be fun to see servants meet such drastically alternate versions of themselves as well as maybe introduce characters that haven’t been used in both series.

Lancer Scathach meeting the SMT Scathach who is probably closer to a caster with a witch like appearance. Shuten and Ibaraki perhaps taking control of the entire oni race in SMT or meeting the four major oni of that series: Kin-ki, Fuu-ki, Sui-ki, and Ongyo-ki. Maybe Nitocris and Ozy facing off against Set, one of biggest deities in Egyptian myth. The weak Fate Angra Mainyu meeting the SMT version who is comparable to the Christian concept of Satan and usually one of the last bosses in games he appears in.

Unfortunately most SMT games might be too dark and dismal for FGO as well as less waifu/husbando possibility, so they probably would use one of the more popular Persona games. I’d rather one of the SMT games, but a persona game could make an interesting setting. Chaldea could become a band of thieves or perhaps finally getting the high school concept where each servant is a anime student cliche.

We need a Carnival Phantasm crossover event with Saber Lion as an event servant, and a lancer class Herc that’s wielding Cu Chulainn as a weapon, not sure which one should be the welfare.

Okay, hear me out: You know how anime has recap episodes? That, but with the Riyo Bunny rider making movies of our adventures as a framing device So she shows up, wants to know what happened before she got here, and you bring her up to speed, and thinks they’d make for hype films. She starts filling in the blanks with stuff like dramatic moments, Shamalan style twists, awkward romantic moments, anything she thinks would sell tickets. All in all, just a fun little joke event with filled with nostalgia.

Alternatively, it’s not even about our adventures, make it her trying to cast the original FSN with our servants and FSN cast all going "Okay, why am I getting so much deja Vu’ while Emiya is constantly rethinking his life’s choices trying to hold a straight face. So imagine dumb stuff like Riyo Rider trying to recast Medea with her younger self, while also trying to do the same with the Saber and give her role to the Lancer versions(for fanservice reasons, this is a movie after all), while all the other Saber faces are fighting trying to take the role of Saber before Nero eventually wins, Prisma Illiya being too scared of Heracles, so Jason gets cast as her, and Amakusa gets cast as Kotomine because the budget ran out and he already had priest clothes.

Or Melty Blood. I want to learn about the lore of Melty Blood, because Nrvnqsr(Yeah, I dunno how to pronounce it either) always beats me before I make it too far into the game’s story, and in case someone suggests at some point: “So hey, you know that Melty blood event is coming to NA in a few months, anyone wanna try and play together before it hits?”

I suck at fighting games, but jump at any chance chance to play against people. I’d be wining on 2 fronts if that happened, so I’d actually be celebrating.