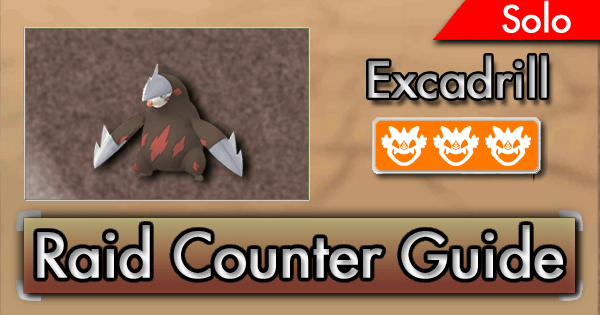 The Gamepress guide is based on it being a T3 raid, which would be rather easy.

However, Excadrill is currently in the game as a T4, which isn’t possible to solo. Doesn’t seem to be too difficult as a duo.

Despite T4 being able to make a possible solo, I don’t think Excadrill it’s the case. You see, most T4 solos are from Raid Bosses that share a double-weakness to something (Shiftry being double weak to Bug-types and Charizard being double weak to Rock-types). Even with these conditions have been met, you still need weather boost in order to accomplish it. Though, there was an incredible exception of a guy who made the Blaziken Solo on windy weather using 6 maxed out Psystrike Mewtwo, but only being able to get the solo because Blaziken had Blaze Kick and he had a little lag on the attacks the last 10 seconds.

Anyone could think Excadrill is possible as a solo because it’s miserable defense (113 on average as a raid boss). The best chance is on sunny weather with a team of Blast Burn or Blaze Kick Blaziken. Now, keep on mind though, in order to solo a Tier 4, you need to reach 50 DPS in total in 180 seconds. I’m pretty sure Blaziken has 41.3 DPS in a neutral weather, and if the weather boost provides you a 20% boost it would be an grand total of 49,56 DPS. Fairly close, but still not enough to make it.

I’ll try it myself and see how close I’d get, but I’m pretty sure the solo isn’t possible because of the lack of DPS needed. Maybe when Reshiram arrives, it will be enough to get the 50 DPS mark. Hope it helps!