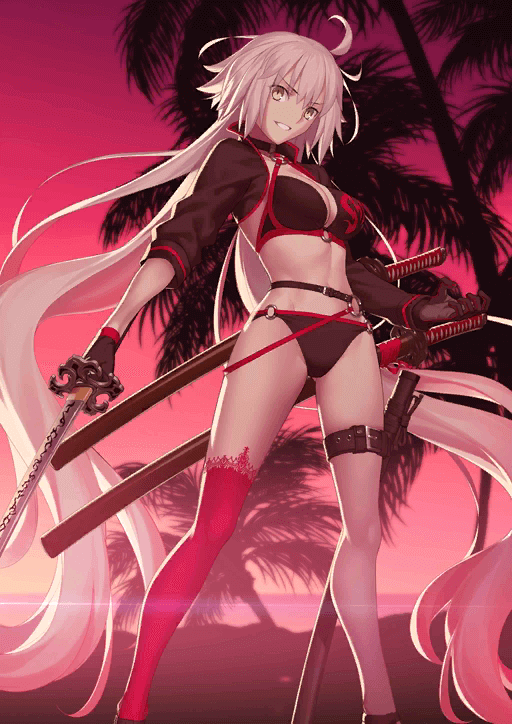 As they mention in the review, I wouldn’t let the evade for 3T fool you - Jeanne d’Arc (Alter) (Berserker) isn’t going to have much staying power in long fights. Low HP, a 1k demerit (equal to 10% of her base HP), class disadvantage, and an evade spread out over 3T instead of just being 3 hits.

NP5 ST Berserker with good attack and steroids is still a godsend - she’ll do plenty of NP damage (120k ish maybe?) - those are serious numbers and quick to fire off bc of her 20% gauge. Buster for Merlin memes. Lacks the crit focus of her OG Alter self, and trades that for DoT in the form of Burns…but DoT isn’t a great gimmick to have. Her NP burn is significant though - 9k extra damage isn’t nothing by any means, but is still inferior to what a buffed Buster crit would do in 1 turn.

Like Ushi Assassin, I think her mats shouldn’t pose a problem for the majority of players. Gallstones are among the least needed Gold mat in my experience; only needs a small number of Pages and Shells; and 60 Magatamas.

Wouldn’t be surprised if a decent number of people Grail her - either out of love for character or need for a ST nuke with wide coverage.

Don’t think there’s much to say here, on my part anyway, as it’s a pretty agreeable assessment. Big stick, big boom, has a measure of survival but can still die to a hard sneeze if focused on (if not, surprisingly ‘durable’), handle with care… still going to explode your enemies regardless.

only needs a small number of Pages and Shells

Which I must say is a godsend

East mats, a 20% battery and respectable NP damage on top of that make her perfect as far as low-investment nukes go

The 20% battery is just there, too -no investment needed, just like with JAlter Lily. Another positive for her. Makes her very easy for newer players to use.

But yeah, I expect to see a lot of people grail her.

Good for blasting a high HP enemy during farming, while in longer fights she needs more support than you might expect. Personally I think the amount of burn damage she can push out is good for harder content, being able to bypass defensive skills, and the sheer amount she can potentially stack helps beat debuff resistance.

Thankfully I got my first two single target beserkers while rolling for skadi, penth and Hercules. If I need a nuke, I can use lubu.

Otherwise as f2p I might have been forced to use jalter, who is easily one of my least favorite character in game. Now I can play the event and see if my opinion of her will change.

Honestly she’s on my list bc my Berserker luck has historically been terrible, and the best ones I have are at bond 10 Herc; Grailed Ibaraki) or almost (MHXA).

But I won’t do it right away I’ll see how often I actually use her first.

By ~30K. A worthwhile trade-off though with the AEs faults in mind - or at least easier to tolerate.

Only if facing Cavalry classes. Keep in mind S-Jalter can take on Knights that Mecha Elli can’t.

I’m so eager to grail her! RIGHT! THIS! INSTANT!
MY GRAILS ARE GLOWING!! THEY WANNA BE USED!!! I EVEN SAVED OVER 1000 EXP EVEN THOUGH I DON’T NEED THAT MUCH FOR HER! I NEVER EVER DID THIS BEFORE!! I’M SO CLOSE TO LOSING IT!!! I CAN’T WAIT ANYMORE!!!

But obviously for her References to my Favourite Anime Yu Yu Hakusho!

References, for who does not know, are 2:

1- she does as a normal buster attack the Trademark attack of the Anime’s main character Yusuke (don’t ask me the name, because i know it only in italian. )

2- her NP is a strong reference the strongest attack of one of the characters, Hiei (black dragon flames… again, i know the name only in italian)

She is fine, Joan d’Arc Alter in a swim suit. Better Np gain than many zerker. High Np dmg. 1 evade each turn is enough in many fast boss fight. I’m aiming Cú Alter NP2 for CQ but still give her some chances to shine.

Pages? Again? Everyone wants my pages lately! And of course it’s the first mat she wants.

I might hold off on skills until I secured a bigger library. Besides she’s got to complete with triple 10 Penth in the single target zerker department. Since you usually want the nuke on T3 not T1, penth has 40% more battery which means max aerial dive compatible without help

I pulled Tomoe just about a week or so ago, still working on levelling her (because of course she had to show up after I used all my embers from the event), but I’m looking forward to seeing how far I can push the burn dot damage between the her and Jalterzerker.

The actual problem you would sooner run into - and this applies to both - I’d wager, is dealing with a W3 boss and a bulky add, instead of the 1, or 1+2 trash (which is simple AOE+ST or one very strong AOE). And we’ve been getting nodes like that since Babylonia.

Neither are particularly durable anyway outside of farming, and in that regard I ultimately give it to Zalter for having any form of hard survival at all.