Congratulations on your nuptials!

As for the missing OG version… Well, many a broken master has underestimated the elusiveness of rate-up 4-stars…

I’m not gonna complain about my haul but I do wish my OG was better than NP2. 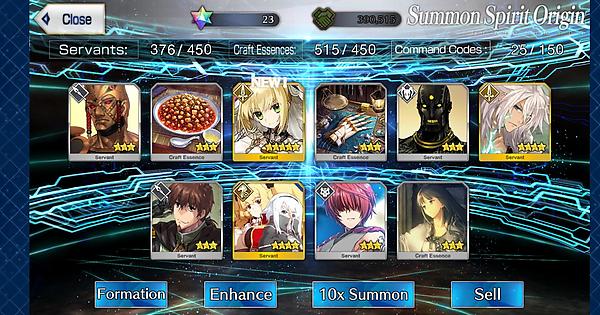 Well, many a broken master has underestimated the elusiveness of rate-up 4-stars…

and then there’s the elusiveness on 3 stars to consider

2 pulls and umu came on a rainbow summon

Seems like my luck is working on yolos rather than saved targets.

Could someone redirect me to a thread that already had a full discussion on umu bride?

This is a recent thread about umu while waiting for CasSeiba

Is nero bride worth the pulls with castoria looming? FGO Discussion

Hello everyone. I’ve been a forum user for quite a while but hadn’t registered yet. I’ve been playing the game for over a year now and have 700+ SQ available for AA and the nero bride banner. However I’m staring to doubt if summonig bride is worth it. I already have Gordon Ramsey as an arts ST saber and arts looping arguably only becomes better than quick looping when castoria drops (and double castoria does not seem to need bride for looping). With castoria it seems that bride is a bit redun…

b21520×720 625 KB
Ok, so my account is just a bit short of being one year old. One of the reasons I was rolling on Bride’s banner is because it has no event CE rate-ups, so higher chance of those nice general pool CEs. Well uh…no 5* CEs. So I still have no Kscope. Or BG. Or 2030. Or Bodhisattva. Or even a single copy of IE. On the other hand I have MBL Origin Bullet, VSoD, Knight’s Dignity, Gandr, Gentle Affection and Angel’s Song. I am not going to complain. These rolls were very lucky. But my CE pool is very lopsided.
12 Likes
KeskaSuu June 17, 2021, 6:00pm #191

I convinced my friend who was losing interest in the game to do 2 back to back multis after cashing in some Master Quest SQ and fragments.

Their account has some great servants, but they seem to get spooked constantly by servants they already have and miss all their targets (except Kama), so they’re at NP2+ for:
Fran NP3
Heracles NP2
Circe NP3
CasGil NP3
Nito NP2
Asclepius NP3
Nightingale NP2
Tomoe NP5

So they did the 2 multis and got a Valkyrie spook. Then they ALMOST backed out of the next multi, but went for it anyway. 2 of their most wanted servants came back to back on rainbow spark rolls.
Waver
Jeanne Ruler

Now they’re psyched for summer and are going to be farming embers for the next few days. No Neros, but the Waver spook was a good consolation for any account. Waver+Asclepius is going to make that NP3 Fran much more viable for lottos and stuff until they can save for a native Skadi.

Next OG Umu rate-up, when?

The irony of having caster and bride Umu but not OG Umu.

Those are the kind of stories that bring me joy.

Kudos to your friend.

Congratz! Wait…weren’t you on break for a month?

Yeah. I was able to complete a lot of my project during the past week, (if my calendar is right), then I realized that I had no QP, nor apples and nor embers and was pretty much broke. So even though I said I wanted to take a month, and I was was going to come back near the anniversary, I ended up cutting it short due to lack of resources. Mostly apples.

I got tired of spending money (quartz) on refills, so I figured I’d pop back in for the apples then I realized that i can only get them if I spend the entire 5 days on online. So I figured why not go ahead an end the break early.
Granted, I do feel recharged though. So the time I did spend off did help.

Next OG Umu rate-up, when?

Hmm… Not sure, I haven’t really planned ahead further than Spishtar, and I knew I wouldn’t need any more copies of OG Nero after this banner, which is why I spent my last Nero NP Upgrade Ticket on Salter. Still ended up having to burn two extra copies, but that’s suffering from success.

I got my very first OG Nero on a Saber class banner (also the best way to get Bedi, if you care), so if you’re serious in your devotion, that’s probably your best shot. I don’t generally recommend class banners though, I only rolled on it because I was new and had no gold Sabers.

Bruh, if you had said “Cuz the Umu calls” that would’ve been fine too cuz we all understand the Call of Umu.

Welcome back then. What counts is that you feel refreshed and in control. Yep, being broke sux. I’m broke with embers and QP too, and now I got 2SSRs to max. That lotto/fest can’t come fast enough.

Didn’t particularly care about getting her, so I only decided to use 1 ticket. The card sparked gold aand…

This now brings my 1 ticket ssr count to up to 3.
At this point, it seems to be the norm for me.

Well, well, what have we here?

Somebody who should DIE IN A FIRE

Obligatory “f2p btw” to complete it. Tbf my recent gatcha luck has given me pretty much every big supporter besides merlin, so I didn’t really need her for gameplay. As for personal preference, well…