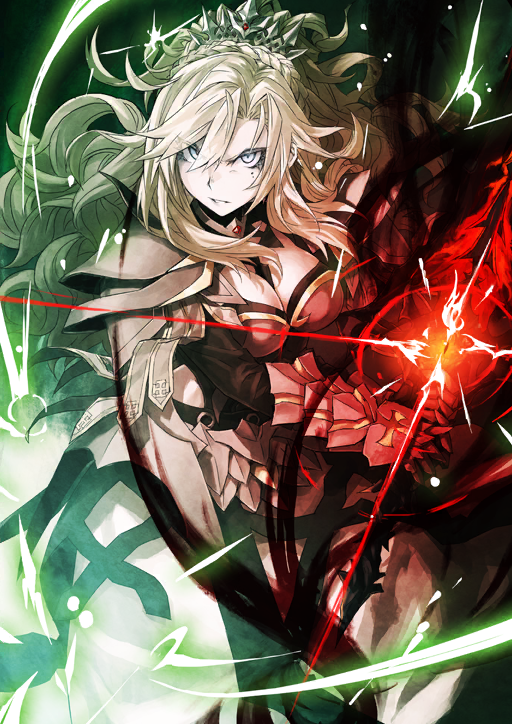 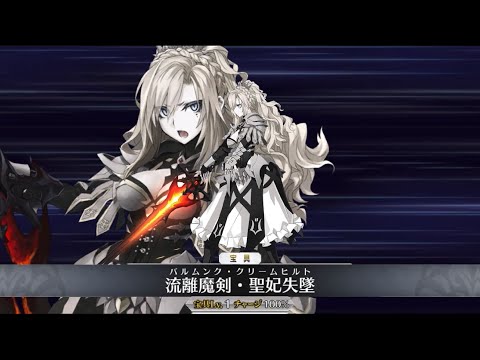 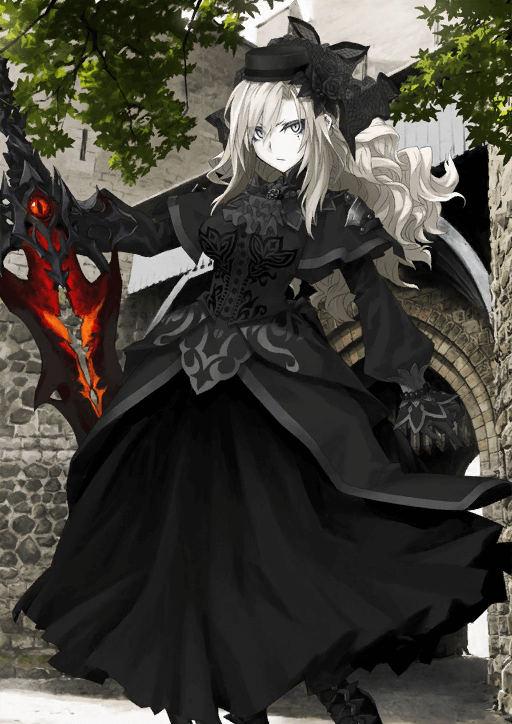 Do you guys remember the time when EMIYA had a skill that gave 35% Arts effectiveness for one turn, and it was considered to be his best skill? Now we have new servants that just casually come out with 30% Arts/Buster plus 50% special attack for three turns, with the same 6 turn cooldown, and it’s not even their best one…

Even her attack is really good, 10.4k is 4th amongst 4 star Berserkers.

Really hope she is AoE though. But she is ST now, imagine if she is AoE with that stats

I must have misread it.

As a Zerk Art ST she is still pretty good, but she just has great competition with Morb and Galetia. Her skills have some nice utility. Not sure if her dmg is enough as 1T nuke and run Zerk?

shes attractive and got a good kit. Might roll for in 2 years

Kriemhild is the German name of Gudrún, the Norse version of the myth. Gudrún is the one who marries Sigurd. Or Siegfried in the German branch.

Indeed the kit is very fitting to her lore. Her story is full of revenge and absurd losses, fully fitting a Berserker with madness EX. Her being ST also makes sense considering her vengeance storylines.

After Sigurd is killed, Brynhild (or Brunnhilde) kills herself, which prompts her mortal brother Atli (Attila) to have an excuse for revenge, as now the region is weakened without a hero like Sigurd/Siegfried around. Bryn also kills the 3 year old son she had with Sigurd, while Kriem is also pregnant with another child, Svanhild, at the time.

Gunnar (the one who had married Brynhildr/Brunnhilde) then marries his sister Kriemhild to Atli to forge an alliance.
Atli plans a feast which is a trap to kill her brothers and take the region and the dragon’s hoard treasure. Kriemhild/Gudrún warns her brothers, but they ignore her and they all die on the ambush.

Years later, Kriemhild/Gudrún kills her children with Atli, cooks then, serves him, then tells him what she done and kills him, achieving a long waited vengeance. She then tries to drown herself, but ends up washing ashore in another king’s land, whom she marries and has three sons.

Svanhild, the daughter she had with Sigurd, joins her in this court. She is later married to some neighbouring king. He’s much older and she’s a teenager and the most beautiful woman of the lands. He feels insecure, says she betrayed him and has her killed, stomped to death by horses.

Gudrún/Kriemhild loses it once again, and mad with yet more grief (Svanhild’s death hits particularly hard on her) she orders her three sons, still practically children, to go avenge their sister. They go, and also die. Some versions continue for a little bit, mostly she’s gone from the stories at this point.

While Bryn/Sig is the more well known story, for most scholars and delvers of the lore, the real tragedy is Gudrún/Sig. After all, she’s the one that loses 3 families over her life, including Sigurd’s two real children. Even Tolkien wrote “The Tragedy of Sigurd and Gudrún”, though I think it was released by his son later.

Also Auslaug, who thanks to TV and other material is also often thought to be Sigurd’s daughter, while her only real reference to this is not a single paragraph, or even line, but a single short sentence invented and shoehorned into the myth by whoever wrote the retelling of the myth in the Volsunga saga, an author who also modified a lot of other things with Bryn/Sig/Kriem myth.

Meanwhile his true daughter was Svanhild, with Kriemhild as the mother, but comprehensibly she died young and early, and for this is not well-known. Lasagna will probably make her some loli if she’s ever added.

Kriemhild is the German name of Gudrún, the Norse version of the myth. Gudrún is the one who marries Sigurd. Or Siegfried in the German branch.

Since there are different versions, I’ll shorten up the Nibelungenlied since that’s what I think of for Kriemhild (even though Brynhild is my favorite FGO servant and I don’t think of this version for her).

Siegfried comes to the court to try to marry her. Siegfried helps the Burgundians win a war and they’re finally allowed to meet, they fall in love. Siegfried helps Gunthar (Kriemhild’s brother) marry Brynhild (in this version a queen from Iceland that would only marry someone stronger than her; Siegfried puts on an invisibility cloak to help Gunther win the challenges). Gunthar marries Brynhild and Siegfried marries Kriemhild.

Bryn and Kriemhild fight over who’s married to a husband that’s more powerful (due to Siegfried initially lying about his status to Bryn) and that causes a falling out between Siegfried and Gunther (also over whether or not Siegfried took Bryn’s virginity, since her competition continued to their wedding night and Gunther was initially unable to beat her so…invisibility cloak Siegfried stepped in again). Hagen (Gunther’s lackey) plots to murder Siegfried and gets Kriemhild to reveal his weakspot. He and Gunther kill Siegfried when out hunting. Kriemhild inhereits the Nibelungen (treasure hoard) from Siegfried and Hagen wants to steal it and throw it in the Rhine.

Lots of time passes and she marries Etzel (Atilla) the Hun. More time passes and she has him invite her brothers to a feast. There’s some back and forth tension between everyone (like Hagen brazenly walking around with Siegfried’s sword that he stole after murdering him, even though he was a guest so shouldn’t have kept his weapons with him anyway + outright admitting to the murder) so Kriemhild gets Etzal’s brother to attack the Burgundians. Hagen retaliates by killing Ortlieb (Kriemhild + Etzal’s son). Fighting breaks out and Kriemhild demands Gunther turn over Hagen. He refuses so she sets the hall on fire. Gunther and Hagen are the last two left alive, and Kriemhild asks where what he stole from her is. He won’t tell her as long as Gunther is alive, so she kills him. Hagen says it’s in the Rhine, so then Kriemhild kills him with Siegfried’s sword. She’s then killed for having the audacity to murder someone like that (he was a guest after all even if just a terrible one).

I wonder if she has some lines for Altera

Ah, I remember that version. Bryn somehow keeps super human strength, and Gunnar is unable to consume the marriage. Every night he tries, she beats him and he passes the night hanging upside down by a rope

He has to call Siegfried with an invisibility cloak to help

This version also has a lot of subtext and symbolism: specially Norse laws were different, and women could inherit and rule, and if a widow, even choose whether to marry again or not. Though she was often pressured to do so.

That scene also meant that while an unmarried queen, she had the full power and authority in her court, a power she loses when she marries and it’s transferred to the king.

I also want to say how perfect Kriem’s Bond 10 CE actually is.

The myth, even with different versions, essentially tell about the major problems and questions of the day the Norse/German people were often faced with:

All points the Volsunga version kinda missed when inventing magical potions and such for some sort of tragic love story.

In the older versions, Sigurd/Siegfried willingly drops Bryn without needing any magical potion when he meets Gudrún/Kriemhild. He did find Bryn likeable… but even though he gained renown with the dragon slaying, he’s still landless and titleless… a problem solved by marrying Gudrún/Kriem, daughter of the king, who provides him those as the dowry.

Bryn herself, more evidenced in the German version, also didn’t exactly love who Sigurd/Siegfried was more than WHAT he was - social position and wealth. She has been mostly fine with Gunnar/Gunther until she finds out Sigurd was the higher rank guy.

Gunnar betrays his blood oath more for the gold Sigurd had than because of Bryn’s accusations, Atli refuses to support Bryn to divorce Gunnar, and uses her death to invade for the gold.

Basically everyone in the story is a deeply flawed person bordering on unlikeable. Each of them is the architect of their own fate.
The Volsunga version kinda breaks this by inventing the magical potion plot device, which makes Sigurd and Bryn “innocent and tragic” on the whole thing, deceiving without meaning, which I believe was an intention, in modern terms, to make them “sympathetic and likeable to the audience”, specially since it was written like, half a millenia after the older versions.

Which is why her Bond 10 CE name and art are so perfect.

Fafnir kills his father for his inheritance (the gold hoard) and is punished by being turned into a dragon (at that time dragons were giant snakes).
Kriem’s mother loses all her children by scheming to have Sigurd’s power and new wealth in her court, Gunnar dies without heirs breaking his blood oath to Sigurd for the gold, Sigurd, his son and daughter die, Atli’s entire lineage also die after he invades for the gold, and Kriemhild herself on 3 different marriages loses every children too, including ones she herself kills, directly on indirectly.

Basically everyone schemes, betrays, fights and kills for the dragon’s gold hoard - and everyone dies in doing so, essentially having no use for anyone. It really didn’t matter.

It’s even more fitting that the only person initially involved in the whole thing that lives (at least in the versions she lives) is Kriemhild, the one that least cared about the gold in the whole story but can’t escape its curse anyways.

Which is why the name and art is so good. Take the flavorful name for the skills, and how everything knits so well together, and I got my first target for 2024.

She is apparently voiced by Koga Aoi

I have moral issue with her
in one hand she’s from German/Norse mythology → I should roll NP5 minimum
in the other, her story → I should skip her as I’m the biggest SigurdxBryn simp around

Someone make the edit with Kriemhild, please I really hope she gets an interlude in the future to dive deep into this and her relationship with Siegfried.

She also voices that annoying mascot from Genshin, her range is crazy

I think I’ve found a new servant to schill for