love how its not even 2 turns. Well atleast he got 20-30 battery so can be plugsuited to frontline to save the team then hopefully die with his taunt skill next turn to give his star regen and crit damage buff to other fronliners

If his defense buffs don’t last longer than 1 turn than it really hurts his ability to act as a tank. He either has to really focus on repeatedly activating is NP to act as any kind of defensive support or be regulated as a semi-support which rider is not really the best class to be. Reines is the only one that sees use and that’s because she has a 50 percent battery.

The sad part is that if my math is right, she is still a bigger damage amp for Romulus than Constantine.

She also affects NP damage more, and he has 2 Arts cards.

As for Constantine, not quite hitting the mark as a tank, sacririce or ROMA semi-support but I’m glad he’s not a generic looper.

Buster type support NP but with the Nightingale approach to survival. Mmm. Different at least.

This is the FGO equivalent of “he has a nice personality,” but yes, at least he is different.

6.5 happening in June with Constantine

As we guessed, he’s the shadow on the left side. Anyway, I see a Saber. Would’ve guessed him as a Rider or Ruler, oh well.

They went with the best class for him profile-wise.

I wonder if there’s a Iskander buff on its way because of the appearance of another Buster rider…on a horse.

It would be nice if his cards were better, as is… lukewarm crit with short term tanking.

You certainly have a high standard for your men.

He never said he wasn’t rolling

True. I don’t think his gameplay is enough to interest me, though, unless other changes come that help him play a more important role in more parties. It’s unfortunate when you have candy for Roman allies and can’t even make a compelling case for buddying up with the ultimate Roman himself.

As a Crit DPS, he feels like trying to do Himiko + Castoria by himself, with weaker damage and inv. As a solo he could be really good, but on a team i’d stick with other Crit DPS like Himiko, Van Gogh and Super Orion while leaving the survivability to the supports.

Although not his best power, the Gong arrow was the most interesting thing he can do ngl.

He’s a junk arrow if you want to use him for that as he gives no team charge or gen up other than the on death effect.

His total buffs to Gong are 20 atk and 30 charge. Star bomb and crit are whatever as Gong facecards are flimsy and have meh generation stats.

I would say he’ll get an interlude soon to somehow make him better than existing options, but I’m skeptical. If they wanted him to die outside Chen Gong seems like they should have given more attack, less HP, and more taunt.

Cool FA pose, but it could use more color. If it weren’t for the flourish at the bottom of his outfit I’d have trouble telling where he ends and his horse begins

You mean he isn’t graphed directly into the horse’s back? (honestly that little color flair barely helps distinguish rider from ride)

If only his taunt last for 3 turns instead of 1 and he has a guts, he will be truly an SSR Georgios and much more viable tank

He kinda strikes me as a Buster-flavoured take on Jinako, but by and large he’s just far too restrained. 1-turn effects just aren’t useful enough, no matter how powerful they are, but especially on someone who can’t even contribute much to the turn he gets Gonged.

He is definitely a mixed bag that fills a number of roles, but what surprised me is that he seems to be decent as a solo servant as well, acting like a more offensive oriented version of Qin Shi Huang. 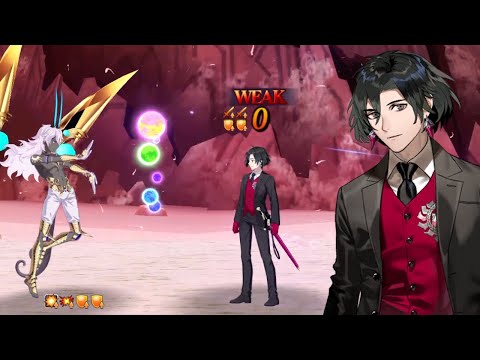 I could see him being very useful in less developed or smaller rosters, where his durability and offensive buffs would see him fielded in a lot of instances. For more mature of heavily developed rosters, I could see him filling a niche in the rare Caster/Pretender CQ for a stall team, or just for someone who wants to relive the days of double Memelin.

Vying for the top on no kit cohesion. NP Gain + taunt is a low-key favorite of mine, but the effects should have been longer over a starbomb in what feels like the wrong spot.

Buster + Attack is a good combo if he had any other team steroids. The Crit up for Romans on it feels unnecessary and pointless to build a team around, just there to justify the lengthened CD I guess. If it hits great, but leveraging it seems pointless in the face of better options.

The on-death skill is fantastic for flavor, casts buffs on himself that pass on if he dies, but too much here so the values suck. Scrap the crit damage, pump the stars and battery instead to make it worth trying to get him killed. As is the value on this skill is non-existent since the battery makes you want to NP and his NP means he’s effectively immune for 1 of those 3 turns. Like the second skill if he can pass it on great, but pointless to build around.

I really don’t understand the NP. What’s the point of having over 100% def up? Unless I forgot how def up works, 100% is basically invincibility already, unless the enemy has pierce defense. And what’s the point of invincibility and damage cut if you already have def up? In case you’re fighting an enemy that can pierce def but not invul or the other way around? Wouldn’t you just bring a support who can provide more constant invul or def up in that case then? And the effects are all 1 turn so won’t they get wasted?