Watch at 2x Speed is recommended.

Anastasia has fairly middling hitcounts but she’s a Caster who acts three times per turn, with NP gain CE she just reached the threshold to reliably stack Asterios NP if she spends all moves on attacking (i.e. don’t use skills).

Then in an ideal scenario, Asterios should be able to solo without losing a drop of blood. Hence the L20 Asterios: with so little stat he could easily die in any turn where he could not reach debuff threshold, and the solo became even longer meaning more chances for things to go wrong.

This results in a gruelling 60 turn solo where every turn is a battle against RNG—for Anastasia to behave and charge Asterios back to 100%, and for Asterios’ attack debuff to not be blocked. If you wonder why Anastasia seemed so cooperative in the video, it is because every timeline where she did something to ruin the solo was pruned, just like her Lostbelt.

Anything you find strange like brave chain used or not using skill 1 can be attributed to a means of dealing with RNG.

Might bring my Asterios to this battle then, would be interesting. Don’t think I want to go full stall though, so might bring some others to back him up. Kinda tempting to do a solo since mine has fully maxed skills though, get him to earn a grail that I’ll probably use on him to get him to level 70.

It might be harder with others; I remember trying to use him a couple of times and he is so fragile without his NP effects that he didn’t last long even with a great supporting cast.

Though this was also a NeroFest CQ or something…

Shut the servers down, peak FGO has been achieved.

(Still waiting on a full level 1 team clear of something. It works in Pokemon.)

How long was the full footage?

How long was the full footage? 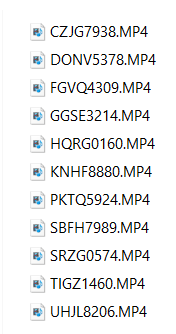 These files made up the video, each file has about 10-20 seconds cut out before they were joined up for the video (loading screen after reset&the turn that got pruned). There’s a few more recordings that were straight up deleted because the reset did not work.

I estimate the actual time (including all the resets) taken to be around 1.5 hours for finishing the entire run.

I believe there’s a video of a level 1 Mash battling boss Gorgon from Babylonia.

Just watched it but I don’t think it counts. That was a timed battle where they just had to stall for 15 turns. Would’ve died to curse long before they killed Gorgon otherwise. I did find one of the first Gorgon fight vs. level 1 double Asterios and Romulus and level 1 Medusa solo of Consort Yu.

Sorry L11, I have to retract my previous statement. The level 1 Medusa solo was, in fact, peak FGO.

The level 1 Medusa solo was, in fact, peak FGO.

Hey a game can have many peaks!

I saw that one before, that person definitely have patience but due to the mechanics of that stage any level 1 could solo it with no need for strategies or resets as long as they have that command code

I didn’t realize Asteroid could even solo Anastasia lol. Although I did use him in my front lines against Ivan and Anastasia. I hope they do Memorial Battles for this Lostbelt too. I have some strategies I regret not trying out. “And yet strangely titillating…”