Our 3* unit (remember when those were free upon completion of the chapter?) for our new Lostbelt is Mandricardo, the Saracen king of the Mongols by an Italian poet in a work set in France. Confused? Well, as least he isn’t genderbent to boot.

Now, he is being added to the general pool, but before you start spamming that FP gacha remember that they’re normally not added until their debut banner ends. So you’ve got a little bit of time.

S1 plays, to me, a little strangely. It’s a selfish Defense buff (30% for 3 turns) and a party-wide Charisma (20%). I’m very glad that base Charisma skills are mostly gone by the wayside, but the addition of a survival tool for someone not long for this world is strange. Oh well.

S2 is the reason why I don’t care for his Defense buff - it’s a selfish buff that only activates if his HP is below 50% (so you don’t want defense buffs - then S2 won’t work). It also causes him to die after 1 turn (so you don’t want defense buffs - he self-Arash’s anyway). If you’re able to use the skill though, it’s a good one. For 1 attack on that 1 turn, he has a 50% Attack boost, a 100% Crit damage boost, and removes enemy defense buffs when attacking. This is great for an NP-led, crit-fueled brave chain to delete a break bar and let your main DPS swap in without using plugsuit.

S3 pairs a 20%/3-turn boost to his Quick and Arts cards with a 1-turn taunt. If I’m being generous, you use this skill and his defense buff to keep him alive while also hopefully taking just enough damage to use his S2, but

Because he seems geared to die, I’d rather a full 50% mana burst instead of a 3-turn smaller dual color buff but again I’m not in charge of kit design.

He needs Dust, Chains, Horseshoes, and Medals for his Ascension mats. He further takes Chains, Dust, Horns, and Crowns (a new Silver-tier mat) for his skills.

Verdict:
All of his skills boost his damage, so they’re all fairly valuable to him. I’d for sure raise s2 first, then s3, then s1 last. Skipping Lores and leaving any of them at lvl 9 is probably fine and won’t cause you to miss out on much.

NP:
His NP is a ST Arts one that, again, is meant for 1 turn of burst damage in a Brave chain. It pre-buffs his decks (20% for Arts/Quick/Buster, depending on OC), deals damage, and then lowers his Attack for 1 turn by 10%

so that would hurt him a bit on further damage but hopefully it’s offset by his Charisma and S2.

It does from 27k —> 45k damage, neutral, and then 38k —>64k @NP5 if you have his s2 active. At the high end, that puts him on equal footing as an NP3 Quetz or non-Male riding NP3 Medb, well over NP5 welfares Ryouma or CinderEli (just as a partial list) and completely outclasses Ushiwakamaru and…uh George? Those are the only 2 ST 3* and below Riders? We need more of them.

Mandricardo has a good bit of burst damage, and a good-for-his-rarity amount of regular damage if you want to keep him on the field for a long time and pretend his S2 doesn’t exist. He’s not due for any buffs in the next 2 years and doesn’t have any of the traits that would allow some future supports (not Chaotic or Evil, not a Existence Outside the Domain) but he looks very solid to me anyway.

Final word
If he’s anything like William Tell, I’m going to be rolling the FP gacha for months and months without anything until I get 30 copies summoning on a regular banner bc the FP gacha is unreliable at best. Save those FPs for Nobukatsu now

As was pointed out to me by @vii575 , I misread how his s2 works. It doesn’t kill him after that turn, it kills him after the next attack. So if you used it for his NP, he dies at the end of it and couldn’t continue a brave chain. If you gave him Guts, he’d survive, but then would die on the next attack in that same turn as well. 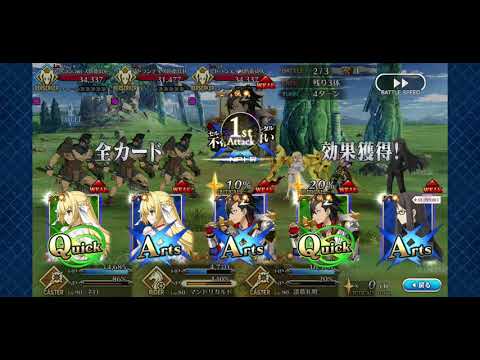 I think he’s oddly adorable and will collect him happily even if I rarely ever use him. There’s always a remote possibility that his s2 becomes more useful either with a strengthening or with some new mechanic in the far future.

and what does it say about me if I end up liking all the suicidal bois?

This is great for an NP-led, crit-fueled brave chain to delete a break bar

Actually he will die after use NP if you do this, that NP count as 1 attack

Did I misread? It says “when attacking for 1 turn” so I assumed that meant he died at the end of that turn.

Oh, that’s my mistake then for misreading.

That lowers him a bit in my mind, a 100% crit damage buff on a 3* isn’t going to be as good as an NP would be, so if you can’t get the boost from the NP OC effect first + get 2 cards in for face damage I want to use him even less

His kit is quite solid, if a bit generic, and from what I’ve seen his gain is deceptively strong.

Thankfully he is general pool, have to save for now so won’t be getting him for a while.

The defense boost on the first skill would help him live long enough to get an NP off if you aren’t using starting gauge CEs or gauge support.

I feel his overall kit has a goal, use him then Arash him. But instead of hyper focusing down on that final burst they give him a little bit of the tools he needs to reach that burst on his own, at the sacrifice of a relatively smaller burst, in case you are newer and don’t have the outside tools to help him reach it quicker.

I disagree with a lot of this review.

I think that what you’re doing here is making the same mistake people make when they look at, say, Chiyome’s kit: focusing on the gimmick/flavor.

The defense buff is there, with the taunt, to help Mandricardo safely get to that 50% threshold. It helps him survive against crits that would otherwise take him out. The defense buffs and healing you get from the Waver/Tamamo shell (or both, if using Bride) do the same.

Does he suffer from losing an entire skill? Does he suffer because his other two skills essentially amount to general performance boosters? Yes and no. Mandricardo’s game plan is all about looping his ST Arts NP with easy crit access and good internals. The S2 isn’t the centerpiece of the kit—the NP recursion is.

The S2 is maybe too much flavor, but that’s all it is. It’s nice when it matters and it gives you an extra tool to work with, but it’s not important in the grand scheme of how he works.

Also, HP thresholds like this on a skill on an Arts servant with Morph screams USE BLACK GRAIL. The demerit helps him safely get into that threshold even as you stack Waver/Morph defense buffs and use Tamamo/Hans/Castoria for heals/dodges. The taunt helps make him a little more consistent.

I’d for sure raise s2 first,

Also, you’re not gonna be pulling out the S2 often unless you want Mandricardo to switch into someone else. This means: (1) you have a generalist like Bride or the next DPS for the next phase of the fight in the 4th slot, or (2) you have plugsuit ready to go. So in terms of leveling priority, the S2 is the lowest.

Lore his S1 and S3 because Mandricardo needs the reduced cooldowns to reduce his buff downtime. Playtesting him in the story, I haven’t really fit in many Tamamo NPs (tho I’m running 4060 instead of Prisma Cosmos), but when we get Castoria that might change.

and then lowers his Attack for 1 turn by 10%

so that would hurt him a bit on further damage but hopefully it’s offset by his Charisma and S2.

His damage still comes out ahead, and yes, since ATK buffs are additive, this is offset by any charisma.

a good-for-his-rarity amount of regular damage

No, his card damage sucks. Riders have low stats (his Atk is barely better than Robin Hood, who has notoriously low ATK due to his NP, and Mandricardo loses a lot of HP in exchange) and Mandricardo favors Arts/Quick and has no native crit buff outside his S2’s single hit. His NP damage is great because he has high steroids (especially for a 3*) but his card damage is pretty low.

Kinda a Chiyome/Robin problem too where there’s good NP recursion but outside of the NP, you’re a wet noodle.

yeah, he’s pretty nice to have but i doubt i’ll be using him too much tbh

No, his card damage sucks

For this part, I meant his regular NP damage, not his card damage. He compares well to say the Lancer Cus and they’ve had NP buffs. More than Billy and he’s had an NP buff.

You’re more than free to disagree with my wanting to focus on his S2. Personally though, I hate when servants only have 2 skills. Salome basically has 2 skills and she’s much weaker for it - I’ve managed to make her 3rd work, but it isn’t easy. It takes away from her that it is normally dead weight.

I had misread the death thing as proc’ing when “normal attacking” but it’s actually better if NP works as well (removing the RNG need for the additional facecard).
I imagine a guts+Gong combo on W1 will guarantee Mandricardo’s S2 usage during W2 (assuming it’s a wave that requires an ST instead of AoE). Doesn’t seem like an everyday setup but I’m also completely ignorant of most FQs’ layouts ^^

Other than that (and the rare “turn 1 enemy ST NP”), I have a hard time figuring out ways to use his kit with similarly precise timings.

Yeah, that’s why the S2 is a gimmick you can safely ignore 99% of the time.

Different takes hahaha.
S2’s death is clearly going to be 99.9% of my use cases (ST Damage + remove-def-buffs + free order change)
But said usage seems really hard to pull off in a CE-restricted environment.

Him needing to be below 50% makes it quite awkward to use.

Hence the guts+Gong combo to easily down his life on the previous turn. (still not saying this will used often

If anything, I think that like Paracelsus + using his taunt to eat an NP is the way to go

That’s how I’ve been using him for max utility plus loops so I guess I’m doing something right?