Apparently one ice skater wasn’t enough, and so we have not only da Vinci (Rider) but Melt has taken to the rink as well with the help of an army of adorable penguins.

She also chased after the Arts AoE meta, following the recent footsteps of that same da Vinci and Musashi. Now, is the third time the charm or does lightning not strike thrice?

S1 is an Arts buff with over 100% uptime, lasting for 5 turns and having 4 turns of CD at max level. It’s allowed that freedom because it isn’t a huge value - only 20% - but you’ll manage 40% every once in a while…or more often if you have a Tamamo or two.

S2 is a paired Invincibility with a buff that blocks her buffs from being removed, so niche gameplay for bosses/CQs/wild Amakusas or Ibarakis. It also changes the field to (Waterside) for 3 turns. She’s not a support for like Jeanne Archer/Martha Ruler/Nero Ruler, but it helps herself.

S3 is a NP drain that drains from your allies

Talk about a needy celebrity. It charges her own gauge by the amount drained, so this is potentially aa 60% battery, taking 30% from each of the other Servants. It increases her star gather for 1 turn and then her attack for 1 turn by 50%. This makes like Waver a better support potentially than Tamamo, since two Wavers means 40% team batteries that she can take from instead of Tamamo providing nothing (I’d probably still take Tamamo for the Arts and NP damage buffs myself).

Those aren’t the easiest mats, with Frost/Steels/Eggs locked to the Lostbelts.

Verdict:
I’m not a huge fan of her S2, not because it’s bad, but because I’d mostly use her for farming and so it isn’t a useful effect. S1 is good because you can make it permanent, but S3 packs a larger buff for that 1 turn

NP:
Her NP is AoE Arts with a couple of nice effects - on (Waterside) fields, it’ll remove Evasion buffs. This is a small thing because of wave clearing + Invincibility buffs existing, but it’s something since she can make the field (Waterside) instead of having to hope like Martha or Jeanne. It ignores DEF, again a niche effect. And finally it gives Stars based on OC, which can be nice on wave 2 to set up her Mana Burst and star gather on wave 3 where they have more HP.

It’s not bad for damage, hitting for more than her only Arts AoE competitor Fionn on burst turns with her S3, even though he’s had an Interlude and a few RUQs (and he also has a burst turn damage buff on his S3). 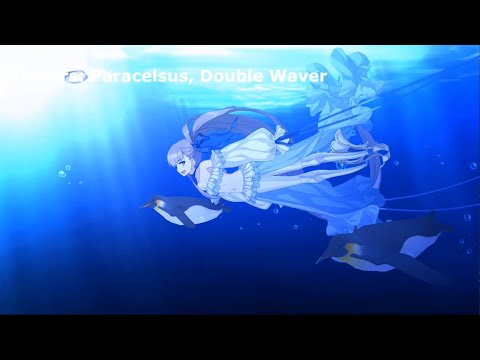 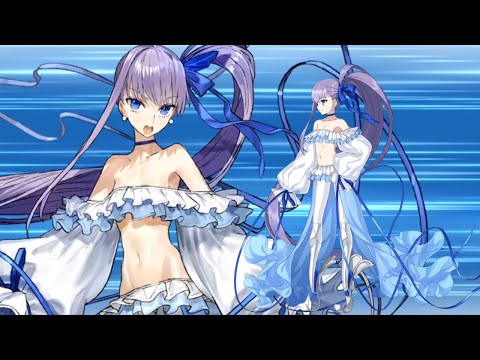 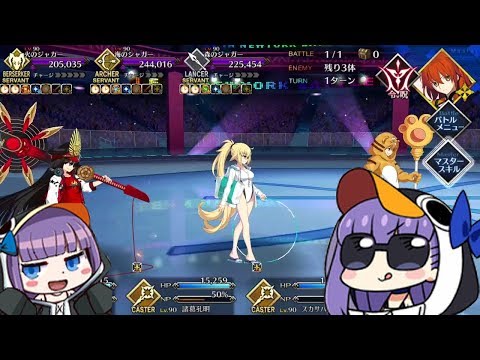 Waver/Skadi/Paracelsus looping that annoying Jaguarman CQ from last Gilfest (where they would gain massive card resistance based on who was last hit and stuff, I hated it). Also has Lanling and Tamamo bc this is a CQ so the enemies just have break bars and can still act to kill people off. 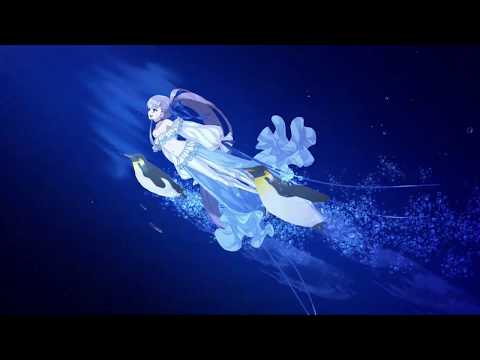 Tamamo/Bride/Paracelsus without Scope but with MLB Magical Girl 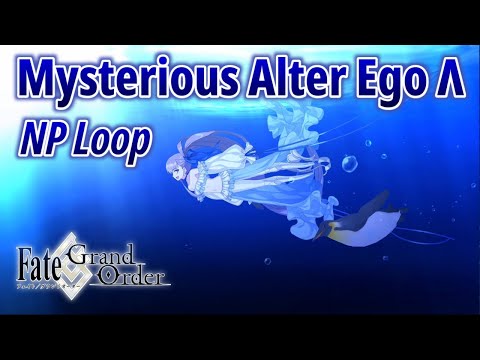 So yes, she can obviously loop with quite a few options. None of those even showed Asclepius and he’s normally pretty good for that as well, especially at higher NP levels where you don’t need as many damage buffs.

She’s not as omniuseful as Musashi or Space Ishtar will be, and doesn’t help the team NP like da Vinci. But she’s pretty good. In about a year and a half we’ll get Vritra, and I’d still say Melt’s a good option. Erice is free as a welfare next year, but won’t loop because of Instant Death. And then Percival in almost exactly 2 years if you’re into himbos. She’s better than Bunnytoria though so if you’re pulling for that banner this is a nice pickup to get along the way. Fuck I wish I had Waver. One of the few times Skadi can’t stand in for him.

The discussion thread I’ve been most anticipating is here! Glad to be able to just talk about Lancer Melt in the right place for it.

Her skills are interesting. I kind of love how very ‘Melt’ that third skill is. And the second while not a farming skill is pretty interesting and gives her a wider space for use beyond pure farming. One of those gameplay/lore skills that actually isn’t a bad thing and doesn’t hurt her. Of course no questions on which skills to maximize…all of them is my answer! I didn’t spend days farming eggs to not max her skills out Day 1.

She’s definitely one of my top targets for this year. May not be as universally useful as you noted. But I think she’ll get the job done (especially depending on NP levels, giving her all my grails, etc). She’ll be plenty solid this year for doing what she’s there to do. And when Castoria shows up she’s free to just do whatever. Until then I’ll gladly experiment to find the right mix with Tamamo, Waver, Nero Bride, etc.

Honestly I love the design too. The whole figure skating celebrity direction works wonders. The leviathan (penguin) outfit to start is pretty perfect anyways. No wonder it got her final ascension art. But her actual stage outfits are just beautiful. Hopefully can get enough copies to boost her np as high as I can and just unleash her on the world.

Also I will admit…kind of want to see Nero Ruler be a thing. Come on Christmas Ruler Nero!

Melt’s 1st skill feels a bit weird on her, but it is a type of skill that I wish the game experimented more with. Melt’s most general use is for 3 turn farming, and I don’t really see her being used in more prolonged battles where she could really take advantage of being able to double up on her 1st skill.

Recently there’s been more experimentation with Skill Cooldown reduction which would work perfectly with this type of skill.

My final priority target of the year.

I like this Melt a great deal since it’s a nice callback to her more cruel, vicious side as an Alter Ego while not entirely relapsing into sociopathy. Her game play utility is a nice, but welcome bonus.

In all seriousness though, Melt is definitely the highlight of this summer for me. I already loved her character, but then the design choices and her animations and her skill set… they just keep packing it on. She’s one of the last Servants with a kit design I really like, as opposed to one I’m begrudgingly prepared to go along with in the name of optimisation. The more-than-permanent Arts buff, an emergency button which can also indirectly strip Evades when needed and that beautifully selfish third skill, perfectly perched to make use of her NP starbomb. Loves it, just a sexy kit, aesthetically speaking.

She’s a fabulous character and a useful one, too. I like that her flavor is very much like OG Melt.

Being packaged with Bunny Ruler is a huge downside for me, but I’d happily grab her along with a different SSR. Musashi, Carmilla, and Okki ate my poor life choices SQ already.

I do like where they take her personality. There’s no doubt the sadistic side of her is stronger than we saw in the CCC event. But it’s still Melt at the end of the day and the one we’ve grown to know. She leans further to that side, but I don’t think it goes too far. You still get moments like this:

I also kind of appreciate that they give fans of the character moments like this in the story. There is actually a nice connection between Melt and the MC. Which isn’t even interfered with by the presence of the classic blocking of Mash.

Isn’t always the case where good gameplay intersects with an alluring character. But it happened to work out here.

D,- she looks like she is wearing the pirate shirt from Seinfeld

It was a puffy shirt!
I don’t wanna be a pirate.

I’ve been waiting for the banner to come out mainly because of her, and partially due to Okita Jet.

First off is the outfit/theme, since that’s the main reason I’m wanting to summon her. The penguin suit is quality, and she will be wearing that all the time if I get her. Using penguins to fight is as entertaining as Jeanne using dolphins to fight, a fun concept. Second ascension is fine, but no way it tops the penguin suit. The rest of the art is a bit sketchy in the ways that Melt was designed to be sketchy conceptually, but at least in this case there’s other outfits to pick.

Going into the skills, it’s nice to get a passive card bonus with that skill 1. Skill 3 will be a bit of a pain, but if carefully timed hopefully it won’t be too annoying.

Well, she isn’t a direct support, but I still fully intend to pair her with some of them to see if she works decently alongside any of them because those waterside bonuses are nice. Also pretty sure you mean Nero Saber.

I see a lot of potential with Lamba + Jarcher - the waterside buff will go a long way, since it procs both her crit buff and her 3% gauge per turn passive, and they both have pretty good personal star engines and refund, both to keep them both going and for Melt to steal when she draws a good hand. 3rd slot would probably have to go to either Casgil or Bride, but either one of those can hold a starting charge CE or a Prisma, depending on whether you intend for the battle to go long enough for Melt to use her S3 multiple times or not. It’s no DCS looping, but it’s a tasty setup when minturning isn’t the primary focus. Personally you’d have better luck with the cute penguin pictures than with Melt herself, but unless I get ridiculous summons I’m not likely to NP5 her whether I wanted to or not.

I want at least one Melt copy because I like the character but I’m not so sure if I should try for NP2+… I mean, I already have NP4 Fionn and for irregular arts looping I will go all in for Space Ishtar so… yeah.

Anyway, I fear the bunny in her banner. I can see the same no MHXX but 3 BBs happening again…

I know what you mean. If remotely possible I’d love to NP5 her and just unleash that awesome NP on repeat for years to come. But you just never know with the gacha. Seeing her that happy though definitely creates a wish to summon her as much as I can.

As of Daji’s release, Spishtar is the gold standard for AoE lopping because she works great for both DCS (in a year) and DKS (2 years from now). But Spishtar isn’t Melt + Penguins, so… I’m still pulling for her!

Easy. That elation is due to extreme sadistic pleasure at an evil plot (currently) going her way.