GP official review for him.

We have our final new Servant for GudaGuda Final, a (Limited) 3* Berserker with a bad temper. Limited 3*s are bad civ, but does Mori’s skillset make him good civ anyway?

His S1 packs a massive 100% crit damage boost for 3 turns - not only is 100% already a large get, but the few that have that much don’t have it for 3 turns. It also increases his debuff resistance by 100% for 3 turns, so he’ll be basically immune to them…but then it applies a “buff” of a 500% chance to decrease his own buff success rate by 100% for 3 turns as well. Now, it says “own” but I’m 99% sure this actually applies to other allies targeting Mori - so if you used his S1 and then tried to hit him with some

it’d still fail even though it’s from someone else. And 500% is too large a hill to climb with buff success rate skills like say Lanling or Bai. A powerful skill but one that limits him immensely.

S2 gives him an on-attack buff for 3 attacks/3 turns - each hit will increase his attack by 15% for 3 turns at max. So if you used a brave chain on the first turn of this, it’d give him a 3 turn 45% attack buff. Not bad. It comes with a demerit, bc ofc it does, of lowering his defense by 10% for 3 turns as well.
*Note that with this skill, if it’s used before his S1, it will continue to give him the Attack buff. I think the Def debuff is also at 500% so his 100% debuff resistance from his S1 won’t prevent it?
*Also GP says it’s for 3 attacks/5 turns, whichever comes first, and the fandom wiki says 3 attacks/3 turns. That really shouldn’t make a difference but on some extreme cases you’d miss using 3 of his cards in 3 turns.

S3 is a 1-turn crit star absorb at a high enough percentage to fix being a Berserker, and then if he’s killed it gives him a flat star bomb of 20 turns for the next turn. A little parting gift for the team, I guess, and helpful since with his being a Berserker with low HP/having a defense debuff/not really being able to benefit from team def buffs, he’ll die pretty easily.

For Ascension, he’s old school. He takes Proofs/Bones/Crystals/Claws. His Skill mats take up a few newer-adjacent mats - Bones, Proofs, Magatamas, Wine. Magatamas and Wine have been out for a little while but are still locked to EoR farming so it isn’t absolutely beginner friendly.

I’d probably mostly skip his S3 if I was looking to save mats - the stars-on-death is a flat amount, and even @lvl 1 the weight buff should be more than enough to raise him over your Caster supports (should put him at 270? Base of 9 so 3000% of that). The fat crit damage buff from his S1 is something you’ll want, but even his S2 could be skipped a little - lvl 1 would give him 30% Attack for 3 turns, lvl 6 would give him 37.5, and a full Lore gives him 45%.

NP:
His NP is a ST Buster that may ignore Invincibility (his S1 demerit could mean this is blocked if you used his S1 first). It then ignores Defense buffs and as an OC effect it reduces defense for 3 turns, albeit at a small amount of 10% @ OC1.

One more thing to note about Mori is his deck - it’s not BBBAQ like you might expect, but for some reason it’s BBAAQ. That means he can’t fully benefit from a turn of Hero Creation + his S3 + S2 + S1 to just got wild for a turn of absolutely bonkers damage. He could still NPBB brave chain, sure, but we know how deadly crits can be and how they can do so much more damage than NPs in the right setup.

If you get Summer Nobu rolling the banner, she’s better than he is. Arjuna Alter exists, and he’s better. Summer JAlter was free and won’t crit as hard but is otherwise better. He’s just a nice little extra to have, I guess?

And I’d say Merlin is the best pick for Mori still, as he is for everyone, but make sure you’ve got a gameplan for how you want those first few turns to go and then slot your replacement DPS in for when Mori dies, since he won’t be around long and that’s a good thing. Taunt CEs could be nice on him - say you put him with Poster Girl, and then double Merlins with star bomb CEs like Carp or the one from last Christmas - he comes in, you flood the field with stars, you buff him to high heaven and hope for face cards, kill the first bar, he gets killed, he star bombs, and your actual DPS comes in to finish the fight with your filthy double Merlins of doom. I don’t see a reason to build a team around taunters like d’Eon/Mash/Leo/George to try to keep Mori on the field.

Baby forum discussion from 2 years ago with 9 posts. Really nothing to see there but for the curious.

Mori’s 1st skill does mean that other buffs applied to him by other allies or by Mystic Codes will fail unless they have a success chance higher than 100%. Luckily, we finally got the fix to Mystic Code skill that increased the success rate from 100% to 500% a few months ago so now Mori can benefit from buffs like the ATK buff on Plugsuit even with the 100% buff success rate demerit on his 1st skill.

Would just being higher than 100% make it work though?
Since the skill gives him a 500% chance of it failing?

After writing the above sentence I can see why some players might be confused because the word buff is being thrown around a lot and there’s a buff that affects buffs.

Just in case, here’s a gameplay video of Mori. Turn 1, Mori uses his 1st skill after receiving buffs from the other party members. Turn 2, the Evade skill from the Chaldea Mystic Code is used on Mori and it still works since it has a 500% chance to apply. 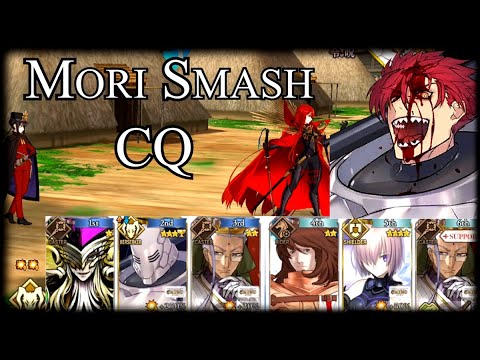 So they’re not good teammates for him but theoretically Bai/Lanling/Calamity Jane could get him to have some buffs.

Thanks for that clarification.

he’s serviceable for now.
really waiting for chen gong to drop to make him much better, although critzerkers aren’t exactly a rare niche if you count gold servants
i think the most notable point about him isnt actually crit, it’s the def ignore invul pierce np, basically unavoidable damage, and at low rarities that is a very unique point

if altjuna didn’t burn me so badly, I’d maybe try to get him, for chen gong memes

but as my stash stands currently, bleh Wow, I have none of these materials

Mori is useless to me, but he’s strangely adorable. Got two copies while rolling for a couple silver CEs.

A little thing to note if you want Mori for gameplay reasons and not just because you like him. He’s going to have competition in the form of Beowulf once his S3 is buffed. Mori will have stronger theoretical potential as a crit monster over 3 turns, but only if you’re actively flooding him with stars. For a less star-specific comp, You’re probably going to be alternating between a crit brave chain and then later into his NP. Beowulf has an upgraded NP (so NP2 = welfare modifiers) and he’ll have greater consistency with no drawbacks. Something to consider if you already have him. Granted, it’s going to be a good long while before this happens.

This thread is mostly talking about his gameplay, but this is my approach: He does have a good, if unusual kit, but if I see cool armor, I’m gonna try to get the character, that’s just how it goes.

Mori’s greatest asset is being able to let you pretend you’re playing Fate/Metal Alchemist if you keep him in base.

I for one find this a compelling reason to pull

Mori’s true best asset is being a clingy ginger hottie where Master is concerned. Indiscriminate violence has never been so cute.

He is pretty hot I have to say.

@Gou mmhhh yes. When you put it that way…lol

The only reason why I got him is because gong exist and i have superkscope.
I love those kind of strategy.