I am a fairly new player. I have an NP2 Beni enma. I use her either with a tamano or Jack the Ripper . Both are NP2 as well. Many sources say she has poor star absorption and poor NP generation. Her star absorption doesn’t seem too bad to me compared to many other servants. Normally, I use the following CEs on her :
See emptiness as the path (mostly this because it’s at level 35/100
Devilish Bodhistva
Mark on a smiling face

I also have kaleidoscope, seal designation enforcer , formal craft , Limiter over zero, black grail, victor of the moon, what lies beyond the horizon, heaven’s feel and before awakening.

What kind of CE would help her the most , both in a quick team setting and in an art team setting.
Thank you.

She’s not really that great in a quick based team imo, you’d be better served using lower rarity servants I think. For an arts based team. Mark of a smiling face with tamano (assuming you mean the caster version) and either a second arts dps or a lower rarity support such as hans, asclepius or paracelsus (assuming you don’t have any other rare supports besides tamano) would work pretty well imo. I don’t have a Beni or Tammu of my own though so I can’t say for certain what is the best

Nero Bride has a targetable NP gain and NP charge (battery) so she’s good too if you have/get/borrow her.

I tend to use mine with smiling face, but any arts orientated CE is a good choice. If you can get some good stargen going (Jack/Hans/Mozart/other supports and CEs) you could also use the summer event CE we get in this summer’s rerun which has both starting gauge, arts crit up and NP up, but that’s still a few months down the line

Thanks. I forgot to mention it but I also have a formal craft. Would it be better than smiling face? Thanks.

Kscope is solid if you have her 3rd skill at 10 to fire off her NP immediately, but it depends on the fight. Painting summer is certainly a good summer CE or demonic sun-princess. Holy night supper and golden sumo would be really nice if you had MLB copies, but not everyone does.

Any CE that gives her Arts up, NP up, and or starting charge is fine with her.

You can use her as a primary or secondary attacker, Tammy is obviously a good support for her, Hans works well if you want to gen stars, Mozart is good for 1 turn bursts, borrow a friend Waver until you get your own (if you want to of course), or just focus on getting Castoria.
I exclusively use her as a primary attacker so I can’t really help with the secondary stuff. 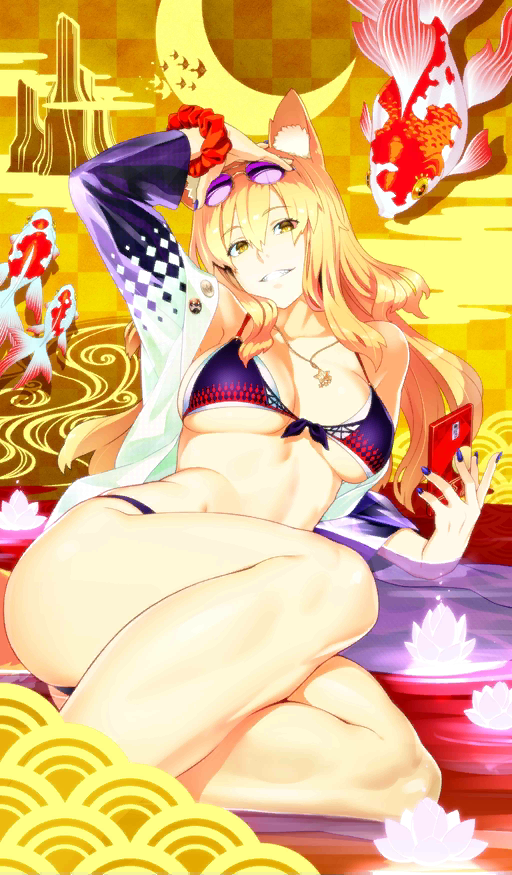 Is coming (again) during the Summer re-run, it’s a good enough fit for her (and it’s good in general).

I don’t recall ever having an issue with her star absorb but you can probably plug up the issue with some star absorb Command Codes (try to stick to 1 or 2 at max).

Star Gen on the other hand is a bit of an issue (at times), Hans can usually plug that up along with some star gen CC’s (it feels like she only really needs about 5-10 more stars to be a lot more consistent).

Her NP gain isn’t the best, though it’s not at all bad, just decent, (and her battery helps) but with the right support it’s basically a non-issue.

I’ve never used her in a Quick team before, but if you want to use her in a general Crit team, as I said earlier, Hans, Mozart, 2030 CE, Star Gen CC, maybe Cas Gil/Lanling.

TLDR
She’s fine with Tammy, Waver, and Castoria as supports (the usual suspects).

As for CE’s go for anything with starting charge, Arts/NP damage up, etc. (the Summer Re-run Event CE is a good fit) Mark on a Smiling Face is a great choice, as is Black Grail of course.