New PVP Ranking System is a MASSIVE nerf of time

So playing about 10 accts, I’ve got a fairly good feel of comparing ranking up.

Sure everyone can get to 9 now, but players with positive winning percentages have to spend way more time doing so.

Anyway at a glance the new system sounds like you can get farther, but especially because of “Wasted” wins, it takes much longer to do so.

Well wasted wins will not be that much (if you play all the time, if you only play to get to rank 7 or 8 then perhaps).

Wasted wins could be as high as 32 but not more… and that would mean that every time you need one more win with a new set you win all 5 fights.
If you play 1 round each day that would be 56 (days) * 5 (fights) = 280 fights then 32 would be about 11.5% maximum. But in most cases the number of wasted wins will be lmower then the maximum, and chances are that one plays more then 1 set a day on avarage.

So it is true you will have some wasted wins but in most cases the wasted number will not be that influencial at the end of the season.

I guess since it keeps people in rank 6 and 7 longer it stops accounts from waiting, waiting, waiting and breezing thru the prelim ranks. I’ve had several accounts do their first battles halfway thru masters and enter 7 at 2350 to 2375. Maxed Meta Pokemon with just 1 move. Sometimes the queque would be several minutes when rank 7 because it is looking for a player at an equal or greater projected point total.

My top two accounts have about 165 wins each, a third one has about 30 wins. I’m gonna get top 2 to 9. The other one to the minimum (7 I guess). I might be able to play 1 more that has about 15 wins right now, but really just that one in Ultra. I don’t wanna play stuff with just one move, I don’t think there is enough of an advantage just having a Melmetal SP/RS and 1 move Dialga+Gira-O since there will be real competition.

I’m interested to see where it spits people out at rank 9. Has anyone got there yet? If it’s putting people at say 2800 at rank 9 then I don’t think it’ll take longer at all to get to 10. It usually takes pretty much the whole season of playing to get there anyway for most players which is kind of the point.

Anyway at a glance the new system sounds like you can get farther, but especially because of “Wasted” wins, it takes much longer to do so.

Anyone who plays GBL on a regular basis will reach rank 9 because all you need is a certain amount of wins to get it. Rank 9 has become the new rank 7. Unless you reach 10 or really want rank 9, I don’t see much incentive to grind that much.

That’s not the point, its a huge nerf to me *10, but its an individual nerf to anyone.

My kids/friends don’t like PVP, so I like doing it, as I can do different teams for fun. Shrug.

Thats sort of my point. In Pure Grind sense anyone can reach 9, has hidden the fact that reaching 9 takes much longer then before

I’m interested to see where it spits people out at rank 9.

2787 initial rating, but he’s one of the top players and had a 64% win rate. (218/340) At the time, he didn’t play any other matches after getting to 9, so we don’t know how much we gain or lose for each battle. I want to see the ratings of non-leaderboard players. That’ll give us a better idea of what to expect.

Really it is just to cover their a’s when people see a tangible effect to losing battles bc of lag. Even people not getting it all the time can lose 1 or 2 battles in sets bc of it. I just faced a Vigoroth with a lot of vigor. 2 shields vs 2 shields against Electric Stunfisk. It should end with Vigoroth having 37 hp and no energy. My next pokemon Whimsicott should beat it before the first BS lands. Vigoroth also beat the Whimsicott despite delivering no fast move damage to it.

And if you don’t count the lag (Only saw like 1 match where it mattered), there’s: 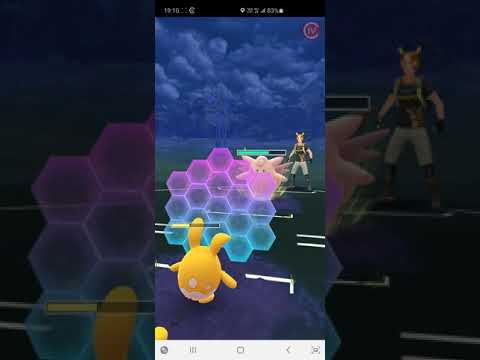 This is how I call “Deus Ex Machina.” Seriously it shouldn’t happen.

Also be warned that TPC and Niantic had been turned into a company that goes BEYOND the level of Bandai Namco. You have been warned. The callousness and vindictiveness against the Pokemon fanbase is nowhere, unheard.

If you brought Abomasnow in to finish off Clefable, they would have brought Registeel after that…then you’d have to switch Gunfisk in and immediately launch the EQ. They might have counter swapped Azu, but you need to make them perform difficult tasks. At least they didn’t have a fighter. However, in the end Aboma has the quick WB for a reason, and a Gunfisk (with energy) is more valuable and versatile to beat the unknown third pokemon

And if you don’t count the lag

Lag is the only( and frequent issue last times) thing, that holding GLB back.

If it isn’t mr boohoohoo I suck at the game but I blame others for it again. How come I beat all the rockets flawlessly but in GBL I somehow lose. There must be something wrong with the game because I am the best ever

On topic, yes, the better players usually just… skip rank 7-8. And now we play so many more games to get to 9. But I’m fine with it. It gives players that usually don’t get near rank 9 the opportunity to have access to the better rewards as well

I’ve had an alt account for most of the last 2 years and I can’t be bothered to play those all the time. 10 accounts? Really? But you complain about the new PvP system eating into your time? Are you by any chance playing people’s accounts for money?

So far I have 350 battles on my son’s; 325 battles on mine. 50 on my 3rd. Probably do same number of battles, not too bad bc it took this many seasons to build playable teams on my son’s. I’d rather just funnel more of the pvp benefits towards it.

I could do more on my acct, but its more fun to stick with a team say Mantee/DeoxysD/Alteria for a whole season and then see how I did with it compared to say a slightly tweaked team (Skarmory instead of Alteria) or a completely different team (Stunfisk Venusaur Azumeril). I could do the same thing by playing sets on my own more but then I’d have to track "Okay I’m 65/95 with Team1 55/95 with team 2* where this way I can just look at the total and let the game track for me. I typically dont change a team for a season, and its just more fun/easier.

Don’t misunderstand my purpose: Sure I get nerfed harder than others cause of change, but I play for fun and its fun so that’s not my issue.

My issue is that most people might not notice it takes 100-115 games to get to 7 vs 80-100 to get to 8. That’s quite a bit of a nerf. But its a nerf most won’t notice . I hate hidden game nerfs. If you typically get stuck this will let you progress farther, even if it takes more time.

Although I got to admit to 1 extreme Pet Peeve in this new system: Wasted Wins. It’s a stupid mechanic.
Obviously the game has our Win Total… it’s displayed in game… All they need to do is compare to that on the ranking system. Im wasting easily 5 wins probably more which is 20+ minutes of time because of stupid way they coded ranking

You do know the game was designed for one player only having one account to play? So complaining that you loose time (20 minutes on an 8 week season per account) because you want to play 10 accounts…

Even if you would have lost one set each time you needed to complete your level it would result in getting to rank 9 2 days later…
And since you have lot’s of time playing (seeing that you can play all those different accounts) and you know how to play you are probably well on your way to get to rank 9 before the end of the Great Battle League. That would give you ample time to reach rank 9 (or 10) in the other two leagues.

Try playing one account, and see if you still feel the same about “loosing time” and wasted wins because of the new way to rank up.

I could do more on my acct, but its more fun to stick with a team say Mantee/DeoxysD/Alteria for a whole season and then see how I did with it compared to say a slightly tweaked team (Skarmory instead of Alteria) or a completely different team (Stunfisk Venusaur Azumeril).

But it’s not really a ‘hidden’ nerf is it? They announced they will change the rating/elo system in upcoming seasons. If you look at it objectively - it makes more sense how it is right now. I mean, before, if you step into rank 7 at 2.700 ratings… you just skip rank 7 and 8 really. That doesn’t seem right