AoE Arts Rider is one of the rarest NP types in the game. We currently have 3: (JP has 1 more with Habetrot but that’s not important right now).

What makes him stand out? Well, his kit is about survival more than anything else. Normally his, but you don’t have to do that. S1 provides a team color buff for 3 turns, for both Quick and Arts cards. You target an ally with it, and then the other 2 party members get a Taunt applied for the next 3 turns. This can be used for helping out someone fragile - say a Quick or Arts 'Zerk like Vlad, Salome (who with her S3 can’t normally be buffed defensively, I love this for her

), MHXA, Angry Cat, Robo Horse, whoever. I’ll quote from the GP review for this as well:

Swapping out one of the focused Servants turns this into a proper 3-turn taunt on one Servant at a time, which is also a powerful effect for difficult fights.

So this is a powerful skill with some great potential, SO LONG as it isn’t a fight against one of those annoying AoE spamming enemies like giant demon boars or demon pillars. Poster Girl was a great CE because of the 3-turn taunt, and that’s what this skill is on demand.

S2 is much less interesting to me, and that only becomes more true as time goes on and we get Castoria’s batteries + every single servant that releases gets a battery it seems. It’s a 30% NP charge, a 1 turn star absorb (nice, but he’s a Rider without any other crit damage buffs so a) he doesn’t need help gathering stars and b) he doesn’t have a huge use for them). Then it’s a 5-turn Charm immunity on a 5-turn CD. So permanent, basically. There are certainly CQs and boss fights that rely on charms being thrown around, so it’s a nice thing to have but mostly you use this for NP looping.

S3 is him stealing from Achilles but also doing it better. It’s a 1-turn Invincibility; a 3-turn 30% Defense boost; and a 1-turn buff removal resist. Again, there are certainly CQs and boss fights that rely on stripping you of your buffs. I hated the Bull of Heaven so, so much. I will never stop being salty over it. But I feel like he’s clearly being geared for CQs with this kit - he has a lot of staying power, even with HP that’s right in the middle for his class and rarity.

Continuing his seeming bend toward challenging content, his NP has a pre-cast Defensive buff removal (so it’ll hit through Evades/Invincibles/Defense Buffs/Arts Resist Up/I’d assume NP Damage resists?) and a pre-cast NP Damage buff. Sadly, that’s just for 1 turn so it can’t snowball through looping. There’s no interlude for it at this point.

It deals more damage than da Vinci’s at any given NP level, usually by about 2k/enemy neutral. Mordred NP5 does only slightly more than Odysseus NP 1.

Yes he can loop. 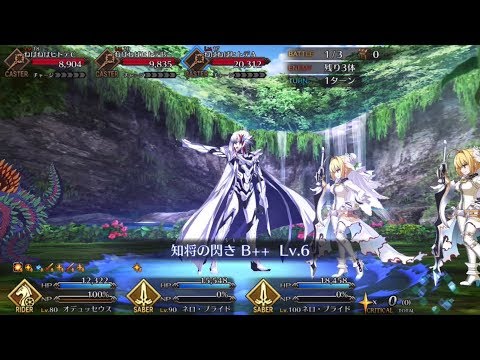 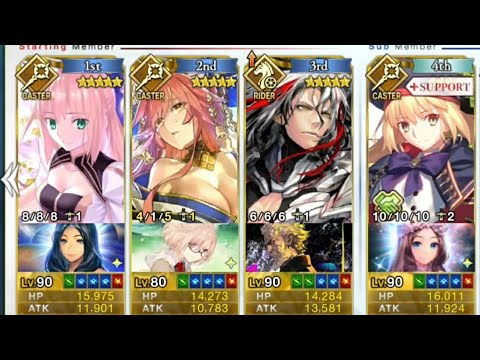 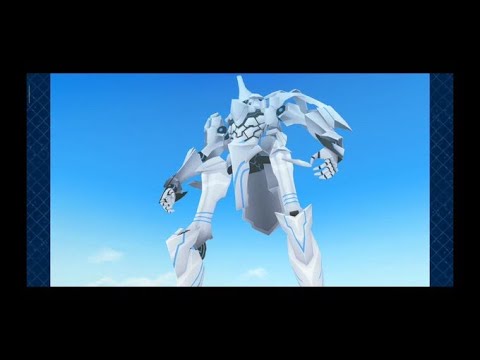 Mordred is much better as a pure NP spammer, so long as you can hit enough damage. She’s long been a standout for lotto farming since she doesn’t need a starting gauge CE to refund to 100%

da Vinci is better IMO for nodes that have a non-Caster enemy in the 3rd wave where you need a different DPS, and especially so if you’re short on self-charging options/care more about bond points than making things easier for yourself. For instance, I’m farming for Teardrops right now and it’s 2 waves of Casters followed by an almost 300k HP Archer boss. I’m able to use this team since da Vinci provides 50% charge for Bryn by the third wave.

So in general, if you need NP spam from everyone on the team, go with her. A da Vinci/Tamamo/Tamamo team will just keep on being a beautiful journey turn after turn after turn.

If you need someone to help a party member survive, with some NP spam, that’s where I’d call in Odysseus.

Thanks for the write-up!

I agree that Ody’s high-difficulty tools are where it’s at, though he is a workable Arts system attacker who deals decent NP damage and has nice face card gen stats.

The taunt has been fun to play with and is really a bargain in terms of party cost for what it can do. I even kept a lvl 1 esports copy for when he isn’t the main attacker.

Predicting an NP strengthening for him at some point since it’s hard for him to compete in daily content with the absurdly powerful Arts AoE roster, and he lacks Da Vinci’s impressive party charge capability.

Like Europa, he’s a really good and well-rounded Servant who rarely gets top billing. Thankfully for him, though, he is a Castoria-compatible farmer. He has more restrictions on 6-slot farming than Da Vinci and Mordred, but he’s not as potato as them. Da Vinci can compensate for her starchy performance by fluffing up Castoria NPs, but we don’t always want to watch 1-2 extra NP animations while farming.

I think Kiara does basically the same as him even when he has full class advantage. It’d be like 43k for her vs 45k for him?

Not even considering the neutral DPS options that can just equip a lvl 100 Black Grail and go wild.

Kiara’s challenge with NP damage is that her steroids are all debuffs. Her strengthening will help, but for now, NP5 Ody’s neutral damage is a bit better than NP5 Kiara’s x1.5 damage outside of her burst turn, and Da Vinci is about the same as her under those conditions.

I already have a good amount of aoe riders thankfully, so there’s no real need to roll for him actively, it’s just unfortunate none of them can loop, so if he ever spooks he’ll have value for me.

USAshi and Spishtar will be plenty good enough though if I am for some reason super set on looping though.

Honestly his kit seems mostly like Achilles’s kit shuffled around a bit, painted blue, and not as cute.

So I’ll stick with my carrot and lil genius

Between Odysseus and Achilles, Odysseus arguable does it better since he loops more easily, removes most invincibility, evade, and DEF Up effects upon NP, and has great Arts cards while also enabling some big brain plays with his double taunt.

Achilles’ only real advantage is having a moderate crit steroid. They’re both good, but Ody won me over by being a date you can take almost anywhere

I’d still rather look at my carrot…

Imagine not having both

Yeah I’m pretty positive Ody is better, one fact alone that he’s Castoria compatible when quick is struggling to keep up paints a picture.

My Achilles is an NP1 spook, so he admittedly doesn’t get a lot of screen time, anyway.

One of the best spooks i’ve gotten, yes.

He’s one aesthetic motherfucker. Looks like a final fantasy main game boss. Oh yeah and his kit is solid too

For any Code Geass fans here 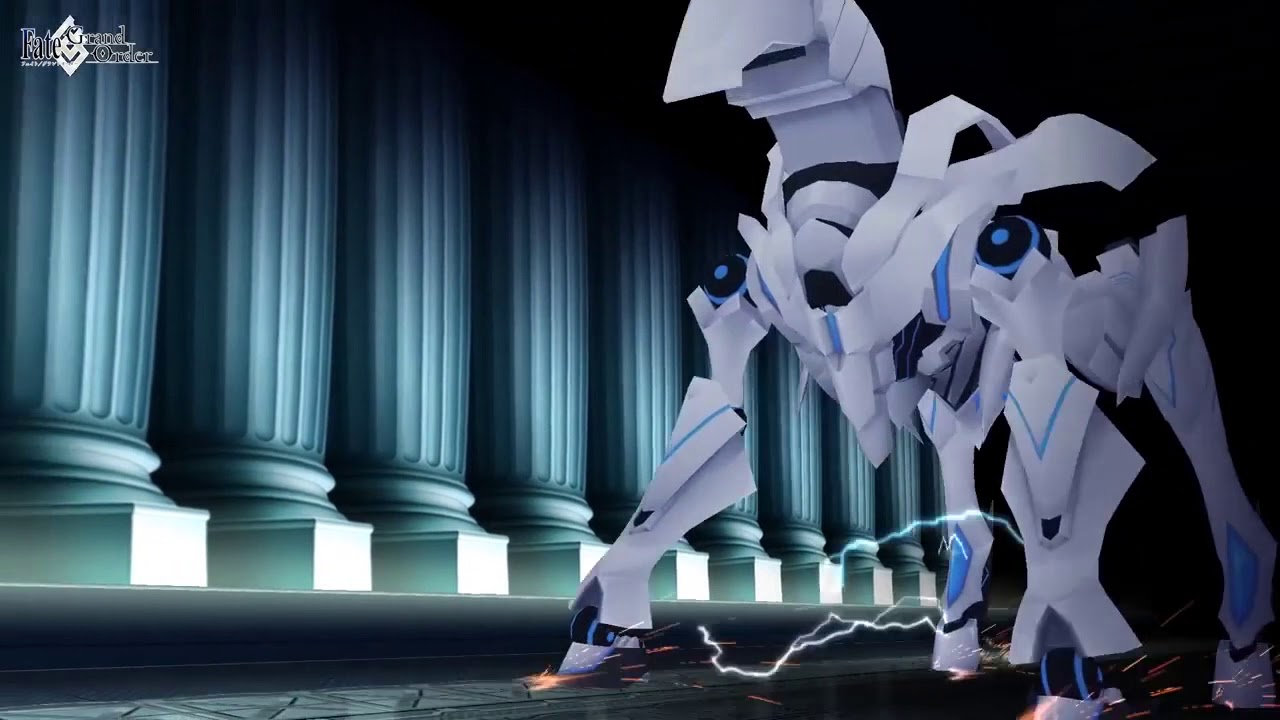 Odysseus is fine and his s1 is his most useful skill but likely to be used to make him a buff fodder.

He is perfectly serviceable, but he’s the worst farmer of the trio. Mordred’s refund (albeit not damage) is insane, and Da Vinci can get around any node composition with a 50% CE as well as fuel a secondary attacker.
Da Vinci’s neutral damage issue will eventually fully evaporate as appends on Castoria+Vinci’s charge means w2 is freed up in all kinds of ways.

I think he’s fine but not stand-out. Buff removal resist is rare and nice to have on the invul, but by itself no longer a USP as Santagale is around. But it does mean a higher CQ ceiling without dropping an Arts support for Santagale.
Much like Europa I think he’s a great spook for a newer player as he has good survivability and his s1 can be used for another servant’s benefit, giving him some value beyond his DPS role. Otherwise he’s certainly pretty, but his other skills+NP are nothing standout.

Survivability wise Ryouma Lancer is pretty much the Limited version of this buff mix.

Having lolivinci and Kiara, I pass on Ulysses to save for Castoria.

I’ll be tossing some tickets at Waver’s split rate-up, so there’s a tiny chance.

Meh I never really cared much for farming(especially since being a veteren player my roster is so stacked that now a days I pretty much just roll for waifus, husbandos or just servants I think are super cool or have interesting & fun gameplay for many fights like Odysseus) and never having an AoE rider up till now is nice to have.

But like honestly, he’s still an ARTS AoE servant with decent hits so pair him with double Castoria an I’m pre sure he’ll loop everything. Man it’s crazy to think just how much better of a card type arts is to quick and buster post-Castoria, if Sei Shonengon was arts for example she’d be actually broken lol

Quite interested in his applicability in boss fights and challenge quests, taunts are an extremely powerful tool so I imagine you could def use him as a sub-dps support for servants like Salome(I’ve contemplated about loring her S3 since her gameplay looks really fun, other end she’s a 2* which means most likely will needs grails :copium) or Vlad III.

An I love full def buff purge before damage an having survival that effectively blows the standard survival skills out of the water being typically 6 turn down time, 1 turn evades that also comes with 30% def up. as said but you can actually run him as a support sub-dps cause of his good star gen, taunts, okay-ish support an fearsome offensive presence.

His taunt isn’t really a ‘sub-DPS’ toy and more a tool to control who goes down, which combined with his team card up and tankiness makes him a decent damage sponge plus nice little sub-buffer. His stargen being okay doesn’t help other DPS unless they have a massive star gather because he’s a Rider.

I think if he’s used outside of being a main DPS he isn’t likely to contribute much damage.

Mmm, that said - Arts has AoE buffs on CasGil/Lan Ling & 1 on Tama, so you can probably wrangle some enhanced facecard play or half decent 2DPS team. I’ve been dicking about with Lan Ling+CasGil+Merlin or a similar mix featuring another DPS during CBC.

Also congrats to @Gou , I just saw your Odysseus in game. Really can’t blame you here, he’s got a banging pretty boy design and mech. What’s not to love?

(I’ll personally stick to finishing Lolivinci’s last NP level, I like her in story and I can’t afford to 3 lore more alternatives with my upcoming lore costs and appends. I have more skill targets than lores in a year and had to make cuts already!)

Thanks, but yeah, lores will be a bottleneck when Appends hit. I do also plan to get Da Vinci’s last copy if Castoria isn’t too mean to me.