Possible to clear Main Quest from Orleans to Solomon in 1 month?

Yes, it is. Singularities before Camelot aren’t hard even for an undelevelled roster, and you can solo Camelot, Babylonia, and Solomon with friend support if you are in a hurry. A month is enough to even read the story, not just skip it to jump from battle to battle :D

There are spoiler-free walkthroughs on the main site from Camelot onwards if you don’t feel like going blind:

Friend’s QSH, or bond10 Herc with bond CE, or Cuzilla will be able to carry you.

It’s nice having Euryale raised for Camelot tho.

I remember binge-going through Orleans, Septem, Okeanos,London, and America in two days or so when there was an 1/2AP campaign and not having problems even when my servants weren’t max leveled and had skill levels around 1-2-3 :D Camelot is another story tho, so yeah, either raise your team, or use friend support. You have a lot of options now, much more than were available at Camelot’s release.

You can clear all up to Solomon in one day if you skip story. Not to mention you can solo any content in phase one before so you don’t even need a proper team to do so.

I would not suggest to do so, instead taking your time and play trought the story, but yes you can do it.

Yes, especially if your master level is low, you probably won’t even be able to use up your AP since it keeps refilling after each level up and story quests give so much exp per AP.

If you want to try out a speedrun, this is the (only?) record to beat apparently 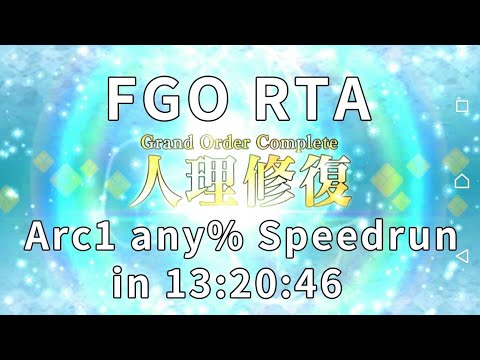 I went from Septem to LB1 Intro in around that time

You can even do it on one week if you try hard enough, but the event may be hard if you rush the story on the easy way, but is good that you know that you can.
You can solo amount any quest if you have a Herc with his Bond ce on your friend list

Honestly, the only chapter that took me more than 2-3 days to finish was Salem, and only because it was time gated. I don’t particularly rush things, and read it as I go, so if you’re making a concerted effort to speed through them, you should have no trouble at all. I doubt you’ll enjoy it as much, but you would know more about what you find fun than I do.

Very little of relevance happens in singularities 1-5, other than some characterization for Mash, so it’s not a huge loss if you skip it. I would strongly encourage slowing down and reading once you get to Camelot, as that’s where the stories actually start to get legitimately good, with both Camelot and Babylonia being generally considered two of the best chapters to date.

I actually did something similar last year, though in my case I realized I couldn’t do the event when it launched. I had done up to Singularity 5 before then, but any player will tell you a single good friend support at 90 can carry you that far. I did Camelot, Babylonia, & Solomon in a week while still enjoying the story, so you can definitely do it in a month.

The longer chapters took me about 2-3 days going at a rate of 3-5 hours per day. The longer ones were mostly Babylonia and both Lostbelts. Camelot and Solomon were relatively fast. Prior to that, you just cruise through. The Epic of Remnants are shorter too, not that those are relevant to your concern.

The best advice I can give is to just keep a Cu Alter or Bond 10 Heracles as your anchor. You shouldn’t have too much trouble with most of the content. Solomon is actually easier than Camelot which isn’t nearly as bad as people say. Babylonia is kind of harder than they make it out to be, though. Mostly the mobs. It is hard to sustain against those and they get beefy.

Nice. Thanks for the replys guys.

Max level starts being a thing you need around Shinjuku if you do the Epic of Remnant, ironically LB1 is a little easier than most of the Epic of Remnant, but you’d still need a max level team by the end of it. As far as skills go, I do not have a single servant at 10/10/10 and I have completed all of the Story content released so far. Certain skill are good to have at 10 certainly, but the vast majority of skills can be leveled to only 6 or 8 and be fine. Gauge charges should be prioritized(especially if they can charge to 50 or 100 at max level), then skills with high team boosting or burst damage potential, after that you have to make decisions for yourself. Some skills aren’t really worth raising at all, I love my Karna but his first skill is the same whether it’s rank 1 or 10.

What skills you raise and in what order depends on what you have available and who can benefit from them. But honestly most skills are fine being at 4(5 and later is when you start need mats) or 6(first cooldown reduction) for a while.

Some skills aren’t really worth raising at all, I love my Karna but his first skill is the same whether it’s rank 1 or 10.

What skills you raise and in what order depends on what you have available and who can benefit from them. But honestly most skills are fine being at 4(5 and later is when you start need mats) or 6(first cooldown reduction) for a while.

100% agreed. My Karna is currently 1/8/8 in skills. Certain skills you want to max just to get the cool down lower because they’re useful on a servant you expect stay around.

Also pay attention to what CEs you plan to use with servants. I have Spartacus’s second skill at 6 because I normally have a Kaleidoscope on him. I don’t need to juice his skill any more because that combo let’s me fire off his NP right away. That and I don’t plan for him to stick around much longer afterwards.

You’ll also have access to the follow function now, so you don’t have to negotiate finding a space in the FL of someone with a big-name friend soloer like Herc or Cu Alter, which’ll make life even easier.

As far as 10/10/10s go, it depends on who you’re using. Some Servants do their jobs perfectly well at 6/6/6 or other lower benchmarks. The only “mandatory” 10/10/10s will be any of the big-name supports you come into - but even among them, Merlin, Tamamo and debatably even Waver can both get away with 10/x/10. Batteries and big-value buffs like Mana Bursts are worth raising as close to 10 as you can get em. But, despite having many premiere options at 10/10/10 and a handful of those grailed, I’m still regularly employing Servants at 6/6/6 or lower and I barely notice the difference - although notably, that’s because they’re sharing 10/10/10 supports who do most of the buffing. The nature of the skills will be more important than their values, and even top-value buffs are normally serviceable at level 6. Case in point - 100% buffs like Merlin’s Hero Creation or Sigurd’s Primordial Rune are 50% at level 1 and gain 5% per level until gaining 10% at level 10. So at level 6, it’s still hitting 75% - and that’s pretty much the worst case scenario. Actual useful buffs don’t typically exceed 100% in value, so 25% is pretty much the largest gap you’ll ever see. For most skills, the difference between level 6 and level 10 is 5% - which can definitely come in clutch, but isn’t the end of the world not to have.

TL;DR give out your lores to people you like using or find yourself using a lot, moreso than people who are Good TM, with the potential exception of 50% batteries if you’re down for high-intensity farming.

In 2019, I started playing december the 5th and was able to join the Christmas event the 20th.
So took me 2 weeks playing A LOT to finish Solomon watching the cutscenes.
It’s possible with a good support list and time to rush.