So I got fire emblem thacria patched and running, but genealogy is like that one npc that annoys the life out of you and you cant do anything about it(zelda fans know what I’m talking about)
Here’s the prob: I got the Japanese rom from somewhere and it works fine, but when I patch it, it stops working. What am I supposed to do?

Ah, it seems you could understand what to do in my reply on your previous thread though you should’ve asked there instead of making another thread

Anyways I just remembered that the patcher I shared for Android can’t apply “Project Naga”'s patch (apparently, I tested a while back but I don’t know the reason).
Try to patch with this if you’re doing that on Android then, though I haven’t tested it:

Please read before you download: This program will not help you hack native android games, it was created for the old console games (Super Nintendo, Sega MegaDrive, Game Boy Advance, Sony PlayStation etc.). UniPatcher allows you to apply patches to the game ROM. What is a patch? The patch is a file with the modified data of the game. For example, a game translated from Japanese to English. You download the patch containing the translation. It must be applied to the Japanese version to get the ...

First of all: d’oh.
Second: I’m actually doing it on PC. Best part is, with the gba, gc, Wii and the ds hacked game I got
All of the games I care about in the series.

Ah gotcha, are you using Lunar IPS? Have you opened the ROM to test it on your PC? (Try to test the unpatched ROM, and then test the patched ROM).

Though I remembered there are other patch formats like .ups so you may need to try a different program (sorry for that).
If that’s the case then: 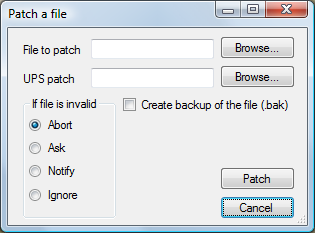 UPS patcher for .NET or Mono. Can create patches, patch files and get the offsets changed by the pat

I tried the unpatched rom and it worked fine…
Could it be because project naga is In beta?

Maybe, but it should work just fine still.

What are the names of the original ROM and patch you’re attempting to patch? Maybe we can figure something from that

Ok the original rom is fire emblem seisen no keifu and the patch is project naga.
Already got thacria😀

… I think I know the problem… I used the wrong emulator. Will try the famicon one and see how that works

Ah I was thinking you’d copy the exact file names… and the format which can be seen on the file properties, I wish I could share some shots from my PC but right now I can’t.

this is from where you can get “Project Naga”'s translation:

happy 20th anniversary, genealogy of the holy war. here, have a translation patch!Download the current version: Beta Version 7 (7 July 2016)to use this patch, find yourself a clean japanese rom of the game (no, we cant point you towards one), then...

… I think I know the problem… I used the wrong emulator. Will try the famicon one and see how that works

Hold on, which emulator are you using? Both games are for the SNES so the emulator has to be for that console, in Japan it’s known as “Super Famicom” though.

I use Snes9x but you can try either that one or BizHawk.
ZSNES is an old known one but don’t use it at all, it hasn’t gotten an update in more than 10y When you said pic, did you mean like this?

Oh no, what I meant to say is that if I was on my PC I could share some shots so I’m trying to help from my phone.

Anyways I see, that’s the name of the ROM, but you can just copy and paste these details in your reply when using GP on desktop

Well, let’s see… are you patching a copy of that ROM? It’s important to use one in case patching doesn’t work.
But if you’re doing all the steps correctly

try downloading from somewhere else, make sure the ROM is in .smc format, it might be that IIRC

I actually found a smc version just now. Give me a few min…

CALL THE PRESS!!! I DID IT!!! once I patched the smc rom it worked! Gods, thank you for your help​:sparkling_heart:

Cool, as I saw the filename I remembered that, glad it’s working
:feh_bkok:

Do the same with the FE5 one, if it isn’t working it’s likely that you need a ROM with .smc format

Actually, that one was easy. First one i patched
Now, to summarize:
I have thacria, genealogy, binding blade, shadow of dragon, blazing sword, path of radiance, radiant dawn, awakening, revealation(only path that counts), echoes and heroes of light and darkness… and 1 more, I think…
Hopefully this will get me through the lockdown…

I see, that’s good to know.

Hopefully it’s enough! You can find games from other franchises as well (or more standalone games), I’ve been doing that

This is a good deal.
While we’re in quarantine, I have hooked up my SNES classic (modded) and have been doing translated gaiden.