Some of you may know, others may not. But we are getting Raids in Oniland. 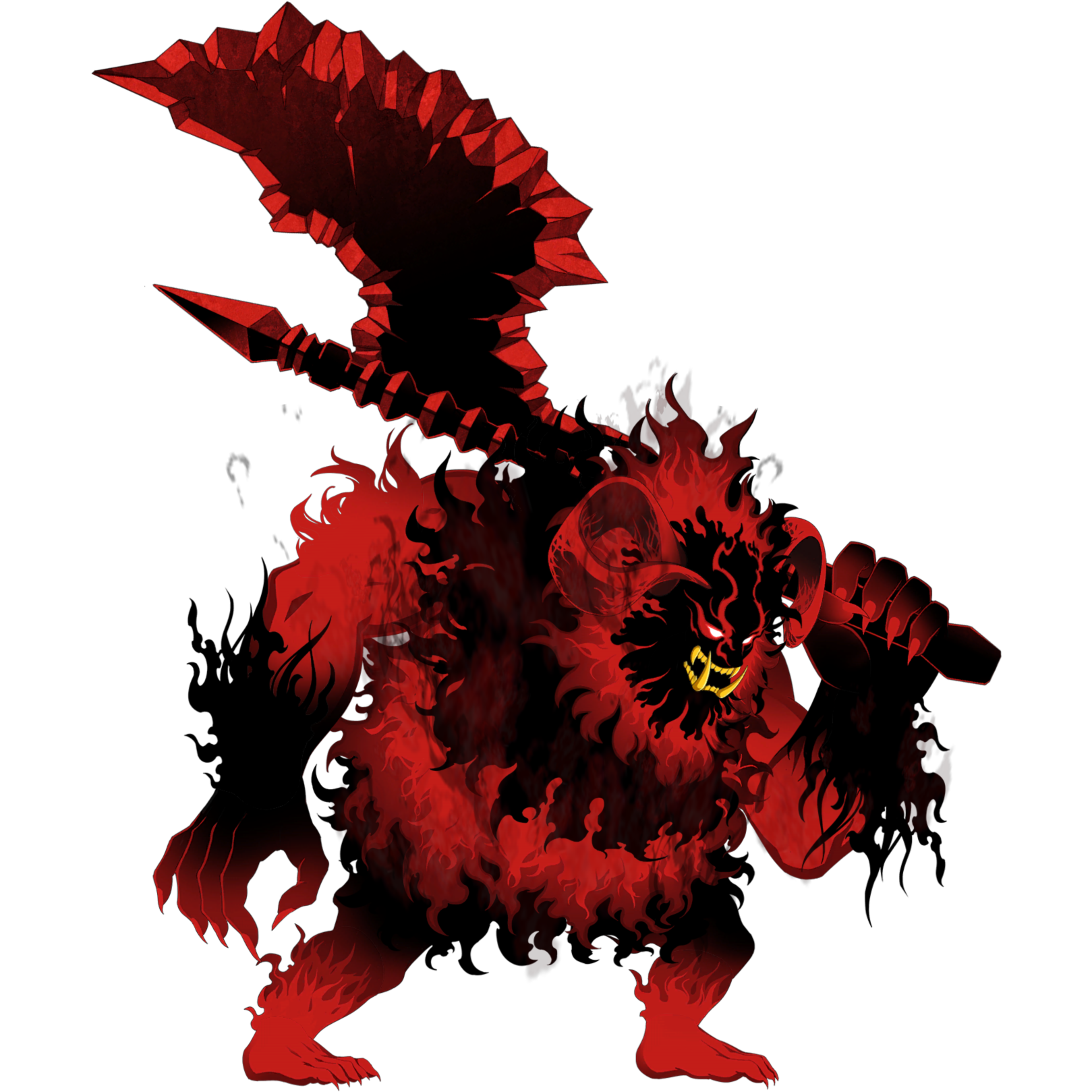 Damage bonus is based on point ladder progression, so don’t leave it for the raids, try to finish some of it early on.

Another reason why you shouldn’t leave points solely for raids is because of raid type. It’s based on number of kills across the server, 14mil times for the highest raid. With all dedicated players raiding, that’s gonna go fast. And if you don’t wanna farm free quests or at least not much, try to do the raids as soon as they go live.

Also Card type damage is boosted depending on the event CE equipped, and certain servants get point bonuses. SPECIAL NOTES
Try to one shot the boss, after T1 he may cast 40% NP damage down.

Shuten Caster gets 50% NP at start of battle, and she has demonic damage bonus against the boss. (Update) You cannot get NP5 from shop before the raids. Her NP copies are available only after you finish main quest, ie, section 11. She cannot reliably 1 turn this raid.

Some comps I found on YT, feel free to post other ones: 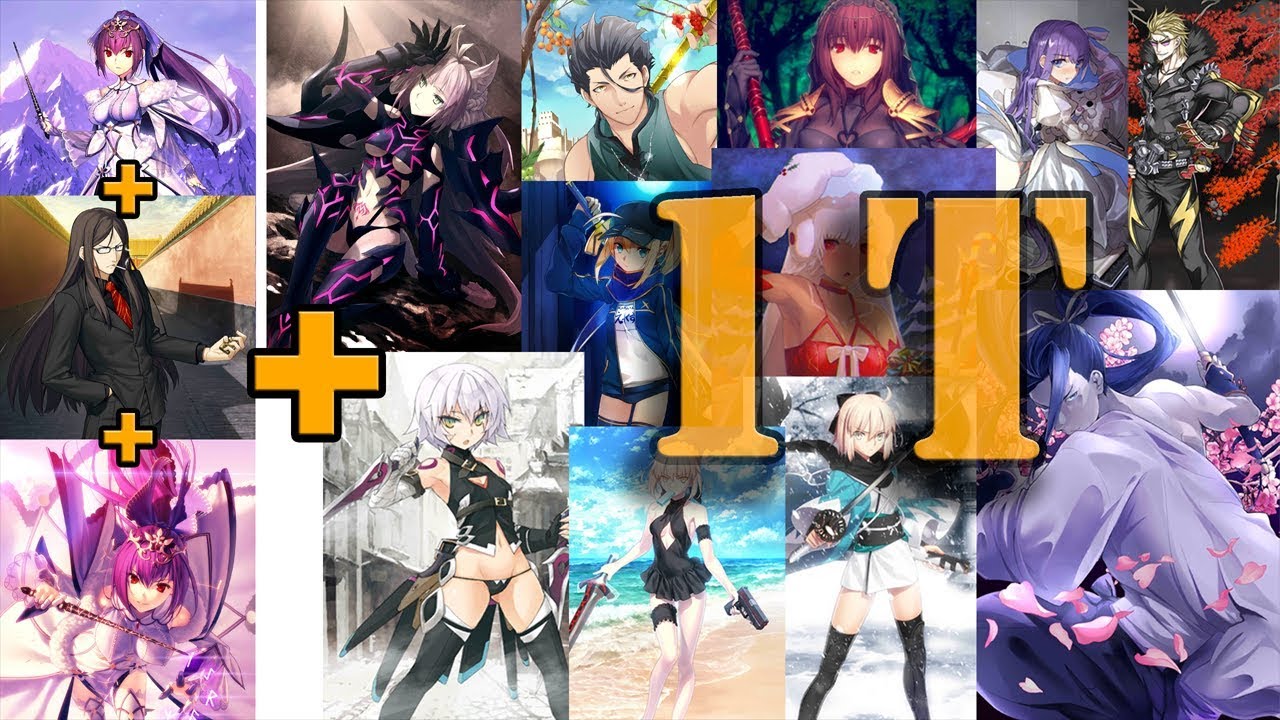 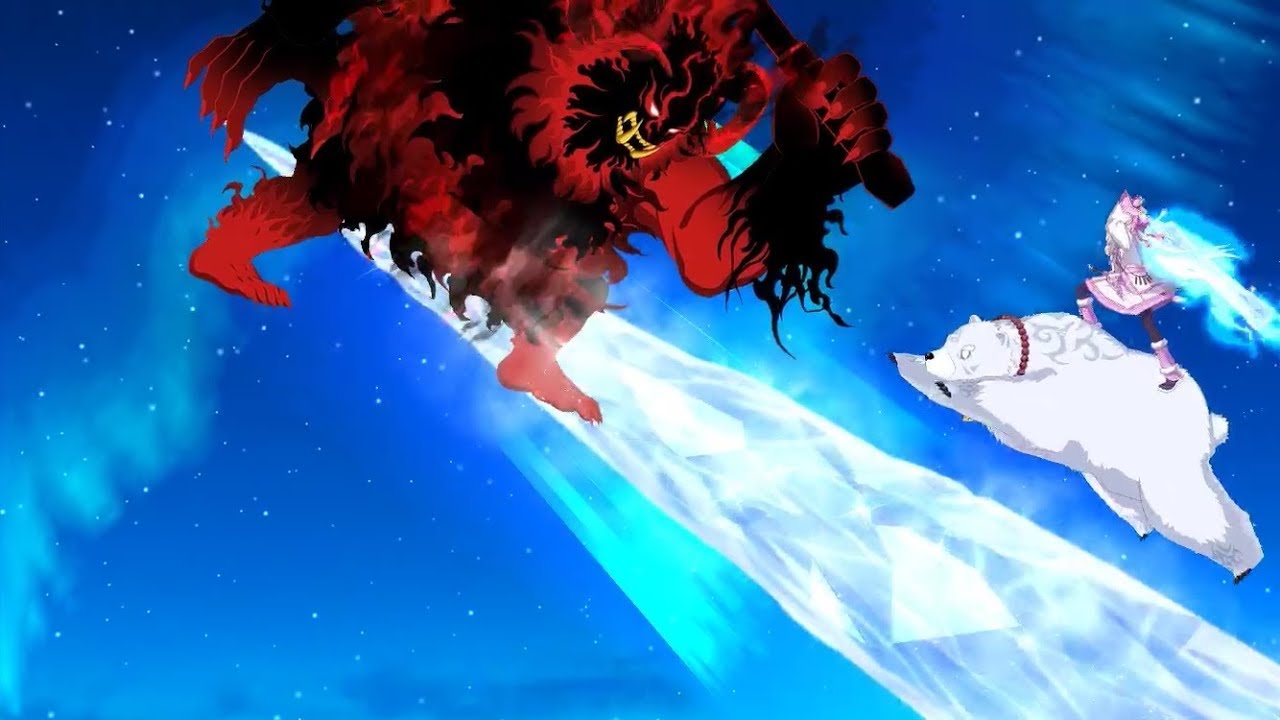 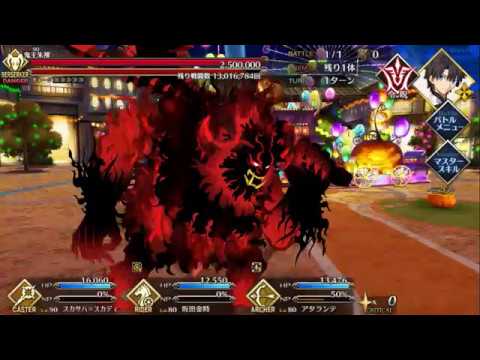 These are from the re-run but may still apply: 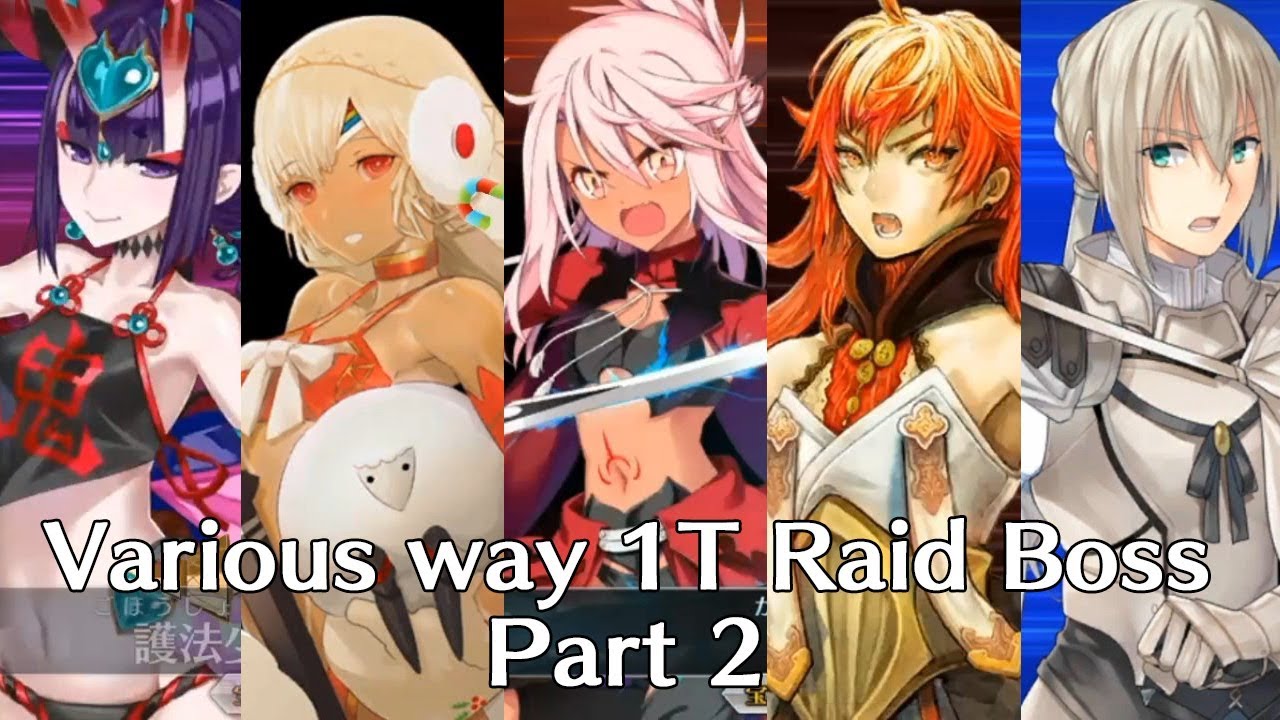 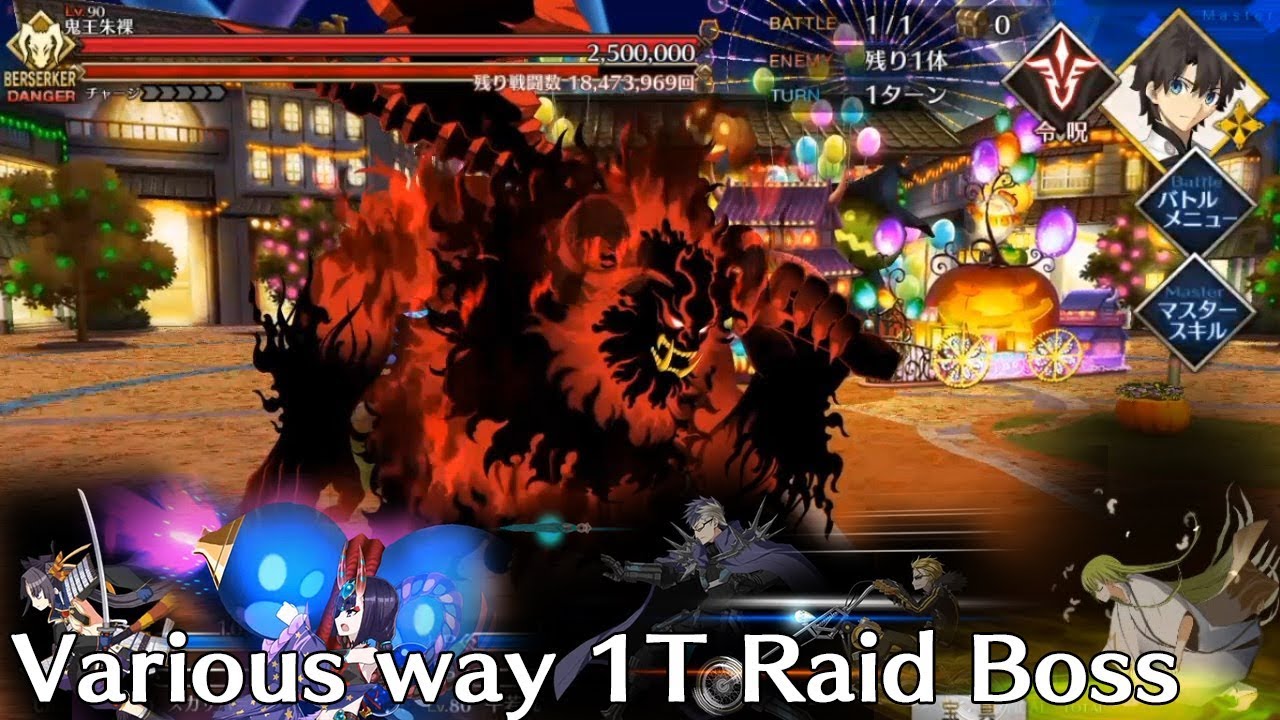 If you borrow a DPS from your FL, your damage bonus will not be affected by their point ladder progression. At least that’s what I heard from Tolovetrouble’s stream.

Damage bonus is based on point ladder progression, so don’t leave it for the raids, try to finish some of it early on.

Wait, really? Guess I missed that reading about the event.

Too bad I don’t really need the raid materials besides event ones, but I think an okkie, ridertoki, support skadi sounds like fun for a 1 shot deal. Okkie 30% plus 20% from giving kintoki overcharge is equal to another skadi buff. Hoping that plus artic is enough, and I should reach level 7 artic before then too, just 0.75 mil to go!

I think an okkie, ridertoki, support skadi sounds like fun for a 1 shot deal. Okkie 30% plus 20% from giving kintoki overcharge is equal to another skadi buff.

I, sadly, don’t have ridertoki. …Wonder if NP3 Maid alter will work?
Hm… I’ll need to see who I have that gives the best buffs for her…

This will be useful

Well one of the videos @Deadsocialskills linked shows that double skadi and waver plus most any st quick servant can 1T the raids, including diarmuid and kojirou. So np3 maid alter should be more than enough.

I’ll just plan on kintoki because the native 50% battery means that just one skadi is needed for full charging, so I’m not also tied to waver and can plugsuit atalante or something for a bigger buff.

Should be able to do it so long as you’re willing to grind a bit early on to get more damage bonus.

With waver buffs, plugsuit and double Skadi, kintoki did 2.54 mil minimum damage so I don’t think okkie and arctic MC would work.

3rd video ^^^ has 3 mil damage from kintoki supported by atalante and double skadi, and that’s a good deal overkill. So I’ll at least try it for the artic exp, but if not I’ll plugsuit atalante to seal the deal

I gonna take advantage and use several of my less used Servants such as Rama, Siegfried, etc.

Any decent ST Servant should be able to 1 turn this.

It’s not like I’ve got much else to do when it gets slow at work…
And I’ve almost got my Waver maxed, but I need feathers and hearts, so I’m definitely aiming for getting those ASAP.
Also plan to shamelessly whale for OG Illya- I mean, Sitonai and the Tomoe CE…
I think I’ll be fine.

Any decent ST Servant should be able to 1 turn this.

…In that case, I may use Tomoe instead of Maid Alter every so often, just to switch things up…

I use Tomoe any time it’s feasible.
I didn’t grail her to 100 just to not use her, dammit!

Well if you hit maximum damage, the above comp would hit 2.9 mil damage as well, I just gave the minimum damage because the runs would be consistent. Well if you don’t mind 2 turns, okkie and arctic should work.

Hmmm, I wonder what arash can dish out this raid? That might be fun to test. And if the raids are after the grail reward (not likely but I can dream) he’ll be level 96!

I have all of the big supports, and I’d been working on raising Merlin before I got Waver.
If nothing else, I can just borrow a second Waver to ensure I have 100% worth of charges.
Pretty sure lvl 100 NP5 10/10/10 Tomoe (nearly done with her gold Fous, too) with Merlin, plugsuit, and double Waver will get some impressive numbers…

Hell, I could even give my MLB scope to Waver for that 50% def down.

@Mysty Given the fact that he has ST damage scaling on an AoE NP, I bet you could do some impressive damage.

Well if you don’t mind 2 turns, okkie and arctic should work.

I think you can one shot actually with that good a unit.

skadi, why didn’t you come home? So many sq… So many spooks…