Which is it for you?

For me it’s that episode from Final Singularity (see a screenshot in the post). After seven singularities he meets us again, like older brother watching our struggle from the temple. And then he describes the singularities we went to, while he watched over us all that time and wanting us to overcome the obstacles. It’s incredible sad to realise he’s dead now and will not meet us again in the end of Lostbelt story to describe our journey through seven lostbelts and congratulate us with finishing our goal and saving the humanity. It’s just feels not fair that we will never see him again. 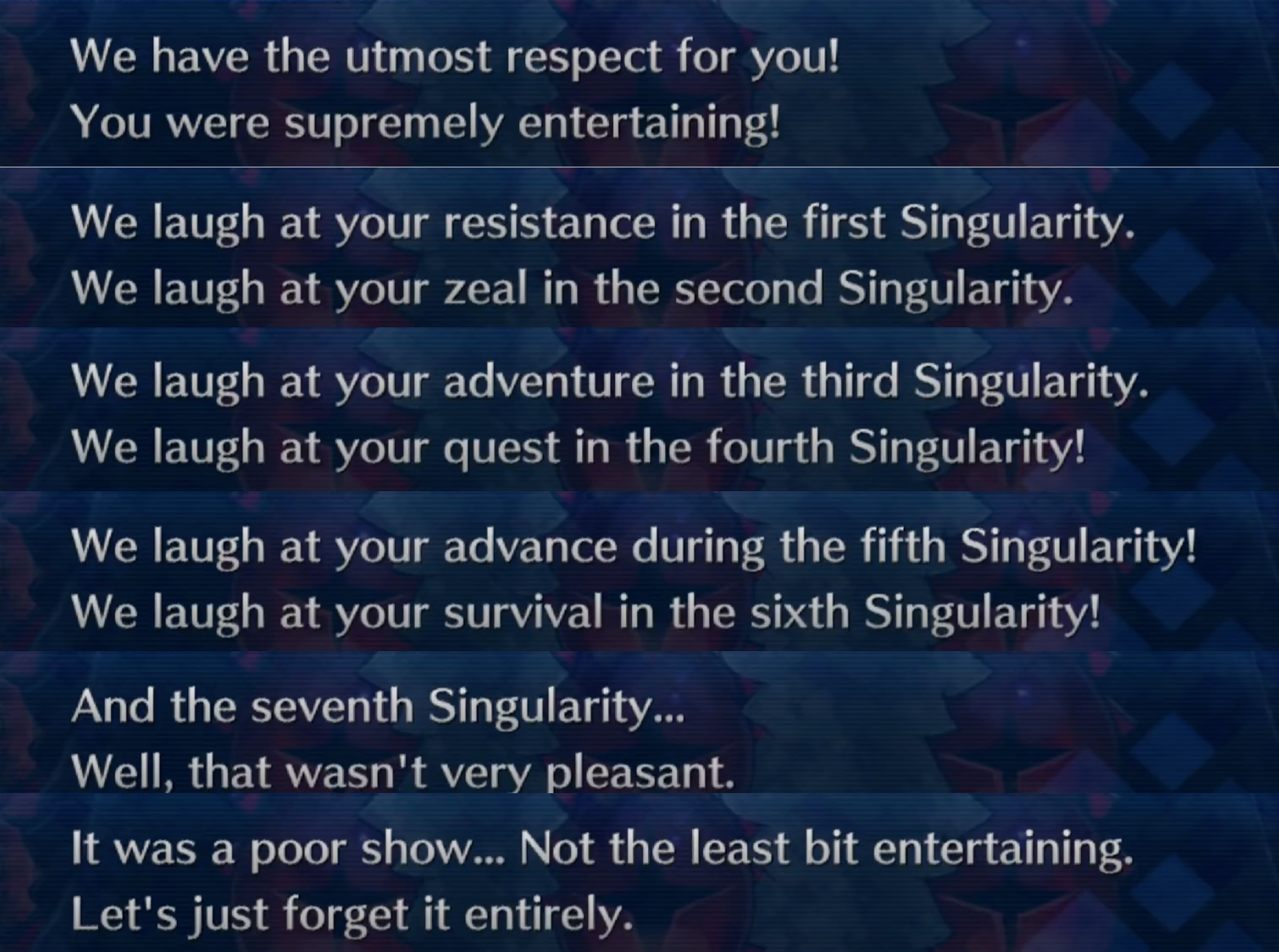 Gonna get a common alternate answer, and my own, out of the way which is the later part of Melt’s story in SERAPH.

Personally never really got invested in Romani so that whole thing never really stuck for me, but I’m not gonna say anyone that felt strongly that they’re wrong either.

I’m also interested in seeing how I feel about the loss of some data when a certain chapter rolls around in a year.

mash’s termination and leaving only her shield

Y’all already know who this is

I’m assuming Spoilers are basically expected in this thread so I’m not gonna bother hiding anything. But Nothing quite hit me as hard as this moment did on my first play through. IIRC that was Goetia speaking.

No, it was Lev Lainur, creator of Sheba.

Flauros then, and by extension Goetia as they are a colony of 72 demon god pillars.

Why have there been so many pro lev posts as of late?

Most of lostbelts in general …but it has to be said

If we talk about lb1 then Ivan > some stupid furry.

off-topic: You know what’s funny about that pic? It looks like the MC is actually wearing something warm, a cloak with even some fur, not just that joke that is the official “Arctic” Mystic Code design.

on-topic:
For Arc 1, I’d agree with Mash dissolving, if we’re talking strictly about saddest moment.
Though if the question was about the most emotional moment, I wouldn’t choose that, since I honestly saw it coming from a mile away.
What had the most emotional impact on me during Arc 1 was rather a certain being with the potential to become a threat to humanity itself - whose “alternate timeline/parallel universe” name and ‘capacity’ I knew from reading the Tsukihime and Hollow Ataraxia VNs - sacrificing all its accumulated power and experiences from this timeline to bring her back.
I understand if it didn’t have that much impact for anyone not that familiar with Nasuverse, but for me it wasn’t just some Deus Ex Animalia moment, but a nod to those who have followed Type-Moon works since its early days.

Arc 2 so far: Agree with @jedaisentai That shit was sad af I like Lily but I still miss OG Da Vinci. The first time I cried while playing FGO was during the last chapter of Camelot, I felt really sad for Bedivere. Then I felt bad for Siduri and I cried when Mash disappeared and Romani died. FGO made me cry a lot but Da Vinci’s death was the worst moment for me.

I just felt useless, she was there, in front of us, with a huge hole in her chest, and we couldn’t do anything for her. I accepted Romani’s death, I accepted Paxti’s death but I still feel bad if I think about Da Vinci.

I understand they wanted to change the cast for the Lostbelt arc and so they replaced Romani and Da Vinci with Holmes and Lily (and I expect a new Da Vinci if we get a 3rd story arc) but for me Da Vinci’s death was the most “useless”.

Did we really need a lily version of Da Vinci? And if the answer is yes, OG Da Vinci’s death was necessary? I don’t think so, but at this point is pointless to complain