Let’s be honest, not every Operator or even Archetype is created equal and there’s a decent chunk of them that should be considered being buffed.

AoE Casters are gimped by short attack range, pathetically slow speed and a possible demerit or two on their kit. Duelist Guards have high stats but overly simplistic kits that end up being powercrept by ones with either more power or utility, and with enough CC Buffs/Debuffs their main selling point - high stats - is severely neutered.

What I’d like everyone to do here is discuss Operators and/or Archetypes they think underperform, give your reasons why, and come up with ways to improve them 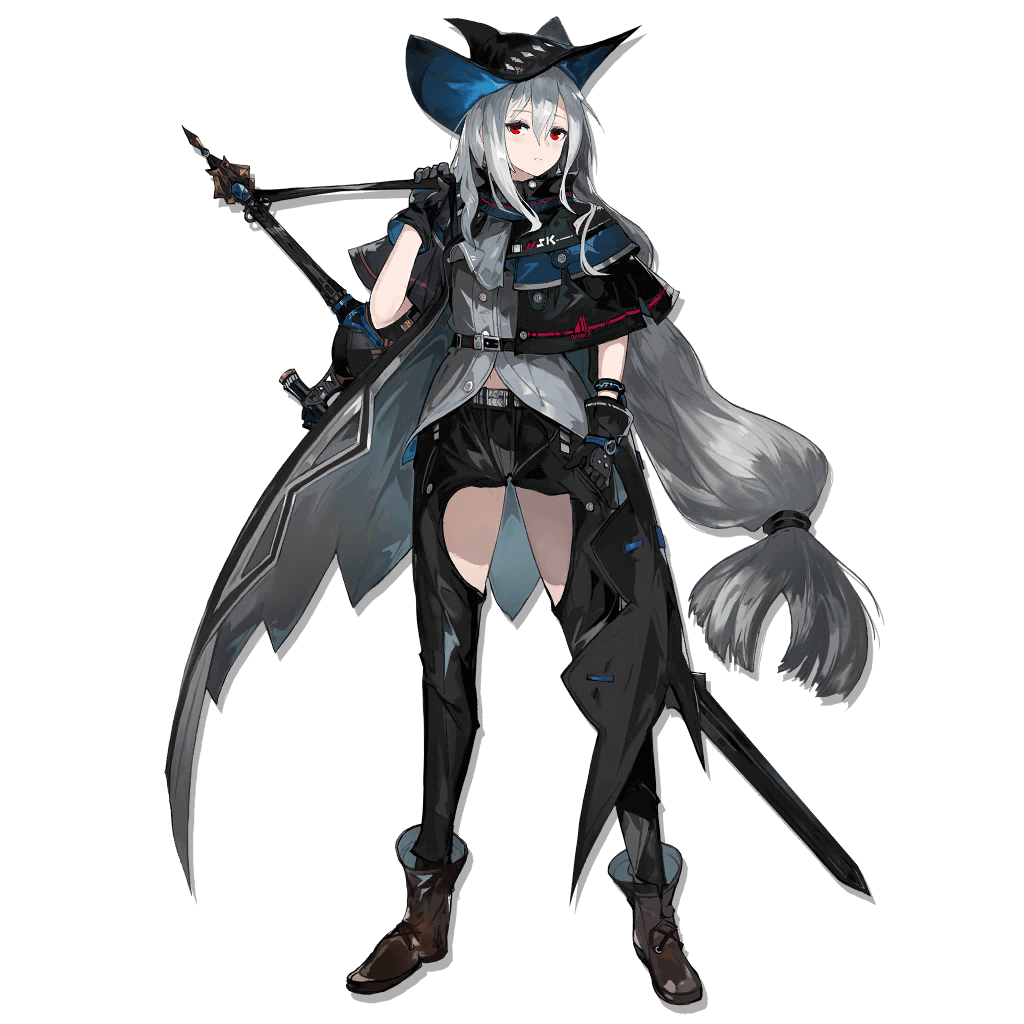 As I mentioned previously Duelist Guards have high stats but are plagued by overly straightforward kits - along with a few different demerits - and Skadi is no exception. She’s been powercrept by nearly every other helidroppable unit who came after her and even has some competition among OPs released before.

It’s an on-deployment skill which gives her a whopping +170% Atk for a pretty long 30 seconds. The problem? As I mentioned this is a skill that only activates on deployment, and once it’s run out you’ll have to wait a full 70 seconds (60 seconds with Skadi’s [Swift Action] Talent) in order to use it again

A possible buff idea I had for this would be for it to reduce her redeployment time further, possibly by another 10 seconds at M3 or more. Since this is an on deployment skill this would make sense to have on her, and would allow her to be utilized more flexibly when handling tough enemies, making timing her retreats and redeploys more lenient

I feel like thinking about what could be is just depressing.
When you look at the brawler and chain caster buffs you know what’s going to happen.
They’ll be like “Skadi gets +5 atk you’re welcome”.

If i was a Skadi fan i will try to optimize her usefulness.
I will add Silverash in my team , with 10% of redeployement gain(6-7 seconds gained)
I will add and E2 Andreana, Specter and the others abyssal hunters.
The strange thing about Skadi is, i bought her for her S3 but i ended using S2 instead.

Can I buff Sora?
Her range is awkward and charge time inconsistent, you’re almost always better off taking another operator instead.

All she needs is a speaker she can throw (think silence drone, shamare’s bear), and problem solved.

She’s a pop star! Can’t put her in harm’s way! Think of all the fans!

For AoE caster they should massively boost their Range.
I mean Sniper work the same as Caster, with (I’m pretty sure) about the same ASPD , which also apply to the AoE specific. So why the Sniper AoE should have massive range while the Caster one has ridiculous range ?
Never understood this logic… and I think having the same range would at least make them viable.

That’s all for me.
Hope these two wall of text are readable and I’m not too far off of the truth/true usage of these character.

Hope you will read it and like the idea

Enemy trips over rope and falls down.
Heavy enemies fall harder causing more damage and taking longer to get back up

With Sora, she has the potential to buff a full team by 300 atk before multipliers, which is a lot. It just never seems to actually work out that way. Just got to keep her in mind for the one mystery map when all your ops are stretched out in a star.

The one map I actually remember using her effectively was CC#0 preseason, buffing Mostima and Eyja, because she was really cheap to deploy, my timings and DP costs were tight and I didn’t have a very developed roster at that stage.

Also maybe the sleep skill will be fun once there’s a few more sleep operators released.

I never found Sora’s range to be an issue, if you can place an AOE Medic in a spot there’s a good chance that Sora can use the same spot.

Sora’s healing isn’t enough for her to be the primary healer on a team, she’s best used as a secondary source of healing that helps a primary healer like a Medic. If you really need the emergency healing that’s what her S1 is for since it increases the healing from her trait. Her S1 is meant to be used defensively like with stall tactics. Say that you have a bunch of Operators who are under attack, their skills aren’t ready yet, and your healers can’t keep up. Sora’s S1 gives you 7 seconds to sort of catch your breath and get ready again.

Enemy trips over rope and falls down.
Heavy enemies fall harder causing more damage and taking longer to get back up

Is that an actual status in Ak ?
'cause I never encounter it.
If I used Root it was because it is an actual term and status used in RPG (Root is like stunt but enemy can still use its skill and auto attack if in range)

As for Sora, I don’t critize her S2, I actually said it’s a good skill that has utility, nor that I found her Range lacking
It’s just that her healing is useless (again, even the passive damage from hazardous map does more dmg), so while there is certainly instance and way to place her, I’d rather use another healer, or some other Supporter that has same utility or better

I didn’t made test, but I find someone like Podenco or Nightmare would do better burst heal with their 1st skill. Maybe on the long run Sora would still be above but I dunno.
But I would still rather use them, or to take a Healer such as Folinic that would do decent/good damage with S2.

I know about her S1 giving you some sort of breath, but at what cost…
Considering you don’t do damage at all (and therefore, miss the Damage boost since you use S1 instead of S2) at that point I would rather use a straight Healer. (again someone like Folinic that would do some dmg with S2)

Again the major issue IMO is that she is lacking in Heal, boosting the passive would be cool.

But that’s just my oppinion.

Is that an actual status in Ak ?

No, no, I was just messing around.

Yeah, Sora’s healing isn’t worthwhile, ideally it pairs with S1, but the cooldown is ridiculous on that skill

It would’ve been better if they’d given her something else like what Shamare has:

Skadi definitely needs that buff another since you already picked her I think another character that could really use a similar buff if Ch’en. She is primarily played in a similar helicopter fashion but as a nuker were you just drop her in and use her s2 to clear a bunch of mobs. While I feel that is a useful trait to have on an operator without some redeployment reduction it really limits her viability. Furthermore, newer content in my opinion making her s2 much less impactful. I think that the archetype in general is also suffering somewhat from the fact that all their skills are basically nukes meaning they lack any sustain. This was likely done intentionally to compensate for the fact that they hit twice which was fine in the beginning, but now that there are more high defense enemies their auto-attacks just aren’t very effective.

I think my buff for her (and even her archetype) is to increase her base attack to something more reasonable for her Guard class at max level her attack is 683 which is simply too low for a level 90 6 star operator (this includes the bonus 23 attack she gets from being pot 4 btw). I think having something in the mid to upper 700s would go a long way for her. Secondly, I think adding a sustain skill is a good idea. Something along the lines of a simple steroid that lasts for several seconds would give her the flexibility of being used as a heli-drop for lower level content while still being useful for later content.

You make an interesting point, and if they keep stacking stats onto enemies, sooner or later she will need a buff. Honestly though, at the moment, I think Ch’en is fine, and I’m rather disappointed Gamepress has demoted her to S-. Her utility is so powerful given the right circumstances. I haven’t started Ch.8 yet, but if she isn’t working like she should I just debuff whatever she’s trying to damage or kill and have had no issues.

Your idea has given me a thought on how to buff Swire though that could potentially get more use out of both of them, and keep with the theme of the game.
This:

Another way to do it, would be - ‘talent effect for LGD members is increased 50%’
This would push Ch’en from 616 at E2-40 to 893 during Swire’s skill uptime (S2M3) while also giving a very healthy attack boost to Hoshiguma (provided the map allowed you to bunch them together like that)
Or maybe that could be the buff for S1 - which caps the talent at 2 times as effective, giving a x2 boost to the talent as opposed to x3 and has a wider range.

I do think Ch’en still has some strengths (primarily her ability to battery other operators) but I do see where gamepress is coming from. I don’t really think she deserves the S rank anymore myself now that there are more enemies that can survive her s2 nuke. Unfortunately her sp generation only benefits certain operators so her utility is very situational. Her biggest consistency was her ability to just assassinate a mob of enemies and now that she can’t do that effectively I think it is natural that her ranking falls.

I think you do bring up some interesting with Swire. Dualstrike guards (by nature of hitting twice) do benefit from buffs and debuffs more than other operators so stronger buff operators will naturally make her better. Still I think that having all dualstrike guards also be nukers limits the classes ability a lot.

As for Ch’en I think her s1 will be an interesting skill to play around in the future as it provides her with the ability to stun an enemy fairly often which is always useful. A m3 the skill requires 4 hits and stuns and enemy for 1.5s seconds. Given that her attack interval is 1.3 it will take her 3.9 seconds to get off 3 hits one of which she can perform without taking damage. Her talent should also provide her the last sp needed to not need a 4th hit. If this is true (I haven’t gotten the opportunity to test it yet) than she the ability to somewhat reliably hold an enemy provided she doesn’t get killed in the 2.5s or so that the enemy has to attack.