Hello! I was discussing with my friend earlier about which 5* would, probably, be receiving a new costume with the upcoming Summer 5 event in JP.

Although it has only happened twice before, we know that the previous two servants, Merlin and Dantes, are both limited. So by looking at all limited male 5* servants (not counting those that have already received costumes), the list of possible contenders are:
Astolfo, Sigurd, Gil, Orion, Romulus Prime, Iskandar, Ivan, King Hassan, Kintoki, Toshizo, Arjuna Alter, Xiang Yu, Amakusa, Sherlock, and Shi Huang Di.

However, if we consider the fact that both Merlin and Dantes had not had banners for a substantial time before (and getting a costume in another event is a perfect way to reintroduce characters who are otherwise “retired” from the summoning pool), and assuming no beastly men (like Ivan, King Hassan, or Xiang Yu), our most likely candidates for showing some skin this summer are:
Iskandar, Sigurd, and Amakusa.

Iskandar: Admit it, this slab of 100% pure beef has been on everyone’s wish list ever since ReDrop redrew that 3* CE with a more ‘mature’ King. Not to mention everyone’s favorite bro from Zero hasn’t been on a banner since its collab’s rerun in September of 2018(JP) .
Sigurd: Although not quite as long of a wait as our previous King is enduring; Sigurd must be on a wild bender, since the last time we saw him on rateup was for New Years 2019(JP). Also, as he’s about to make his big debut in NA in June, his popularity is about to peak for the first time since his release in JP almost two years ago. Although, if they make a summer Brynhildr, then you know for sure that the 5* costume is going to him (and who would want to keep that couple apart? Except maybe Sigurd, if he has been drunk for this long…).
Amakusa: Despite having a recent rateup for the Apocrypha collab rerun in March 2020(JP), I believe this would only revitalize the appeal for having such a powerful Ruler and with 5 months between March and August, I believe everyone’s second favorite priest will have had ample time to get his beach bod in shape. Not to mention that he might even bring his fan-favorite wife, Semiramis, as a new summer servant (which I may or may not be personally praying for).

So who do you think is gonna get that sweet, sweet 5* costume? And who do you personally want to get it? coughNapoleon.cough

Iskandar : Admit it, this slab of 100% pure beef has been on everyone’s wish list ever since ReDrop redrew that 3* CE with a more ‘mature’ King.

Curiosity peaked. Where can one find this CE?

Xiang Yu is permanent though.

It was a redraw of his CE from Summer 2 Chaldea Beach Volleyball (which originally had young Alexander front and center)! 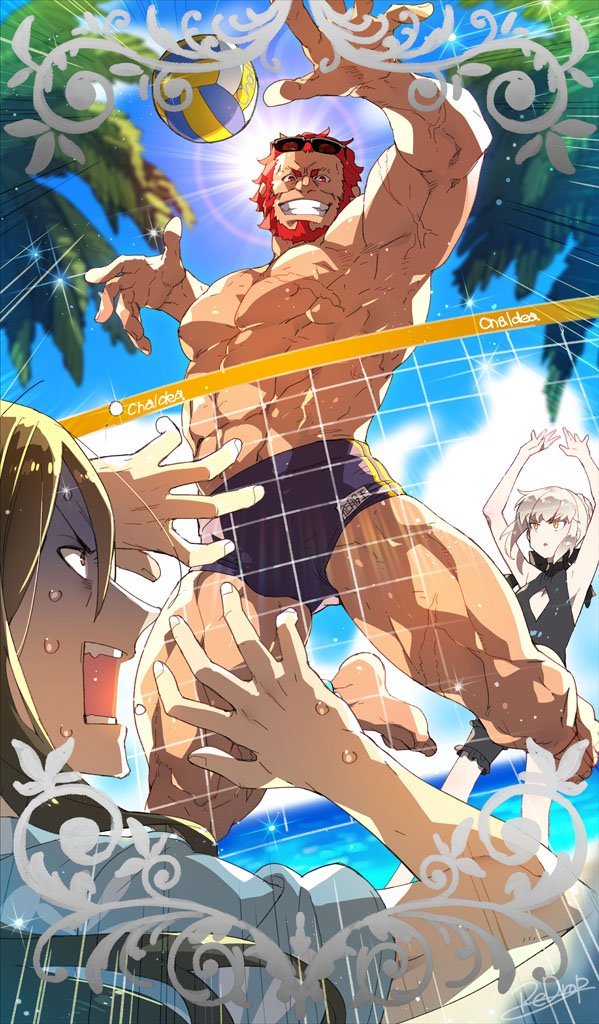 Seriously, Summer EMIYA when? Give the man a summer outfit worthy of cooking on a grill. I’d accept a summer release of EMIYA in general too…imagine UBW becoming a massive grill, with a giant EMIYA standing overhead preparing to cook the “steak”.

Redraw? This should have been the original!