Team comps suggestion to have fun? No kidding, replace OG Medea for another DPS when you fight rider enemies. BG doesn’t fix her damage. Anyway, what are some of the funniest team comps for you?

When I’m bored and I know the enemies aren’t going to cause too much trouble, I’d always go with triple zerk with necromancy with passionlip as the only backup member in case I fooled around too much.

It also serves as a good test for you personal luck stat. Mine maxed out with 6 guts on Raikou, try beating that.

What was your biggest "what is this I don't even" moment in the game? FGO Fluff

Mine happened just now, courtesy of the RNG. I am rushing through Babylonia (and whatever else I can manage before the Merlin banner) at the moment to shore up my SQ reserves, and I reached the infamous Quetz fight. So, I thought, since my own Herc is still at bond 9 and I don’t have his CE, I might as well borrow a friend’s and do the solo cheat setup like that. I did just so, putting a Lv1 Leonidas with Thousand Year Obsession and a Lv1 St. George on the team as well (for obvious reasons). F…

I had fun using a relatively normal Arts team with Nero (vanilla) at the core for the Requiem CQ.

Not an outrageously long or fast kill but the setup was intentionally neither high enough damage to wreck every bar (due to AoE SR) nor holding perfect mitigation/stuns. So Nero actually used and reused her guts to clutch effect - it was close enough to be an enjoyable kill. 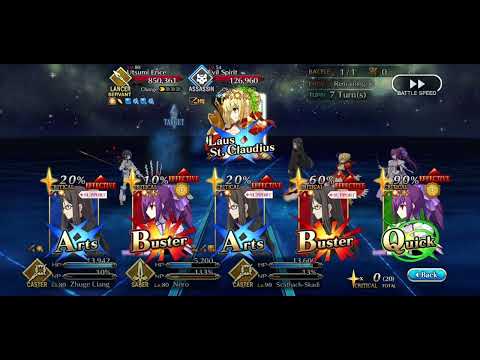 Double Sei System. Throw in a Prisma Cosmos on Miyu, Merlin, Hans or Tamamo as your third servant. Damage is pretty potato, but it’s very satisfying to watch your entire team suddenly charge half their NP at the end of the turn. Great for those long-winded waves of throwaway mobs you get in every singularity to pad things out.

I forget about strategy and just bring a whole party of my favorites. I have the most fun watching them more than others.

This one is a bit hard to have but it’s a fun comp if available, specially against Sabers using the bond CEs (or nearly as much against Riders with other CEs).

In general I use it in Saber nodes and mid-difficulty Saber fights. Also a sometimes in harder CQ/Story level fights depending on the nature of the encounter. I EXplained it a few times before but pretty much what’s fun/cool about it is the Star manipulation: 3 20-Star bombs, 2 Star weight shifting skills, 1 big Star-gem buff (anti-Saber) skill, 1 Crit up Skill/1 crit passive. The set up is the most best against Sabers by far (by theme too), then Riders. But it’s pretty solid/refreshing in general.

Been using it for the Himeji Saber nodes recently. It’s great.

Note: Alter runs the chance of being ‘Crit out’, but since she’s got a big HP pool anyway and an (spread out) 7.5HP heal on low-cooldown she can sustain herself quite well, sometimes better that avg, in most scenarios.

I seem to have fun with stall comps. In the 2020 Gilfest, I beat the Izo CQ with one and, for challenge quests especially, I’ve enjoyed them ever since. It’s just nice to stand there and take whatever the foe can dish out, as satisfying than slamming them with big damage numbers.

Since then I’ve actually pulled even more stallers; Jeanne and Merlin now both grace my Chaldea, so I’m really looking forward to more shenanigans of this type. I also think Iri is seriously underappreciated (she was clutch for me beating the Mephistopheles quest in 2021 with the clown’s timed full-party auto-kill).

This is speculative, but with mana loading now I’m seriously considering trying out a playstyle involving instant-NP for some of the self-buffer Servants to see how they rock - Qin Liangyu and Houzoin Inshun especially, so I might try that party first against Sabers. Need more Vegas QP and Bond levels to do that for either though. But I’ve liked how it uses Mash’s star weight to crit not just her busters, but also her arts cards to mimic the speed at which her previous form can get her NP. Some card-counting element to it as well though that’s a lot less relevant with 2030’s that I don’t have.