The Story Of My Biggest Summoning Session: Road To +10 Brave Tiki

Tiki has been one of my favorite Fire Emblem characters ever since I played Awakening. Between that and how often I visit the Fire Emblem Heroes subreddit, you bet I noticed how people were frustrated and annoyed over Adult Tiki being ignored in favor of Young Tiki. It all started with the addition of Halloween Tiki. Resplendent Young Tiki, Legendary Tiki’s remix and refine, and Summer Young Tiki’s refine only added more fuel to the fire. But I think the main thing that officially made Adult Tiki fans decide that they had enough was the addition of the 2021 Halloween units. After that, more and more people started pointing out how she was ignored and shafted, and you bet I noticed. I’ll admit that I was pretty bummed about the whole thing myself, but I was never incredibly vocal about it. But there was not just frustration, there was also a sense of determination. I started to notice people campaigning to try to get Adult Tiki on the CYL 6 banner, and let me tell you, there was absolutely no way I was going to pass up the opportunity. A CYL campaign for one of my absolute favorite Fire Emblem characters? Count me in. And trust me, I was determined to make my contributions to the campaign count. I did it not only for myself, but for all Tiki fans.

I had been thinking about who I would vote for in CYL 6 for quite a while actually. I had also considered voting for another one of my favorite Fire Emblem characters, Azura. (Vote Azura in CYL 7 plz) I had gone back and forth regarding what my final game plan would be, but after a lot of thinking, I made up my mind. I was using all 7 of my votes for Adult Tiki, no matter what.

I’m glad that my friend agreed to help me out with voting even though he does not play Heroes, it’s been a hot minute since the last time he played Awakening, and I don’t even know his opinion on Tiki. You would not believe the amount of anticipation I had for the interim results. My prediction was that Adult Tiki would be 6th at worst and 3rd at best. When I woke up on the 24th of January to find out that she was 1st on the females side, I was excited. Due to the determination of her fans and the Three House fatigue, I was confident that she would hold onto her position. That being said, I knew that it was best not to let up considering what happened to Camilla in CYL 2 and Marth in CYL 3. After voting ended, I just could not take my mind off the eventual reveal of the final results. I figured that my main hope would become reality but knew that anything could happen and hoped for the best. Let me tell you, learning that Adult Tiki won the Females Division of Choose Your Legends 6 was the most excited I have ever been about something Fire Emblem related. I was not only happy for myself, but also for the rest of her fans. They put up with her being ignored and shafted for years. Their efforts not only made CYL 6 more exciting, but also resulted in what just might be the greatest comeback story in Fire Emblem history. Learning that their girl won the Females Division of CYL 6 was the happiest they had ever been, and I was happy for them and glad to be a part of their efforts. After the CYL 6 results were revealed, I was determined to get Brave Tiki to +10 the day she came out. That being said, there were some banners and units that I just could not pass up (Hatari Azura, Valentine units, Elimine, A Hero Rises 2022, Fallen units, and CYL 5 rerun). Now I know what some of you are thinking. What do I think of her art and how she functions as a unit? As for her art, I think it looks pretty nice (even though Young Tiki’s outfit wasn’t my first choice). Can’t go wrong with PenekoR. As for what type of unit she is, believe it or not, I was hoping that she would be a fast infantry sword unit. Her wielding Falchion and looking badass while doing so would have been so fucking cool. That being said, my Arena core desperately needed a tanky unit, and she fits that role quite nicely. Anyway, enough back story. Let’s get to the results of my summons. Overall, this was the most I have ever had summoning in this game, and this might be the only time I get a unit to +10 on the first day of their debut banner (unless Azura gets on a CYL banner one day, but who knows if that is going to happen, really hope it does). Thank you for taking the time to read my story and I wish you all the best of luck with your summons.

P.S. Where my fellow Tiki fans at?

I’m still working on mine but I will +10 merge her gradually with her many upcoming reruns.

Solid build on her too. That Draconic Counter seal was made just for her wasn’t it?
Anyways, may B!A!Tiki continue being amazing for you and in two more years for her refine!

588 orbs/130 summons is absolutely insane for a +10 5* exclusive especially with all the other units that you got.

She looks awesome. Congrats on that insanely low orb count.

I’d been hyped for her and thought about putting my 2100 orbs to use trying to merge her but to the first spark, pulling full circles aiming for 1 copy of everyone, got me a red and colourless off focus and only seeing 5 green orbs total… Yeah, it’s not happening.

Luck was on your side!

Hey Congrats, especially in less than 600 orbs. I’m admittedly about 800 in and still only at +5, so I’m having a bit of a time of it, but I will be joining soon enough in the +10 Brave Tiki club.

I wish you the best of luck, man.

P.S. Where my fellow Tiki fans at? I am a little bummed, to be honest. I was expecting more merges for what I summoned for. I got a lot of pity breaks as well that could have easily made Tiki +10 plus several 4* specials that aren’t worth mentioning at all to be honest. I got my first Brave Chrom and Brave Byleth, my first Charlotte, my first Pent, a copy of Female Kriss (who got fed to Ninja Shamir), and a copy of Priam. Yes, yes, I got good fodder but I am not interested in them. The only one I want is TIKI-SAAAAN!!

I hope that with the orbs I can get in the span of the banner can get me at least to +8. I don’t want another repetition of Lilith again and wait two years to finish merging her. Good luck to all who will pull for the most beautiful dragon ever.

I wish you the best of luck, man.

Congratulations on finishing a project so quickly. She’s magnificent.

I’ve decided to make her a +10 project as well. But I have other goals right now and have decided to skip this banner before the units were revealed. She’ll be complete after the rerun and Hero Fest. 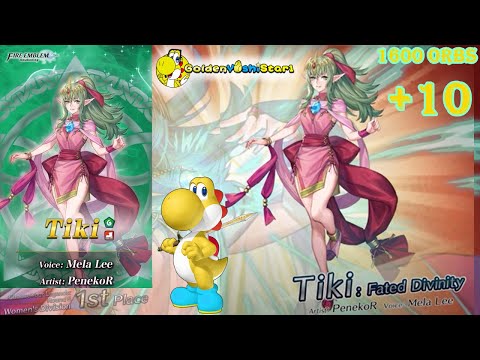 I definitely would love to see Azura win CYL’s. I’ll save Orbs again and even try to +10 her if she wins. F! Corrin probably has a high likely chance.

Similar to you, I also sacrificed a few orbs to finish Spring Veronica, and even Ascended Laegjarn of which got merged up from where I had her to +8. Only because of the annoyance that is Feh-pass locked free heroes after 40 summons [Damn IS, that was a big fucking mistake], and now I have a +8 Ascended Laegjarn, when it could be +9.
I was annoyed that IS gave us the artistic design that makes her still look like her younger form instead of some far superior ideas involving Marth, or Bantu, or even Naga.

ACTUALLY, it makes me wonder if Young Tiki won CYL’s via CYL’s 7+, would IS do more work for her than they did Adult Tiki. If that is the case, then that should be a sign of complete and utter BS. If IS wants to truly redeem themselves, they need to release a Resplendent Adult Tiki right now or at least next few days.

I hope they at least make her Refine the best Refine of the CYL’s 6 Refines. She would deserve it.

I honestly dislike Brave Chrom because of how he shares the same gimmick as his Legendary and Duo variations.
[the ability to basically swap with an opponent and then immediately attack, while also jumping back.]

Well, seeing as this is now the +10 Brave Tiki thread, I’ll just put this here. Did the summoning on and off, but I got there. After 1437 orbs. For 9 Brave Tikis, thank Naga for the spark and the freebie. I love how she looks with this hat, almost looks like a second summer alt. I do wish that she had a non-breath weapon, you know had her own “Falchion” so to speak.

Congrats! You gonna swap her C skill out with Atk Res menace or a better skill?

Which support units do you use for her?

Nowadays I mainly run Pulse Smoke on her. Defense/Resistance Menace is mainly reserved for when I use her in Arena.

As for support units, I mainly support her with Velouria and Fallen Ninian.