What is good low star servant

I was clear CCC challenge quest with low star servant

so I have a question what is good low star servant?

Are you asking about good low rarity servants in general, or for this quest in particular?
If in general… https://gamepress.gg/grandorder/servant-tier-list
Sort by desired rarity.

I will check thank you

Here’s Honako Green’s list based on his experience as a mostly low star player. 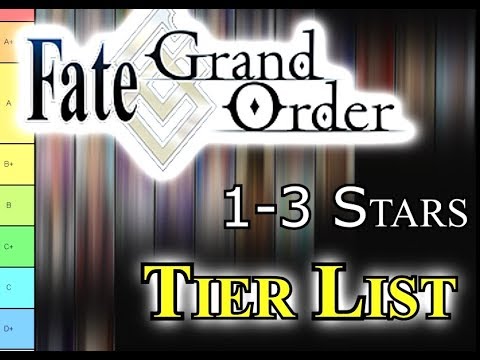 Note: This is a overall usage list, so one could argue for a higher placement for certain servants and it is a JP list.
2 Likes
Ivory_Black March 3, 2021, 1:52pm #5

I’m heavily against this tier list since Honako looks at units only through of prism of so-called “challenging” content and mashes together ST units with AoE units
Romulus, Medusa, Avicebron, Shakespeare and Gong should be placed higher. Darius, Touta and Kid Gil imo should be in same tier.

I still like hearing him discuss why he believes each unit is where it is more than just the tier list itself.

Andersen and Mozart at the top of bronzes because they’re the most applicable and consistent servants even if in some situations servants like Chen Gong or Asterios would be way better (however i do agree Chen should be at the top).

Darius, Touta and Kid Gil imo should be in same tier.

Touta has Protection from Arrows, a upgraded NP, a super effective mod, some party utility through his 3rd skill and a self 3 turn steroid with a heal, he is way more self sufficient than Kid Gil.
About Darius the list was made before his buff so he didn’t have a steroid and his guts was 7 turns instead of 6.

Mozzart,Arash don’t forget to add them.

Touta has powermod, not SE

But the thing about Darius is that even without buff, he should be placed higher just because without any skill investment (since his kit is entirely defensive) was dealing nearly the same damage as lored Kiyohime (and outdamaging her on enemies that she can’t def down). He also (yes, pre-buff) outdamages NP2 Lancelot and NP1 Tamacat
Darius is absolutely underestimated, especially as a recommendation for new players. For very small price of ascending 4 times and doing two Interludes (NP buff is behind second interlude) you’re getting good-to-go AoE berserker.

And the part about praising Touta for his defensive capabilities is a proof that you entirely missed my point - my main problem with Honako’s tier list is that he skips over farming aspect of the game and focuses entirely on the challenging content. In the game where 80-90% of your activity is farming
I’m not saying that any of the forementioned servants are bad, It’s just that - in my opinion - this tier list isn’t good, skipping over/underestimating units that you can utilize not only when there’s a CQ/new story chapter up
And point about mashing together AoE, ST and non-damaging NPs together applies regardless of our opinions

I can see where you are coming from. I think the tier list is more or less just to give people a good idea of a character’s overall utility/power, which is why he puts more self sufficient characters at the top and characters like Darius and Lu Bu, who have damage but little survival or support, below.

I’ve never liked the idea of a single tier list exactly because it misses context of where each character works best (farming, challenging content, general use) but it is still an easy way to visually show more or less who one should prioritize in a long run.

Touta has powermod, not SE

Sorry, I mixed the two.

In longer run I see Medusa being more useful than HFH

I disagree, i have yet to need another DPS Assassin other than Hundred Faces with Shiki mostly being my Nuker (30% charge).

Hundred Faces’ looping is really hard to match, her self heal, short cooldown Evade and big crit rate down make her way harder to kill while she ditches damage. That is something my Wu, Chiyome and even my Shiki to an extent can’t do.

Meanwhile i have way more Riders than i need, between Astolfo and Rin, Medusa already has a hard time getting a job but even in the low rarity side the only thing she has over Blackbeard and Alex, who have comparable damage and more support, is her static 20% charge.

so in longer run I see my Medusa being used more than HFH.
And I’d say that best thing about Medusa is that the charge is static. Since that makes her need investment in only one skill. I do agree, it could have been bigger (even just 25% to fit MLB IE would be really nice) since this way Astolfo is obviously better choice, but I personally like tossing her at neutral class trash mobs (wave 1 of Deming or Castle of Snow and Ice for the instance).

I do agree, you’re making fair points on HFH and I can see her being used by someone unlucky enough to not have options (not just assassins, since Mecha-Elis and Jalter zerker also imo are good anti-rider options and i know that people starting FGO recently missed them), but I can’t see her being used more often than Medusa in a longer run
And HFH vs Medusa was just a random example of what I find a bad placement in the tier list we’re discussing,

In general, a Servant’s placement in a tier list is less important than the reasoning behind it. As long as you understand why, then you should be able to make your own judgement.

So, take any tier list with a grain of salt.

damn. I know jeanne hasn’t been buffed, but calling her a low star servant because of that feels insulting

OG Jeanne and Mash are my go to Stallers.

Personally I’ve found Bedivere to be a very good low rarity Servant. Hits like an effing truck though his problem is the fact he’s story locked. Thankfully, Chaldea Boys and Class Banners are coming up so extra copies of him are able to be gotten.