What/Which Banners Mean A lot to You?

The three-quel to the trilogy of “What” (What Do Your Units Mean To You? and What FEH Player Are You?) is which banners mean a lot to you?

The L!Celica banner means a lot to me because it was the first banner I summoned on when I returned to FEH after a long hiatus.

The big May 2020 banners (Fallen, Bridal, Mila) are next. May was my cake month and I had enough bday luck to get at least one 5 star unit from those banners.

CYL4 banner is next because it was the start of online school, so it kinda represented me starting anew, in a way. I also had really good luck on that.

The last banner is Goddess’s Servants because it is the start of in-person for me, so it signifies returning to school. It also helps how some of them are teachers. I also finally have a friend at school I can talk about FEH with, as I didn’t have any before. We bonded about FEH with this banner. My +1 +Atk Shamir reminds me of him, since he suggested I merge Shamir to get rid of her -spd.

Anyway, that’s all from me. The trilogy has been finished. A new trilogy may be started based on the performance of the “What” Trilogy

But, what banners mean a lot to you?

L!Chrom banner cuz the amount of Chroms i got in so few orbs was crazy

And Hel Banner cuz that’s when I finished Thrasir

Duma’s mythic banner was my first memorable experience as I ended up pulling four 5 stars in circle, haven’t gotten lucky ever since.

My absolute favorite banner was The Mother Vs Sons voting gauntlet banner, as that was when I first summoned Mikoto and since then she’s been my main healer.

The second set of fallens, because it was probably the luckiest I ever got. In about 45 pulls, I got 3 Julias, 2 Corrins, 3 Lyons, and 1 Ike (plus I chose him as my spark). Generally my luck is bad to awful, so that was an incredible time. I also got Fallen Lyon as a free pull when he showed back up, so it kind of felt like destiny.

As for his other alts’ release banners… OG didn’t come home on his release banner, instead on the Hero Fest in august 2017 where I pulled 2 of him back to back. Brave was my free pick when he came out. Legendary was hell to pull, he burned through 220 saved orbs, the orbs from the TT that was running during his banner, and the 50 anniversary orbs before showing up on a yolo summon when I had 6 orbs left.

Legendary Tiki’s intro banner where I got my final merge for L!Ike. This was during my “collect them all” phase when I didn’t think I’d ever be able +10 anyone, let alone my favorite character in the series. It was like fate.

It’s kind of ironic now that I think about it since L!Tiki has been the bane of my existence now that I’m actually trying to merge someone on Legendary banners now

The first Bridal Banner. (The Caeda, Lyn, Charlotte, Cordelia one)
The banner was launched right when I started playing FEH and it got me my first 5*: The +Hp Charlotte.
Too bad I lost that account
Oh, and the L!Edelgard banner. Because it got my friend into FEH.

She demands your respect now

I don’t have a ton of banners I have that kind of special attachment to, but there are some that stand out.

One is the Bonfire banner from last year, that had Idunn, Nah, and Myrrh. I was absurdly lucky. I got four Idunn in a pack of orbs, which set her on course to be one of my first +10 5* units. I also pulled my first Myrrh on that one. It was fantastic.

Legendary Edelgard’s debut was also pretty great. Nagi was one of those units who had pity broken me quite a bit, and had really valuable fodder. Combining Edelgard and Celica, two of my favorite protagonists in the series, was a huge bonus. Everything about that spread was divine, and that’s probably the first time I actually whaled for something. I got my Celica to +10, Edelgard to +6, and enough Nagi to satisfy all my DC needs. No regrets.

On a more sentimental note, the Blazing Blade banner we got this year. That was the first New Heroes banner with Blazing Blade we got since I started playing in October 2018, so I was really feeling like we were overdue. For me at least, they didn’t disappoint. I mean they kinda did, because no Limstella or Nergal. But Fiora is not a popular character, and already had a Summer alt we got for free. I never expected her to get in as a base form. And yeah, she’s not very good, but having one of my favorite characters from that game in as just a beach alt was devastating, so I was really, really happy she got in normally too.

A recent one is this year’s CYL banner; after getting the free Edelgard, I took the regular free pull and got ANOTHER Edelgard. That caused me to take the plunge and spark for a third; that was a fun time. And it was one of the first banners where I had FEH-playing friends to share it with.

Heirs of light banner was by far the best banner this year for me (so far) because it featured 4 of my favorite characters all whom I loved in Genealogy,I +10’d 3 of those units and planned to +10 the 4th,but I decided to hold out incase Thracia Ced gets in A.K.A alt (on the fence with this 1

The Nohrian Summer Banner (of this year)! I got so lucky on there and got no pitybreaks and only the unit I was going for :D

Both featured some of my favorite characters from FE4, especially with Sigurd and Quan, the latter of which I managed to +10 on his debut.

Heroes with Rouse Skills (July 2020) would be a close second as it allowed me to obtain the final merges for Perceval, my main merge project at the time.

Aight, here are some of them.

I still remember how happy I was to get 4 Sonyas in a row from yolo pulls.
I +10ed second best girl within a pretty good ratio spent/profit and even got Linde to +3.

There’s the L!F!Corrin one too.

Show Off Your Summons! (Corrin - Child of Dusk

Hello everyone, the results of sniping for L!Julia and Naga are up.


L!Julia and Naga were together on this banner and I really like those two, specially Julia due to character more than gameplay assets.
Also, getting L!F!Corrin with very nice IVs of +spd/-def was really lucking out, she’s been a lifesaver for me in the last [Limited Hero Battle] I had to bring her, with L!Marth.

Good day!, so I did what I said about sniping blues and well it’s unbelievable: I got her within 22 orbs!, I’m really happy with my pull and not going any further, as I’ll have many orbs for Sonya!

. IVs: [zaba] Well now I’d like to know, how was your luck? could you get who you wanted?. I wish luck to everybody :birbpeek:


It’s a godsend that this banner was leaked, it strengthened my willpower to save a lot.
And I got her with good enough IVs: -hp/+res. Within 22 [Orbs] from what I see which is an excellent trade and still left me prepared to pull for Sonya on the first time she appeared in a weekly banner (the one linked above). 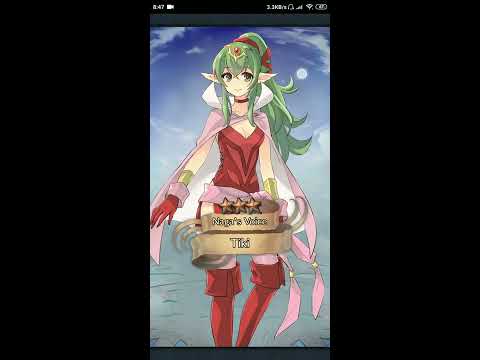 I loved her aesthetics and researched a little of her character, spoilers weren’t a big issue since I almost finished FE9 and finished FE10 so I needed a good memory refresher.
It went well and didn’t generate major repercussions during my savings (96 [Orbs] spent), I even got a B!Fjorm which I wanted so much for the [Isolation] effect and the special ingredient: feeling kinda attached to her, I’m moreso neutral, but nonethless, I’m glad I got her and with +hp to boot too.


A year after, best girl gets an alt.
Surprisingly enough to me, I was sorta ready in terms of [Orbs], still, didn’t see this one coming but hopefully, this little experience encourage others to practice [Orb] saving.
I spent over 500 total but overall it went quite well, most importantly, I got my best girl and she looks so lovely with the bunny attire. I still would’ve preferred Sophia as her partner but I’m fine with Fae.

And lastly but not least…

I wasn’t really interacting actively here on #gamepress back then so I can only tell from memory that this and Sp!Palla’s addition put an end to a vicious chain of rerolls with my targets coming with optimal IVs under 60 [Orbs] spent on each banner.
On top of my head: Idoun was +def/-spd and Sp!Palla was +spd/-res.

I tried to recall more but that’s really all I believe.

I have a lot that mean a lot to me.
The first memorable one was L!Lucina’s debut banner were I got

And a W!Lissa all within 60 orbs, and it was where I started going after specific colors rather than full circles.
Then has to be the Ploy banner long ago where I pulled my first Lute.

And finally the most recent Fates banner that just kept giving me Rinkahs, like it was insane lol. I think I have two banners I adore:
The first Halloween one and the last Christmas one.
They just have the perfect lineups of characters to include wish the TT would focus on Zephiel, though.
But if you mean those that hold a special place in my heart…
Well, the Fallen banners always include that one perfect unit (that I usually get), so maybe those?

I love chicken, so the banner with the most breasts and thighs mean a lot to me.

Desert Mercenaries and Adrift are what come to mind

Former was great since it added a whole bunch of guys I wanted in the game, the latter was one of the first Banners I ever summoned on since I started playing around it’s debut.

For me, guess it’s gonna be what banner will mean a lot to me. It’ll maybe be a while, but I can tell it’ll definitely be worth the enormously long wait.

For me it was this Banner. I am so happy we got both Flayn and Seteth(who will soon be +10). The next one was the Halloween Banner since we finally got some Goldoa dragons + free Ena +Xane. Not Kurth but I am still super happy. Getting Rafiel was also somewhat nice and Rhys since he became a very strong unit for me. But if it is about my fav Banner this year I would say this 3H Banner and the Halloween Banner.