Which emulator is better?

So I’ve decided to switch onto an emulator to make it easier to farm due to macro recorders (on iPhone, can’t use FGA unfortunately), but I don’t know which one to use. I’ve heard about both Nox and Bluestacks, but people seem to be pretty split between them. Is one better for macros? Is one safer to use?

I know there are others who have no problems with it, but for me, FGO NA has been horribly unstable on Nox with Android 7, while its Android 4/5 VMs don’t support FGA.

Bluestacks works fine with both for me, so I’m sticking to that.
Also, for me enabling Virtualization for multi-thread support was also extremely unstable on Nox, while without it, performance is notably better on Bluestacks.

Every other emulator I’ve tried to run FGO NA on was extremely unstable or wouldn’t even launch it at all.

I couldn’t get NOX to run stable, Bluestacks has been fine for me, a handful of lagging/frame dropping moments every odd month.

In terms of writing your own automated actions, Bluestacks is easy enough to do it in, just follow their language guide. It won’t do anything smart like auto pick supports or cards but it’s simple enough for just opening lotto boxes.

If your emulating android aren’t you going to end up using FGA anyway?

Oh wait that’s true haha I didn’t even think about that. I think I’ll try out Bluestacks first then and I’ll just download FGA as well!

Make sure to use the settings recommended on FGA’s github page: 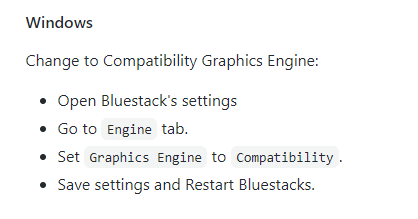 And while you’re in settings, DirectX also works better than OpenGL for me (iirc it was FGO itself that runs better with DX than OGL in BlueStacks).

I use bluestacks, every once and a while it will freeze in like the first 20 or 40 seconds when I load into the game but other than that no problems

I have FGO on Nox - mostly because all the other games I play work pretty well on it (my main FGO platform is still my phone). The game itself works just fine but I didn’t get FGA to work last time I tried (either root or non-root) - it installs and starts and I see the image recognition working in debug mode but it doesn’t actually do anything in battle.

Probably I’m doing something wrong - didn’t spend too much time testing it since, like I said, I mostly run FGO (along with FGA) on my phone. So based on my own experience I’d say if your main goal is running FGA I would probably try Bluestacks first.

You might just have to upgrade Nox to Android 7 (see tutorial on their website, it’s not an in your face “click here to upgrade”). FGA doesn’t run on Android 5.
When I did upgrade to android 7, I felt that the game looked better as well (stuff like Anti-Aliasing)

I haven’t had any trouble on Nox overall, but I also have the computer oomph to give the VM all the power it can ask for (Virtualisation enabled in BIOS, dedicated 3 cores and 3GB RAM if I’m not mistaken).
A well known problem would be losing the sound at some point, but I’ve narrowed the reasons to a mere lack of available ressources apparently. Sound has even come back without closing/restarting FGO or Nox, restarting chrome when it’s becoming a memory hogger can do the trick for example.

I would suggest trying OpenGL graphics first because DirectX was inducing a minor bug last time I tried. IIRC: you can’t “hold select” servants/EXP/… cards when choosing what to feed to your servant or CE in the various “enhance” facilities. Really not the end of the world, but slightly annoying those rare times when you need it =D