Who would win: goku or gilgamesh?

If Emiya could beat Gilgamesh… Feetku is way out of his league.

Who would win: Gilgamesh or Saitama?

I have no idea where you got this “fanboy” idea from in this thread.

The real question is: WHY?

My main impression on all these cross series who would wins is that its entirely dependent on the scale of their fantasy. Like Naruto is OP in his universe, but Dragonball Z literally had a planet destroying antagonist at its first chapter. The strongest Hunters would still probably lose to most Shinigami.

In this case, I’d say given the fantasy of Fate and Gilgamesh, he would lose. Like from what I gather, the latest arc of Dragonball is basically analogue to a tournament of Types in the Fateverse. Plus unlike Gilgamesh, Goku’s narrative lets him cheat death multiple times whereas mortal Gil didn’t attain immortality and Servant Gil can lose his spirit core.

For Saitama, I believe the rule is whatever outcome would be the funniest so if its FSN Gil, his arrogant ass loses to this bald random bystander. If its Carnival Phantasm Gil, he still stands a chance.

Gil has some stupid stuff, but no where near as stupid as Goku.

Only one spiky haired blonde can exist! They fight for the right to the style. If Goku wins, Gilgamesh needs to stop geling his hair. If Gilgamesh wins, Goku needs to use his scene kid blue for all his battles. Really high stakes over here.

I think Goku probably wins by a few planet nukes

Probably Goku, it’s just gonna take a couple seasons for him to power up.

well it’s hard to say… if it’s hand to hand combat Goku has higher chance of winning (due to a certain faker said " You’re a king, unlike other servants you don’t take the path to master weapon"

If it’s nuking, Gil probably win since his casting time for Enuma Elish is only 30 second ± while goku take around 2-3 weeks minimum to cast his Kamehameha or Soul Bomb…

Maybe he won’t have to use this transformation because a zasshu like shirou could win against Gilgamesh.

Gilgamesh would get his sh.t kicked in if they ever fought

Goku would lose.
Gilgamesh would take him seriously.

Let’s suppose Gil doesn’t take Goku seriously and then loses.
Gil would still win because Goku would give him a senzu bean and then Gil would defeat Goku.

Not super familiar with Dragonball but I would assume Goku would win as he has the greatest superpower. All hail, plot armour

Depends on which Goku we are talking about.
Spoilers:

But the real Q is by even considering such a meeting between them, wouldn’t that necessarily force us to consider an equivalent scaling of lore?
Gilgamesh’s clairavoyance should allow him to know of the existence of beings like Goku (I think I’m not sure), maybe even their weaknesses, and he should have things in his gate of Babylon of similar power or more broad if we admit the blending of such different realities.

I guess what I’m trying to say is that Gil himself would be more powerful or formidable canonically if Goku existed in some form in the same universe/multiverse, because allowing for their meeting changes the fabric of Gil’s existence and what we would expect him to know or have due to his lore.

Regardless, with Ultra Instict Goku would certainly destroy Gil. Unless Gil also mastered UI, but that doesn’t mesh with his King vibe.
Maybe he could have a treasure that enables him to disrupt the energy of enemies, but even if he did we have no reason to believe he can follow Goku’s movements at top speed.

He is way stronger than Sanzang and therefore should be able to curb stomp Goku…who is a joke character so far in fate: 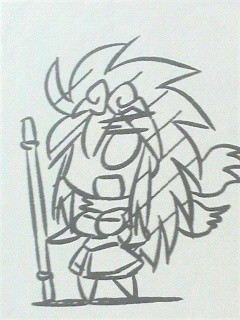