Yamask / Cofagrius ... will it live up to the hype?

I wanted to ask the PVP gurus out there if they think Yamask / Cofagrius will live up to the hype? Although it is spawning fairly well now, it looks like a long,long haul to 296 XL candies to get a level 50/51 one. I have already caught a few “outstanding” Ultra League IV candidates, so trying to decide if I want to commit time and resources to this Mon. Despite spinning a lot of discs I have not seen a single “Catch 25 ghosts” research task so I guess the only source is wild spawn, raids and the few special research rewards. Is Yamask a reward in GBL now?

Never had a yamask as reward in GBL. Just looked it up, it’s not in.
Hype? Is there one? There was a short lived one for GL when it got shadow ball, but it’s rare in battles. I used one, and it’s good, but I think it’s difficult to fit in, especially with much dark around. This is also the same reason I wouldn’t invest for UL - with Umbreon and goon around the chances are high that it get walled. Great spice though for sure and an interesting lead or closer option.

Cofagrius is good, thing is there are a ton of ghosts in PvP. Yes, it can fulfill a role no other can do, but the lack of coverage really holds it back, and there is little room for improvement in terms of moveset.

Gengar is the way to go for the mayority of people, drifblim has icy wind, Jelli is a tank with unique typing, the new pair of plants are going to be amazing, and giratina needs no introduction.
And that’s just ultra, in great there is even more competition.

My advice is try to collect as much XL candy as you can (because yamask so far has been a halloween Pokémon only) but there is no rush to make one at the moment. There is also the chance runerigus (galarian mummy) will get shadow claw in the future, acting like a kind of nidoqueen with a unique typing (sorry golurk does not count). This is way more promising in my opinion, now that galarian yamask is “highly distributed”, and both yamask share candy.

Really wish I’d read this thread a few weeks back before I started targeting yamask candy for an UL Cofagrigus.

Well, it’s the best ghost running shadow ball and it’s still only bad vs dark and normal, most importantly, it can beat GirA better then jelly and Gengar. An ABB team running a double pseudo fighters (escavalier/goon/melmetal/regi/poliwrath) in the back will be excellent. Personally, i just see better ways of spending stardust and XL for master League stuff, cause i can use it in raids… And of course registeel is THE XL thing in UL. Just a bit more difficult to get XL candy for ;)

I’ve got one in the best buddy rotation for eventually. I agree that’s pretty down the list for the XL UL treatment. Skarmory and Umbreon top that list, some time after those, sure

I’m sad that Golurk isn’t very good yet. Got one shotted by an Aqua Tail yesterday and felt embarrassed.

Think I’ve seen somewhere that cofigrigus wins against about 76% of the open ultra meta. However it’s about to be eclipsed by trevenant when that pops.

Exactly! That’s it’s niche, but it’s not an essential Like azu in great league, you have plenty of options to choose from.

I wouldn’t say best ghost running shadow ball, it’s the most dependable one (because of the combination of great bulk and shadow claw and ball). The matches you win, you win comfortable. The ones you lose on the other hand are very bad.

That’s what initially thought. But it seems it’s wrong and a bit more complicated than that. Of course Gengar with double ghost moves (which is what many, if not most, people run) is exactly that (not Seen in the win chart cause many never used types are in the middle). It wins hard or it loses hard. It’s glassiness and poison typing gives it some weaknesses to neutral (cause glassy) and ground/psychic - it’s counters such as Umbreon, swampert and obstagoon mandibuzz Snorlax are all in the 50 to 200 range. Still impressive though and with sludge bomb it changes a bit. Jellicent however, has serious hard counters as you can see. What the pic hides is of course that many of these counters are rarely run, but since Venusaur is in the hard counter range, it’s still debatable. Why grass - it has ice beam? Cause grass is faster and frenzy plant hits harder then the mediocre ice beam. Of course the dark counter wins are less severe (around 200 to 250) Oh i ave to hurry up, here the chart of cofagrigus (all 1vs1 shield btw). More mid-ranged than I thought due to its thickness. But of course, mons like Umbreon beat it with less than 200 again. Drifblim is similar to jello, but a bit better cause fast grass types are not a problem.

So in the end, you get some slightly (!) better wins with drifblim and jellifish vs dark , but at a cost with severe losses vs electric, grass types (jello) or ice (drifblim).

But hey, now we have trevenant XL, the new king of UL anyway ;) (if the bait works)

I’ve been making the most of the candy boost for the start of Pt2 today, I’ve caught #14 Little Cup, #74 GL and #27 UL XXL Pumpkaboos but precisely zero useful phantump/trevanant.

The event is yet young and I’ve completed my CofagrigusXL, so now for a little more topping up of my XL Shiny Lucario (OK that’s not Halloweeny but it’s been on my to do list for ages) and hopefully still time for a bit of frillish xl while the XL candy is freely flowing.

My solution to the ghost related problem? Get them all.

You wanna trade them anyway I guess

To Oaf: yeah bro, that’s why I asked the question. I had overly high expectations for Yamask based on the stuff I read online. Fortunately I did not set Yamask as my buddy during this “guaranteed XL walking candy” phase.

You mention the “new plants are going to be amazing”. Are you suggesting that Trevanant and Gourgeist are gonna be PVP powerhouses? If so, I better increase my focus on these. I did not see any “hyped up reviews” for those … anyone read anything on them?

Trevenant yes. Both UL and GL in the top five at pvpoke for the 1-shield. But, as said above,when the bait works. It is heavily dependent on bullet seed vs dragons, fliers and neutrals.

Not yet, as I’m so short on PvP options I’ve gone all hoardery and Gourgeist ranks about 60-ish on pvpoke for those leagues. Plus with the double-double-double (pinap dependent) candy I’ll have no problem evolving and powering up. Later on, I’ll likely not need them as much. Phantump seems significantly rarer so I’ll probably need more time to find a good, or at least passable, one and build up the candy.

Gourgeist i also don’t care about, but i hoard some high level phantump for UL trading…

Yes sr, both grass and ghost play a very important role in the meta, and the combination in a Pokémon is quite good. The moveset is also the best both can get, so they are indeed quite “the meta” at the moment. Trevenant imagine a grass sableye, not so good typing defensively but better moves in general. The pumpkin will live in the shadows of the tree at least for now, but this does not mean it is bad at all. 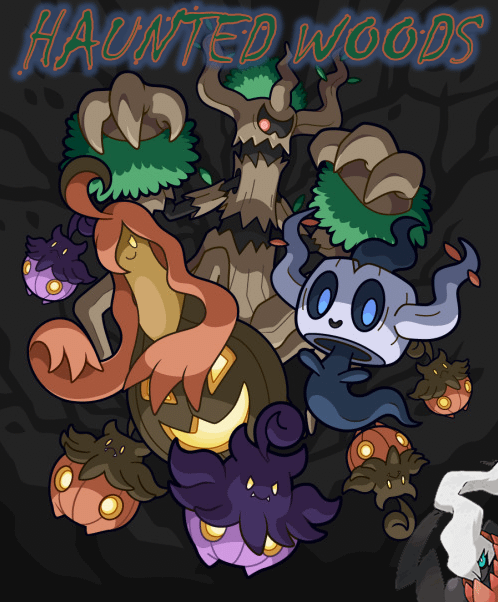 The pumpkin will live in the shadows of the tree

This is the name of my new Halloween black metal band.

something tells me that niantic will eventually give it a bait move. maybe next halloween